When using WhatsApp Web (on Chrome with macOS Catalina) - when I want to insert an emoji, I open the emoji popup, but then the emoji appears at the beginning of my message, instead of at the end. This happens both with R2L and L2R languages.

Here for example the order of actions was: 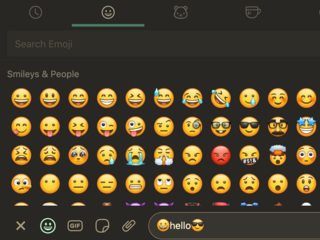 After I open the emojis popup, I can move the cursor to the end of the message and then the emoji will appear in the right place. But... That's quite an annoying habit. So...

Any ideas on how to fix this?

1
Selecting a whole line of text, including the newline
1
When typing on Bluetooth keyboards, letter sometimes infinitely repeats while not holding it down
3
WhatsApp notifications show contact name instead of sender-defined name
1
WhatsApp web without camera
1
WhatsApp web option not displayed in WhatsApp iPhone
3
can't find “WhatsApp Web” on my iPhone
1
Activate Emoji & Symbols and Character Viewer independently