I have an OTG device that exposes a network interface over USB-C, providing a DHCP server (think a raspberry pi or similar). When I plug it into my Linux computer (USB-A on the computer, USB-C in the device), then Linux shows a new interface with an IP, and I can SSH into the device.

On a Macbook (where the Macbook also has USB-C connectors), it does not always work:

What could be the reason for that issue? And optionally: is it correct to think that the Macbook USB ports are not OTG but always host (I have never heard of an OTG port in a computer, not sure if that's a thing)?

Note: it seems similiar to this old unanswered question.

EDIT: as required, the System Report when it works. When it doesn't (i.e. with the usb-c-only cable), then the line just does not appear in "USB 3.0 Bus"... 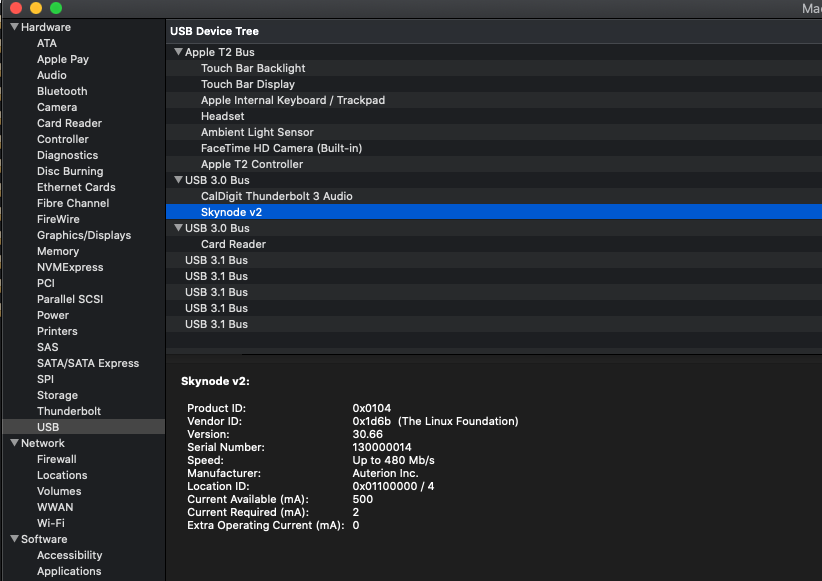 I think the problem is that your USB-C to USB-C cable is in fact power only.

The setup you have should work when you connect it directly, but you write the USB part of System Report gives no indication that anything at all is plugged in. If you have used a charger cable that has no data lines, this is what would happen.

Try with a different USB-C to USB-C cable and it should hopefully work.

UPDATE: Based on your comments, the problem seems to be that the device itself doesn't actually support USB-C fully. You'll need to configure the Linux kernel with the CONFIG_TYPEC option in make menuconfig in order to have support for USB-C build.

Not the answer you're looking for? Browse other questions tagged network usb ethernet .