Why does Microsoft Messenger 8.0 crash when I open a new chat window?

Microsoft Messenger For Mac 8.0 crashes sometimes when I try to open a new chat window. Moreover there is no any error logged in Console.

My system is Mac OS X 10.6.5 at a Mac Book Pro. Find the screenshot showing the problem here: 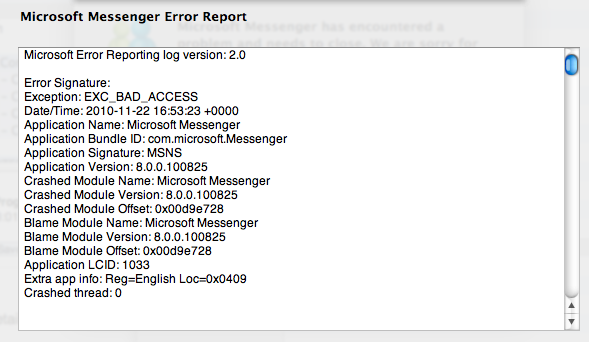 It’s a typical BAD_EXEC. This could be related to two main things:

What can you do?

A simple test may be conducted by creating a new blank user in your computer, restarting your computer and using Messenger from the new user. This will rule any possible software problem with your user. If Messenger works fine under the new account, then further analysis of yours will lead us to try to find what’s interfering with MSN.

If it fails to work under the new account too, then the problem lies either in the MSN, Your OS X in general (weird but possible, usually a new user fixes 90% of the problems), or, worst case scenario, in your Hardware.

I suggest you try to above and take an action course. As a last resort, don’t hesitate taking the machine to an Apple Store/Genius Bar for further analysis. They will be able to provide you with much more information that what we could from here.

Not the answer you're looking for? Browse other questions tagged crash .

2
System Preferences crashes when trying to open time setting
5
New hard drive in Mac Book Pro leading to occasional crashes and kernel panics
4
Computer keeps crashing after I replaced the RAM
6
MacBook Pro (Retina, 15", Late 2013) is crashing frequently
0
Should I reinstall the operating system on Mac Book Pro if I get lots of crashes?
1
How can I fix constantly resetting HD 4000 GPU?
0
Need help in figuring out why my MacBook (mid 2012) crashes even after reinstalling ElCapitan
13
Plugging in external monitor “logs out” (crashes?) user session
2
macOS Mail crashes when window is closed (app brought into background)