How do I troubleshoot screen capture utilities only capturing one side of audio?

I use screen capture utilities like Movavi and Snagit on my MacBook Pro 2019 (Big Sur) to record software demos. When using a headset or any other microphone connected to a USB port, the recorded audio is in stereo.

When I use any external audio interface (PreSonus Studio 24C or Behringer U-Phoria UM2) as the captured audio source, I only get one side (the left side) of the audio. Using either interface with an application that doesn't capture the screen in any way works perfectly, clear audio from both sides.

I need to use an audio interface because the mic I need to make a good recording needs an interface in order to work with my MacBook Pro. I haven't had a lot of luck troubleshooting this, even through contacting support from Movavi and Snagit. I'm trying my best to go through all possible system settings and configuration tweaks that I can - is this a common problem with screen capture scenarios? I was about to chalk it up to a third-party bug, but this seems to persist no matter what utility I use, yet the audio interfaces work perfectly fine with any other software that isn't doing a screen recording and I'm a little baffled as to why.

The task as asked is in effect "how to sum two inputs to one, stereo to dual mono?" one side being the mic/line etc, the other side being just silence.

If you could persuade QuickTime, or any other recorder to record only mono audio this would be one way. If you need additional music etc that must be in stereo, then somehow you need to persuade the Mac itself to sum both yout input channels to mono.

I cannot seem to find any way to achieve that with the Mac itself, nor much of the commonly-available audio routing tools - Audio Hijack, Loopback, Audio-Midi setup etc, testing with Aggregate inputs & everything I could think of.

All I did manage to achieve was to sum before sending to the Mac. In my case, it needed the input software of my Line 6 interface. Setting the input to only one of the 2 potential channels Line 1, Mic 1 etc, then the software itself was doing the sum to mono for me & the Mac would then be happy to place it in the centre of the stereo image.
Setting the input to Stereo Line/Mic etc would send to just one side or the other.

Presumably, this would be considered 'expected behaviour' for a stereo source, though it does look like if you use the Mac's headphone input or a webcam etc, then it already 'knows' there is a single mic, not stereo.

Interface image, just as an example - 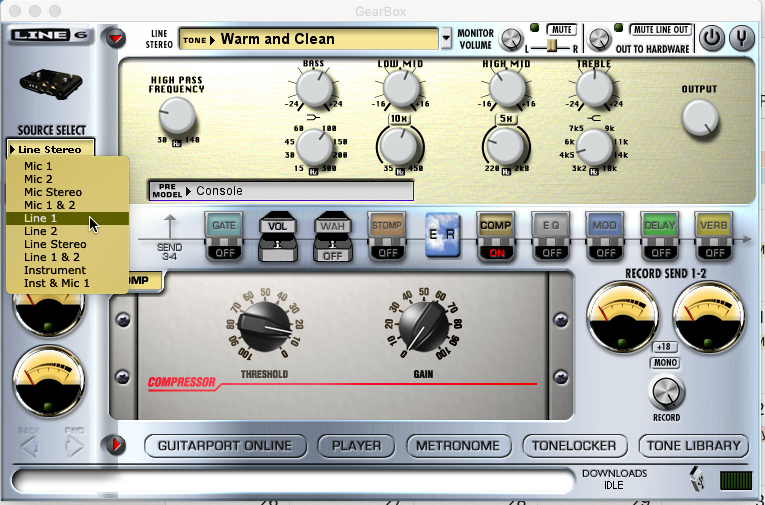 I didn't take the time to clean the 'amplifier' setup to be straight clean, so it still looks more like a guitar amp & pedals. That doesn't affect the routing, only the audio quality]

Not the answer you're looking for? Browse other questions tagged macbook-pro audio screen-capture .

0
How can I mix audio from separate devices and output to one device?
3
Convert *stereo* .mov to mono .mp3?
30
How to record screen with the audio coming from your Mac?
3
Capture both audio and video from iOS device via USB in OBS
0
How to record a screen with video AND audio on a Mac?