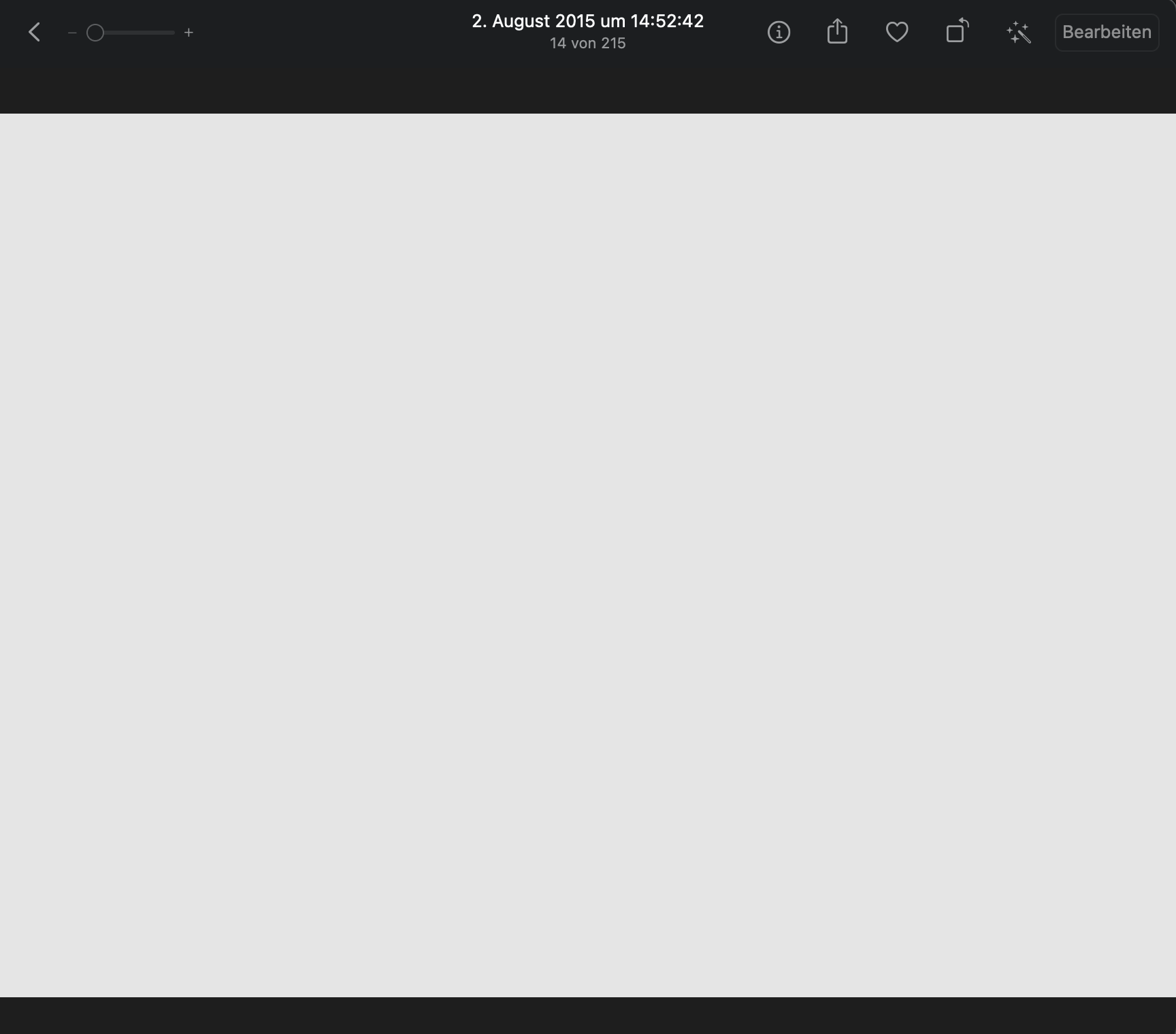 This is the same for all media, i.e. Live Photos, videos and portraits. However, all media is still in the library package (opened the files in Preview, no problem there) and all metadata (location, tags, lens info, date) is fine, too. Further, these photos are not camera-, location-, face-detection- or file name-specific. They seem to be totally random, however all photos taken before march 2015 are fine (I am probably reading into this, but Photos.app was introduced April 2015).

What I have tried so far:

More info about the system

My question is: Does anyone know how I can effectively get these blanks to disappear, without having to manually reimport all photos?

I have a couple more options/ideas up my sleeve, however, they will take a lot of time, so maybe someone here already knows a better/faster fix/idea than the following:

I have talked to Apple support. Further things that we tried, all to no avail:

It seems like I actually have already opened this library on BigSur as I just tried to open it with a Catalina Mac, which resulted in an error message, saying I would need to update the OS.

I talked to Apple support again. The engineers didn't come up with anything/they don't really offer database repair. Their "advice" was to manually rebuild the library and use TimeMachine so that there is not only one backup but the history included. I had issues with TM and external drives a couple years ago, thats why I didn't use it. This is one of the unfortunate cases where investigating the issues took so long, it would have been much faster now for me to rebuild it right away.

FYI, I have looked into the following posts:

However, none of these posts helped.

I hate to answer the obvious, but now that you are updated on the OS, I would try once to repair again and open a case with Apple. Worst thing is you spend a little time and someone here has a better answer in the mean time.

In the past there was a repair and a rebuild, but it seems Apple has streamlined their advice before you seek their help. I would hate for you to take more drastic action if there is a bug they have to fix on the rendering and processing side. What if your library is (and was) intact and the code needs fixing?

What's the file format of the missing thumbnails and images?

If JPG or PNG, try this: In Photos view, select a few blank thumbnails > in top toolbar, click Image > rotate clockwise > rotate counter clockwise. See if this force-recreates the thumbnails.

Photos for Big Sur uses reduced-size JPEG versions of photos and videos to display the thumbnails and full screen image views. These versions are stored in the Photos Library package (Right-click Photos Library icon > Show Package Contents > Resources folder. See this article for some more details). The reason for missing thumbnails might be some problem with these.

Not the answer you're looking for? Browse other questions tagged backup photos .

3
App or Service to Automatically Backup Photos in iCloud Photo Library?
0
Backing up just photo files from Photos library
2
How to replace or delete entire iCloud photos library?
2
Apple Photos Library Error 1000
0
Photos does not have the necessary permissions to create a library in the folder that you selected
0
How can I see where Photos.app thinks the System Photo Library is?
0
How do I downgrade my Photos library?