How to continue Time Machine backups from a previous computer?

I had MBP 2015 in the past and used Time Machine on it. Last September, I switched to MBP 16'' 2019 and did a fresh installation / manual copy of most of my home directory files, maintaining the layout.

Note: I wanted to do a fresh installation for various reasons but if I were to compare the filesystems in the end, they are almost the same – my home directory is still /Users/borekb, the folder layout under it is exactly the same, etc.

Now I'm trying to set up Time Machine again but I'd like to continue with my previous line of backups – for example, I want to see last year's versions of files that are on the same path. Also, my first backup on this new Mac should be "incremental" – I'd like Time Machine to compare what is on my current Mac with the latest state of my previous backups (from September 2020) and does a diff as usual.

The key to this seems to be the tmutil inheritbackup command, which I've successfully ran:

/Volumes/time-machine is a mounted network folder (I backup wirelessly to a Synology NAS) and the command seemed to work well – it did this rename:

I then went to Time Machine UI, selected the time-machine disk, entered my previous password for encryption, etc.: 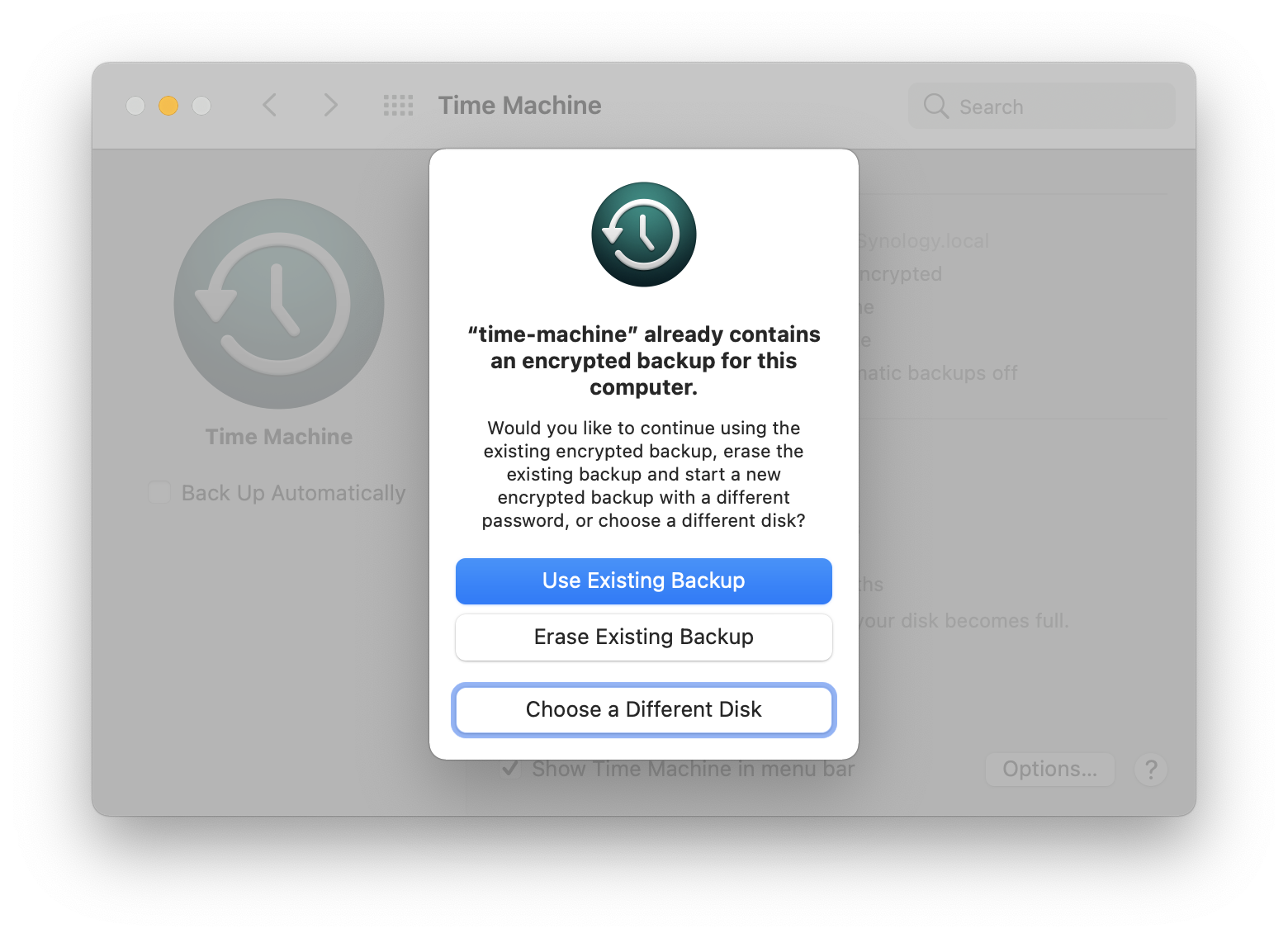 Everything seemed fine so far.

However, when I start backing up, it does a full initial backup to a new folder inside the .backupbundle that is called after my new computer's name: Borek’s MBP 16. This is what it looks like after I mount the sparse bundle and browse the /Volumes/Time Machine Backups/Backups.backupdb folder: 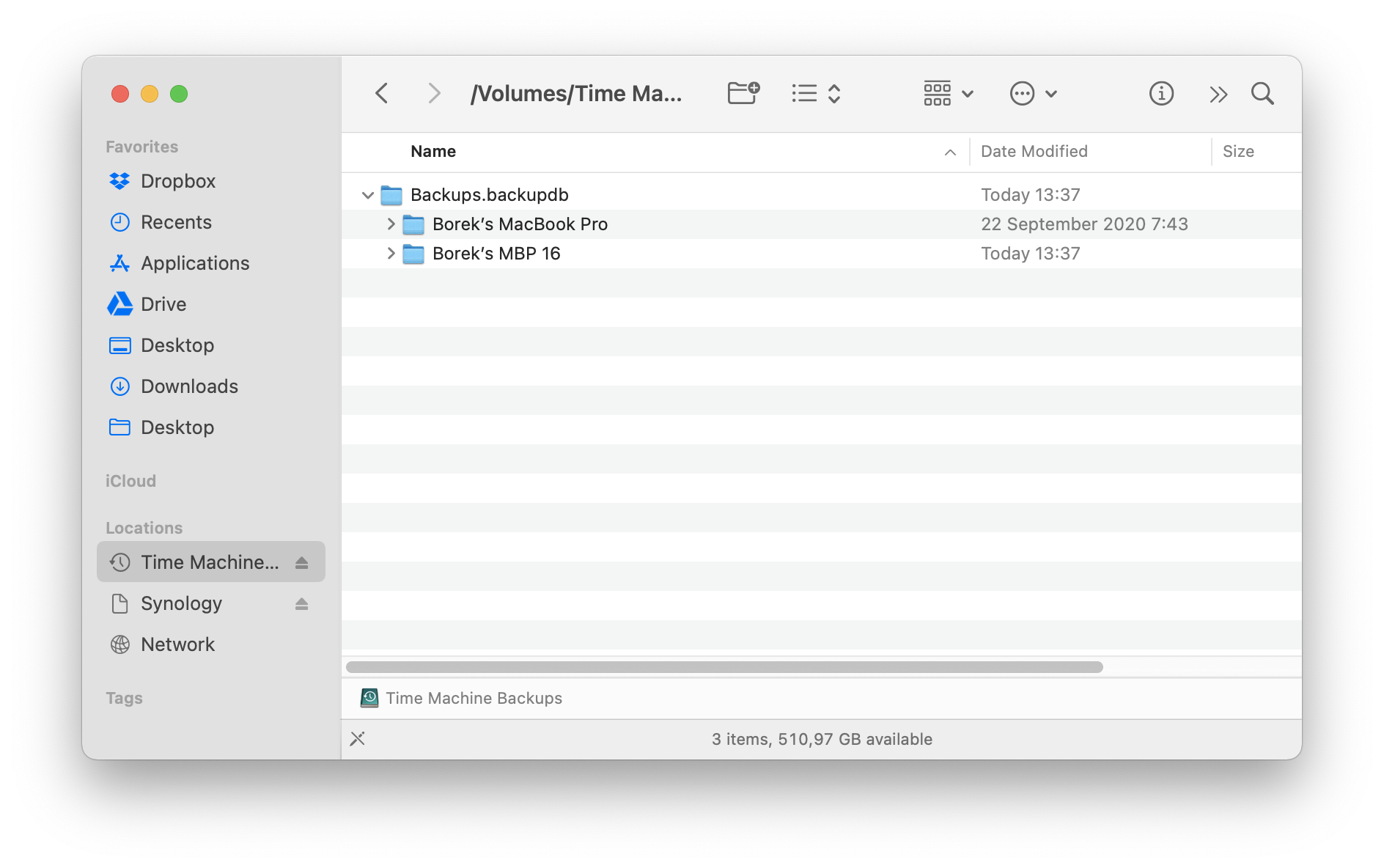 I somehow want to tell Time Machine keep using the original Borek’s MacBook Pro folder (the one that was last modified on 22 Sep 2020).

How to do that?

UPDATE 1: I tried changing my computer's name to match the old one but Time Machine still insists on creating a new set of backups from scratch – it just calls the new "machine directory" Borek’s MacBook Pro 2: 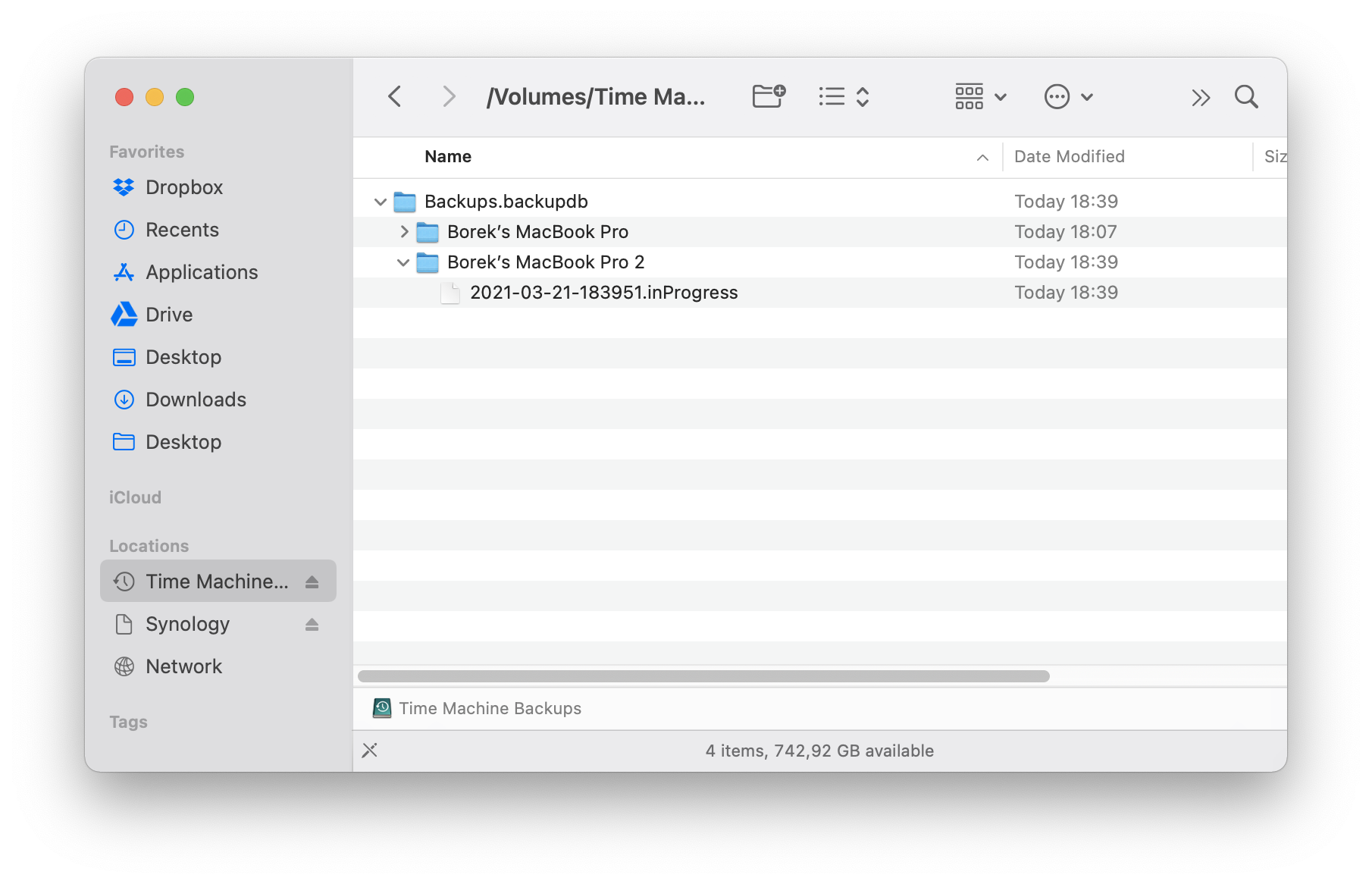 I have also ran this script, found here (as Big Sur doesn't seem to support -a), to run tmutil associatedisk an all folders found under the original backup location:

This also worked correctly but Time Machine still doesn't see my older backups and is attempting to create Borek’s MacBook Pro 2 when I try to run a backup.

UPDATE 2: I've successfully verified backups which was a solution in this answer. The preferences UI still report "no backups" so I'm now trying to run a new backup, which was Step 2 in that answer and the author wasn't sure if it's necessary or not. I'll report back in a few hours...

If you tap the option key while clicking the time machine icon in the menu bar, you can browse backups from previous or other computers.

Not the answer you're looking for? Browse other questions tagged macos backup time-machine command-line .

0
Time Machine Error - The backup disk is not available