What exactly is chflags opaque, nodump?

I've gotten to grips with the chflags man page so far, even if it's rather uncommon for man pages. Nevertheless, I find 2 parameters very peculiar. What exactly does chflags opaque and nodump do?

Long answer: both of these flags relate to Unix features that you probably never use.

Here is an example of the use of the nodump file flag.

Note that the file bye.txt was omitted from the archive because of the nodump flag.

Here is an example of the use of the opaque file flag.

The basic idea here is to allow modifications to be made to a read-only mount. In the following example, I will remove a directory containing a file, then create a new empty directory with the same name.

Below is the sample output.

To allow modifications, I created and mounted the empty directory changes using the -t unionfs option. Also, I printed out the mounts to pets. The mount command actually uses the mount_unionfs command to perform the mount.

Below is sample output.

Next, I used the commands below remove the directory named dog and confirm the change. 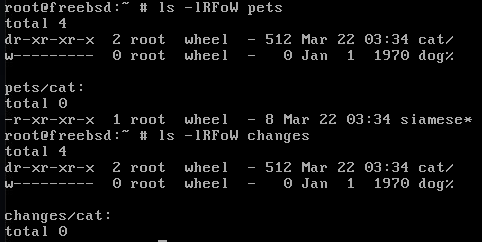 The whiteout dog masks the directory dog on the DVD. Next, I used the commands below to create a new empty directory named dog and show the changes. 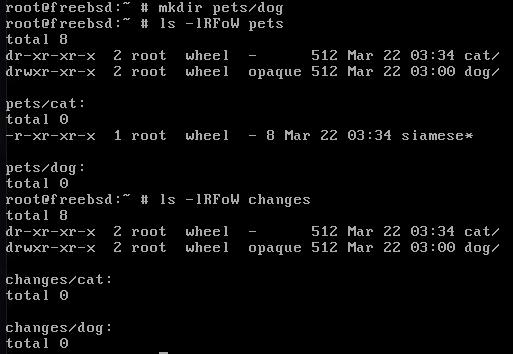 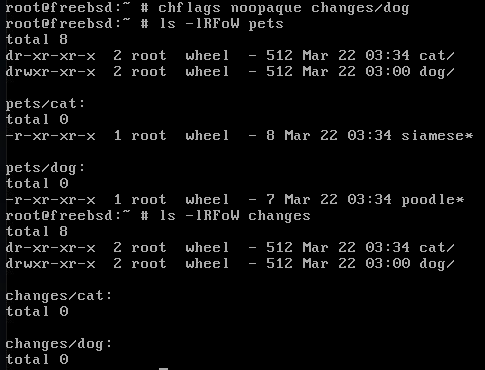 Without the opaque file flag, the file poodle incorrectly appears in the pets/dog directory.

The final commands below just undo all the mounts and changes made in this example. 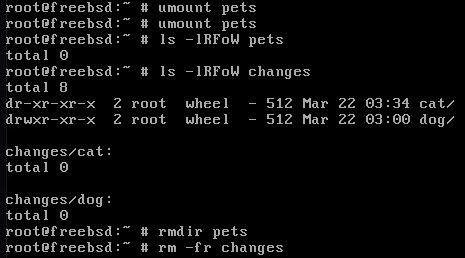 Note: FreeBSD was executed by first downloading the virtual machine ready file named FreeBSD-12.2-RELEASE-amd64.vmdk.xz. This file was used to create a VirtualBox virtual machine with a 2013 iMac as host. This file should also be compatible with VMware Fusion Player.

They are POSIX standard flags defined in stat.h and any unix program can read them with the stat call and the system writes and removes them in a standard pattern for compatibility with the dump and unionfs functionality.

Not the answer you're looking for? Browse other questions tagged macos terminal metadata tar command-line .

8
FileVault: What exactly is the optimizing step about?
1
Find all hidden files that were hidden using the command “chflags hidden filename”?
20
What does “Reinstall macOS” do, exactly?
2
Safari - Reload Page from Origin, does what exactly?
10
SMB share deadlocks since High Sierra
3
What exactly enforces secure boot on the iMac Pro?
2
How exactly is PATH calculated?
4
What exactly does “Disconnect from iPhone” do?
11
iPhone-Mac connection issue and what does the usbd process do?