How can I run newer Unity games on OS X 10.9 Mavericks?

Most games built with Unity 2018 and Unity 2019 do not work on Mac OS X 10.9. They will launch initially, and occasionally even get as far as the main menu, but invariably crash before entering gameplay. 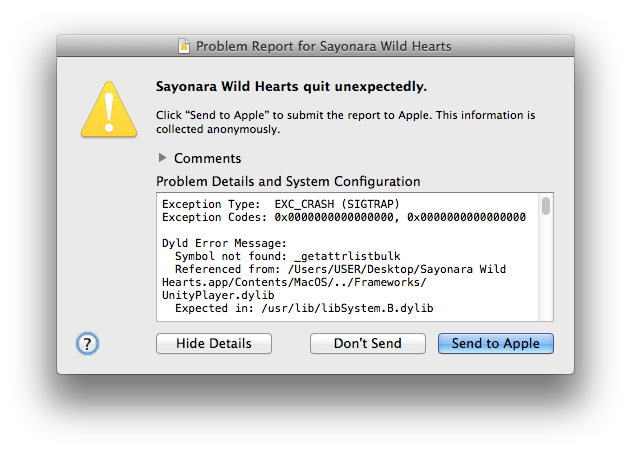 How can I run these games without updating to an ugly flat version of OS X?

The crash log indicates that the game is looking for a function called getattrlistbulk. Because this function doesn't exist in Mavericks, the game doesn't know what to do, and crashes. Ergo, in order for the game to run, we'll have to give it what it wants—a copy of the getattrlistbulk function.

(In other words, we need to write some code. Make sure you have Apple's Xcode Command Line Tools installed!)

getattrlistbulk is a part of the kernel, and I don't understand what it does. But, what if I didn't have to—what if Unity games don't actually need getattrlistbulk for anything important? If that were the case, it might be that getattrlistbulk wouldn't need to actually do anything for a game to run, the function would merely need to exist.

Only one way to find out! Let's give this code a try:

This copy of getattrlistbulk will always return 0, no matter what.

If you save this code as UnityMavericksWorkarounds.m, you can compile it with:

Now, we need to make the game load our new UnityMavericksWorkarounds library. This should be easy to do with the DYLD_INSERT_LIBRARIES environment variable. Run in the Terminal:

...and watch the game crash the exact same way it did before:

Let's look at the crash report again. UnityPlayer isn't expecting getattrlistbulk to be just anywhere, it's expecting it to be in /usr/lib/libSystem.B.dylib, and so isn't looking inside of our UnityMavericksWorkarounds library. This is due to a concept called two-level namespaces, which you can read more about here. And, although two-level namespacing can be turned off via DYLD_FORCE_FLAT_NAMESPACE=1, Unity games won't work without it.

(Replace Sayonara\ Wild\ Hearts with the name of your game.)

Hey, at least the crash log changed this time! You can probably guess why this didn't work. libSystem.B.dylib is an essential system library which contains contains many, many functions. UnityMavericksWorkarounds only contains getattrlistbulk. And so although the game now has access to getattrlistbulk, it's missing everything else!

I did this using optool:

(There's probably a cleaner way to link this at compile-time, but I couldn't figure out how, and optool worked.) 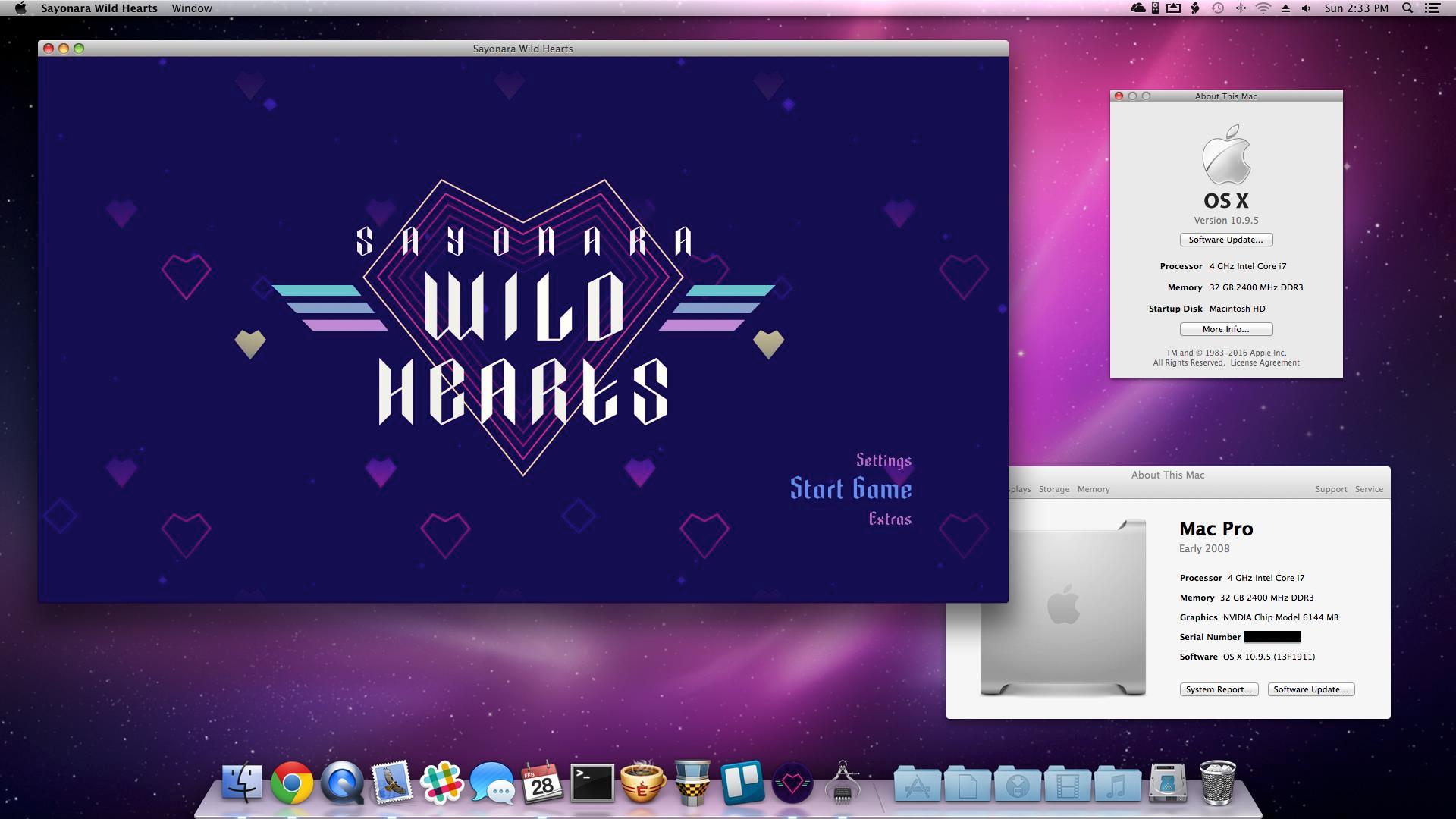 (Follow-up questions no one has asked, but which they theoretically could.)

Q: Is the return value of 0 important?

A: Yes. I originally tried 1, but that caused some games to allocate all available memory and crash once none was left.

Q: Will this make all Unity games work properly in Mavericks?

A: No. As far as I'm aware, it will allow any Unity 2018/2019 game to start up, but no one said anything about working properly! Games are complex, and these ones have clearly never been tested on Mavericks before, so they may have other glitches. Timelie is one example of a game which technically works with this fix, but has very severe graphical problems.

Many other games, however, really do seem to run perfectly.

Q: Is it possible to actually reimplement getattrlistbulk instead of using a stub function?

A: Maybe? The Internet™ says getattrlistbulk is a replacement for getdirentriesattr. So, at one point I tried:

This was written by pattern-matching the example code for getattrlistbulk and getdirentriesattr in the developer documentation. It does work (insofar as games run), but then, so does return 0, so I really have no way to test the code. Under the circumstances, return 0 seems safer.

Not the answer you're looking for? Browse other questions tagged macos crash games .

1
Is there any way to run incompatible apps from future versions of macOS?
2
How to open applications regardless of required version?

0
How can I find a list of games that are playable on my Mac?
4
Why games claimed to be compatible with 3rd Gen iPod won't run on my 3rd Gen iPod 8GB?
0
TextEdit Crashes on New Document (SIGSEGV)
16
How can I temporarily disable hot corners when playing games (or other such full-screen apps) on Mavericks?
5
How can I debug a crashing application on OS X?
1
How To Launch Steam Games from Terminal?
0
How can I play local multiplayer games on Apple TV
0
Unity: How can I run Unity builds created in High Sierra & Verify they run on Mojave without a Mojave computer?