I want to ultimately create an executable file that will run a terminal command:

I want to know what other text and where to add into the Script Editor with the above command so I can create an executable file that runs that command. I would like to do it with out the Terminal window opening. But if it has to open, I would like to add some more code so that is closes.

If there isn't, there should be a Chrome extension that does this.

You can use the do shell script command, however, I've changed the double-quotes to single-quotes in the open command, so as not to have to escape them with a backslash character.

You can save this as an AppleScript application.

Note that if Google Chrome might already be running and you want to be switching to e.g. Guest Profile, then change the -a option of the open command to: -na


On my system it opens Google Chrome with the following dialog box: 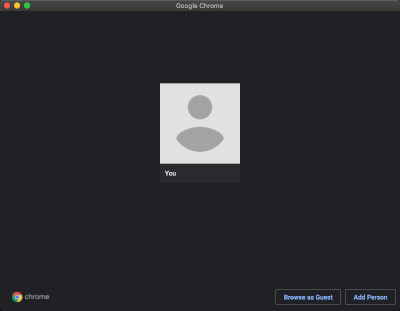 While user3439894 has provided the correct answer to your question, I would like to point out a simpler solution would be to use the Automator to create an application. Here you would not have to wrap the open -a "Google Chrome" --args --profile-directory="Guest Profile" command in do shell script. The steps are given below.

I do not have Chrome installed, so I will use Safari for this example.

Not the answer you're looking for? Browse other questions tagged macos terminal applescript command-line .

29
Create a Terminal command to open file with Chrome
1
How can I create a stand alone APP to run a terminal command
4
How to make a command line executable an application?
1
command not found for shell script
2
Python script executable opened by text editor
2
Open application from terminal and remain linked to the process (like Linux) so when CTRL+C is sent to terminal the application closes too
4
Run script in automator (without terminal)
1
How do I create an apple script that toggles between opening and closing an application?