MacOS - Manually open as read only

I hope this is not a repeat question—searching mostly turned up various versions of people having the opposite problem.

Is there a way to manually open a file as read-only?

The use case would be a file that I generally want write access to, but on a particular occasion want to be very confident I won't accidentally modify. For example, a shared document that I sometimes need to edit but currently only want to view. As a compulsive/instinctive saver, this would be a useful way to protect myself from myself.

You can do this in Finder with a simple keystroke and one click.

Before opening your file do this:

This sets the immutable bit - meaning you can't change the file in any way.

Leave the Get Info window open and, when you are finished, untick the Lock box to unlock the file.

You can create Services (or Quick Actions) to lock and unlock files, and associate a keystroke with them, but I feel is hardly with the effort. If you want to create them, run Automator and create a new Quick Action. This is what you need: 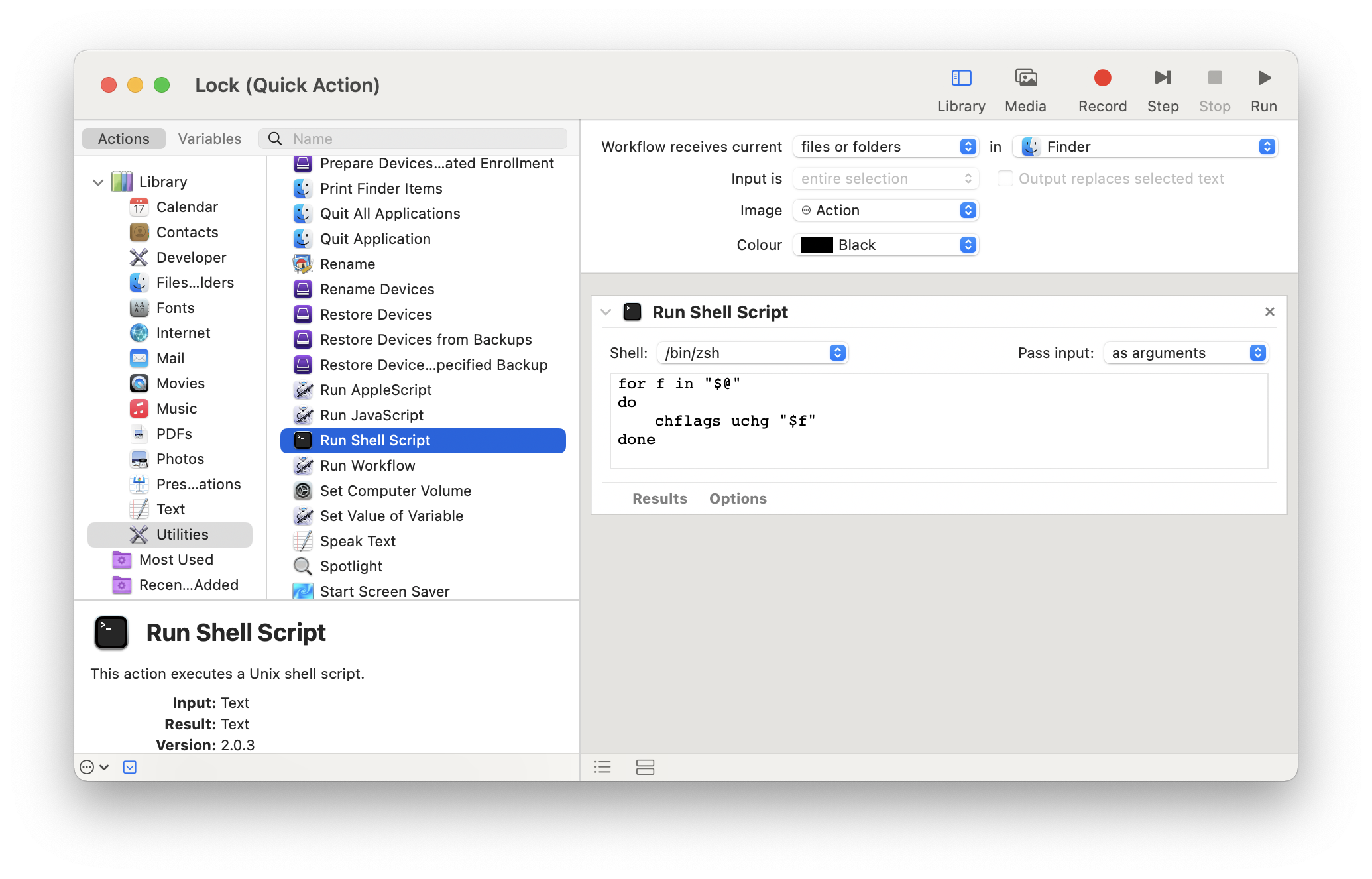 Save it with the name Lock.

Modify by changing the uchg to nouchg and save as Lock Off.

Now these appear as Services and in Finder's Quick Action submenu.

Paste this following AppleScript code into a new Script Editor.app document then save it as an application. I named my version as “Open File As Locked.app”

This AppleScript code works for me using the latest version of macOS Big Sur.

After your new applet is saved, you will need to grant appropriate privileges in System Preferences for both “Open File As Locked.app” and Finder.app as shown in this following image…

Now anytime you have a single file selected in Finder, click on your new app in Finder’s toolbar. That file will be set as locked and then will be opened in the default application for files of that type.

That file will remain locked. To unlock the file, simply make sure it is selected in Finder and once again click on “Open File As Locked.app" in Finder’s toolbar (as demonstrated in this following .gif).

Not the answer you're looking for? Browse other questions tagged macos finder permission .

15
Why can't I open DMG files which reside on a read-only NFS filesystem?
5
No right to open file once copied on the desktop
5
Excel 2011 Opens Spreadsheet As Read-Only
1
El Capitan folder permissions to make admin accounts read-only
2
Is it possible to password protect access to a folder with your macOS password?
3
What should my home folder permissions look like?