is this swap memory use normal?

I got myself a m1 macbook air with 8 gb of ram
Ive been using it for a month now and noticed that my swap usage is unusally high, is that something to worry about?

As you can see from the screenshot swap is around 3 gigs, and it hasnt gone done down yet. 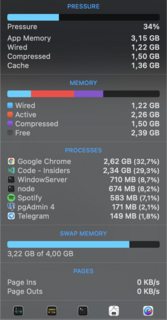 Also, my ram usage in the activity monitor always peaks at 6.6-6.7 gigs, never goes up more than that.

Should I be concerned?

So long as memory pressure looks OK, there's nothing to worry about.

macOS keeps things cached in RAM as long as that RAM is not needed by anything else - that gives it a tendency overall to look like it fills up & never empties.

The same can be said of swap. It fills, the contents may change, but the swap figure displayed is always a "high tide" figure. You never see it go down until you reboot.

It doesn't serve you or the OS well at all if it were to periodically flush unused RAM or swap just to "look tidier". Its purpose is best served by it just hanging onto it all in case it's needed again.

There are two major misconceptions that are often seen in relation to memory management:

Swapping is bad. Swap isn't. Most OSs will flush pages from RAM to swap preemptively during periods of low system load but keep them in RAM at the same time as well. Why? Because swapping is slow, and thus you want stuff be already in swap in case the proverbial feces hit the proverbial air circulation unit. You don't want your system to start swapping out at the same time when it is already under high load anyway.

MacOS in, particular, will try to keep some amount of RAM free, and will also compress some parts of RAM.

2
Understanding active, inactive, free and swap memory allocation
6
Why does OS X use swap memory when memory pressure remains low?
2
Would and SSD or RAM be the better upgrade in this situation?
150
How to investigate high kernel task memory usage?
24
Why is my MacBook Pro already using swap memory?
9
MacOS uses virtual-memory / swap a lot
0
Can i swap memory modules between mac
7
High memory usage on iMac MacOS Catalina