Everything but ONE APP. This app, called Anamnesis, reported "the app is not compatible with this iOS version". I wrote to the app developer (www.fuze.cc) which is not answering. I wrote to each member of the Fuze team and only one answered me (Icaro) who is no more working on Fuze, unfortunately.

I'm quite desperated because I strongly need this app to work: I use Anamnesis to register each patient I see everyday. I have about 1000 records in that Anamnesis database, which is stored locally in the old iPad.

I'm writing an webapp with Zoho Creator, so one day that I will have the database I can slightly control the migration. But actually, I don't know what to do.

This is a screenshot of Anamnesis taken in the old iPad: 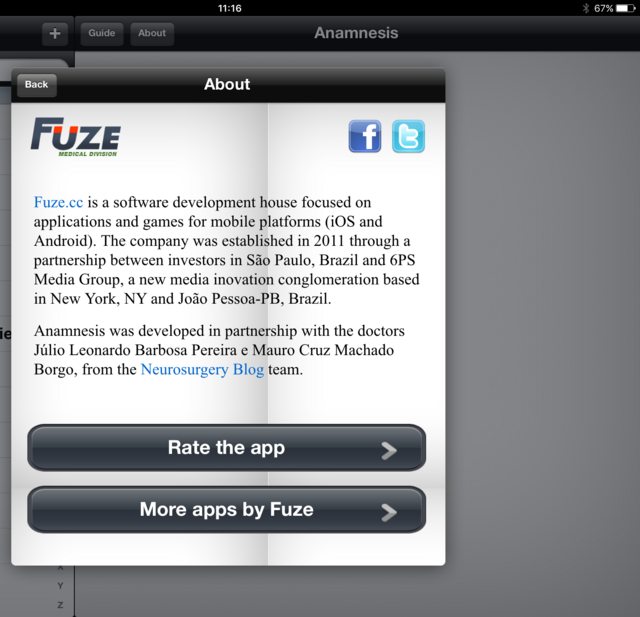 Unfortunately it is completely irresponsible to store patient records without regards for security, backups and vendor support, and without being aware of the fact that the vendor discontinued the product and removed it from the App Store years ago. In many countries you would risk being fined heavily by the authorities.

At this point, you have a few options:

Migrating the data manually could be done by simply going through all data in the app and taking screenshots along the way. Make sure to handle those screenshots in a professional and ethical manner - i.e. ensure they're not synced with Dropbox or Google Photos or something like that - and transfer them to a secure PC, where you can transfer the data into a new patient records system.

Not the answer you're looking for? Browse other questions tagged ios ipad database .

4
How do I transfer app data from my old iPad to my new iPad?
0
Trying to get iOS 4 iPod app on a jail broken iOS 5 iPad without totally downgrading
1
What can we do now that Facebook iPad app crashes on launch after update?
0
Database app, accessible from Mac, iPad and Web
1
Upgrading from iPad 1 to iPad Air - restoring individual app data?
7
Finding old versions of iOS apps (for 5.1.1 on a 1st Generation iPad)
4
How to move photos from an old eMac to an iPad?
0
How to download old versions of apps to old iPad
3
Transfering all photos from old iPad