My problem is that that it overheats very quickly and drop the performance of the CPU to the ground. I installed Intel Power Gadget for investigating and turns out, just after a few minutes of heavier workload (clean install a bit larger maven project) get so hot the system limits the maximum core clock speed to 1GHz. When this happens the mac feels very slow and janky and even the most basic things can take uncomfortably long.

I heard that this series of MacBook Pros with Core i9 has thermal issues but this seems ridiculous. I already bought a Cooler Master A200 laptop cooler and it's helped a bit, but it still doesn't feel right.

AppleInsider tested the 2019 Core i9 2.4GHz MacBook Pro 16" and found that it could maintain 3.19GHz under sustained load. This and many other sustained load benchmarks demonstrate that your issue is not normal.

The easiest thing to do is bring it to Apple so they can fix it. If you want to know more, keep reading.

I think some repairs would actually require Apple Authorized Repair shops to reapply thermal paste, so I guess they are allowed to do it. They are also authorized to clean the Mac's internal components, and will often do that for all repairs requiring opening the computer.

Any repairs done outside Apple Authorized Repair shops could void your warranty if done incorrectly, but there isn't anything inside your Mac designed to tell Apple it's been repaired by someone else. So unless they screw up, I think it won't void your warranty. In my opinion, I'd rather not risk it, specially for replacing parts.

1GHz (and sometimes 800MHz) is the absolute lowest clock speed the CPU in Macs like yours can go. Throttling down to the lowest clock possible under Standard Ambient Temperature and Pressure (SATP) is not normal. Intel/AMD/x86 notebooks often throttle to some degree, but extreme throttling is usually a sign of a deeper issue. The expected behavior on well designed computers (such as the 16" MacBook Pro) is to, at most, stay close to the base clock when under sustained load (CPU-only).

Here are common things you can do to troubleshoot your issue. Remedies potentially fix the issue. Workarounds might improve your situation, but are unlikely to actually fix it. I recommend trying the remedies.

Check if you have the latest updates

It's very important to keep your Mac's Operating System (OS) up-to-date. Updates include bug, performance, reliability and security fixes and improvements. It also includes new features. Apple has previously fixed thermal throttling for some MacBook Pros in a software update.

Thermal throttling is caused by aggregate component temperatures above the computer's thermal budget. This usually means the CPU and GPU because they are the most power-hungry parts, but is not limited to them. High battery temperatures or high VRM temperatures can also make the computer throttle.

The CPU and GPU can withstand temperatures as high as 100ºC, but that's the limit. Macs usually prefer keeping it to lower temperatures such as 85ºC under sustained load. If your Mac's CPU is at around 85ºC or more while throttling after a long time, it's possible the issue is the CPU's own temperatures.

If the CPU temperatures are not that high, check the GPU temperatures, which also present numbers similar to the ones mentioned above.

Workarounds (I do not recommend. They will only alleviate the issue, not fix it):

Macs can operate with the lid closed by using an external monitor and peripherals. The MacBook cooling design inputs air from the sides and outputs to the back. 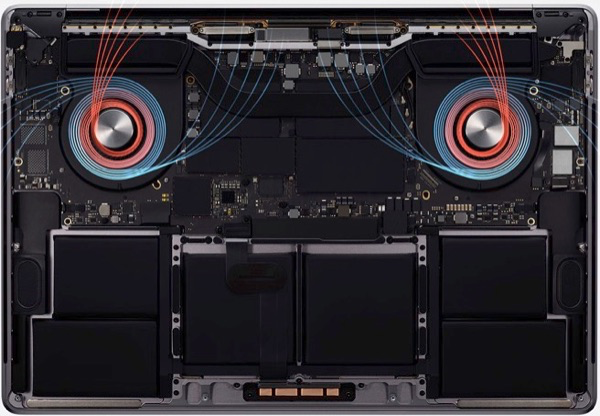 Portable computers use batteries to continue working when not plugged to a power outlet. The battery is a consumable part of the computer, and its performance degrades as it ages. Apple has developed specific features to help with that.

The ability of a battery to supply the required voltage for the processor and other components is affected by its age.

All rechargeable batteries are consumable components that become less effective as they chemically age.

As lithium-ion batteries chemically age, [their] ability to deliver maximum instantaneous performance, or 'peak power', may decrease. [...] One attribute that affects this instantaneous power delivery is the battery’s impedance. A battery with high impedance may be unable to provide sufficient power to the system that needs it. A battery's impedance can increase if a battery has a higher chemical age. [...] These are characteristics of battery chemistry that are common to all lithium-ion batteries in the industry.

When power is pulled from a battery with a higher level of impedance, the battery’s voltage will drop to a greater degree. [...] The power management system determines the capability of the battery to supply this power, and manages the loads in order to maintain operations.

As the battery's ability to supply a consistent voltage is diminished, the Voltage Regulator Module (VRM) will have to work a lot harder to convert that to a usable, constant voltage for your Mac's circuitry. This in turn can make the VRM overheat, which could cause your Mac to throttle other components to the levels your Mac is experiencing in order to dissipate the heat.

Apple, iFixit and many others recommend changing the battery when its health drops below 80%, or when its cycle count goes over 1000. Your Mac will automatically tell you when your battery reaches these thresholds, but you can use CoconutBattery to manually check the battery health of your Mac. If it's close to 80% or lower and you have already checked the other things mentioned here, this could likely be the cause of your computer's extreme throttling.

80% is not a magic number. Battery aging is a complex chemical process also affected by temperature, and your battery may naturally have its performance diminished before or after this threshold. Apple is very good at managing (and even masking) battery aging by taking steps to remedy and keep the device working reliably for a very long time. I've had Macs with over 6 years old batteries still working fine.

This means your Mac's battery is probably fine and could still be used for many years. But the Intel Core i9 and the discrete AMD GPU are very power-hungry devices that draw a lot of instant power from the battery, potentially dropping the voltage, regulated by the VRM. The i9 alone draws 45W at 2.4GHz. So if your Mac's VRM is overheating due to the battery aging, perhaps it would be in your best interest to replace the battery in order to have better performance.

Using the computer plugged in

It's possible that the battery will naturally heat up as it charges. This could lead to an additional degree of throttling.

When the discrete GPU is doing heavy processing, it's expected that the CPU will exhibit more throttling than if you were only using the CPU. Macs automatically switch between discrete and integrated graphics depending on what tasks they are running and whether your Mac is running on battery or plugged in to achieve a balance between performance and battery life.

You can check this opening the Energy tab on Activity Monitor. 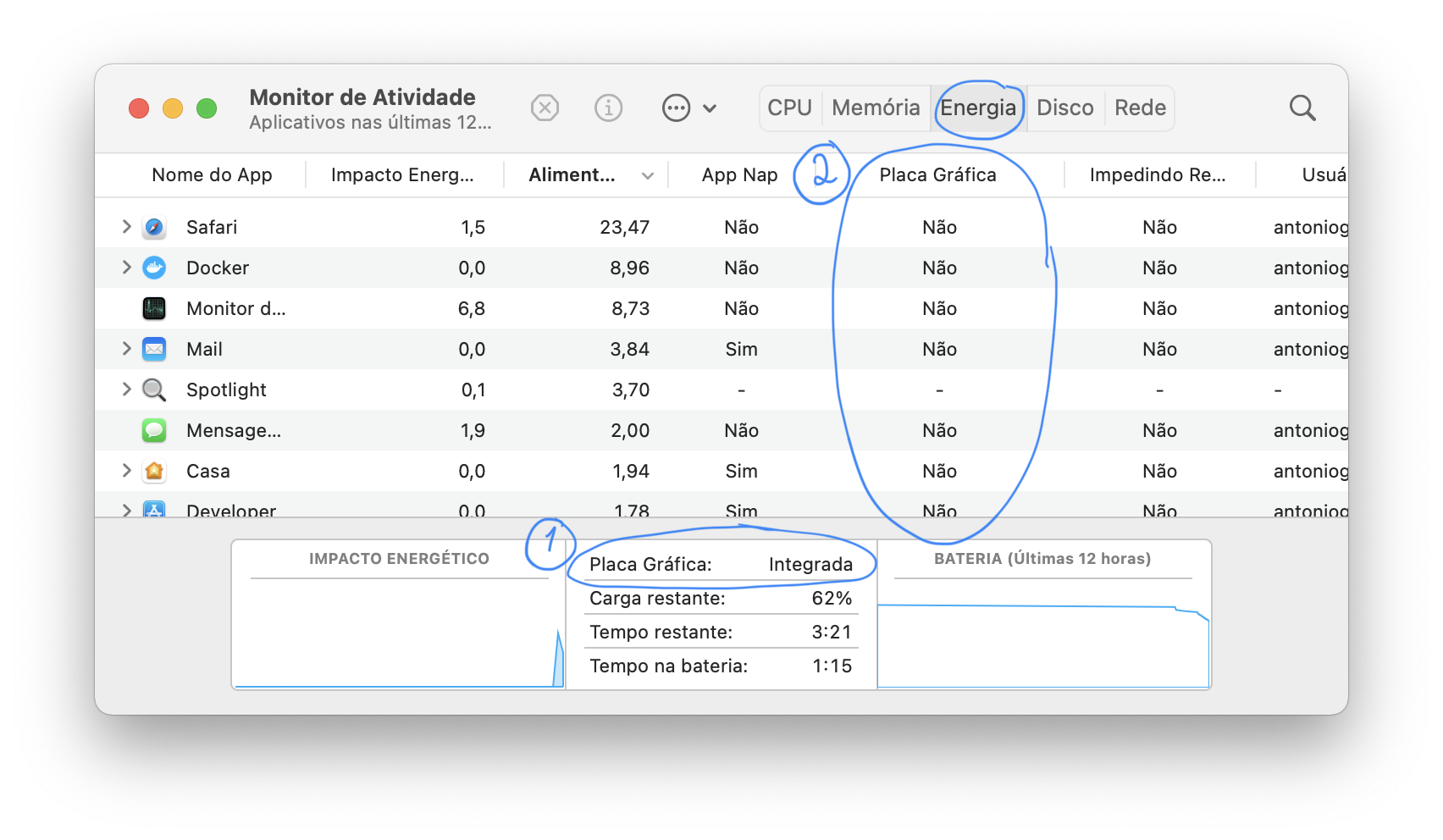 There's also the free utility gfxGardStatus that constantly shows an icon with the current GPU on the menu bar and can display notifications when the GPUs are switched, as well as which apps are using the discrete GPU.

There's a simple tool that comes with Macs and is able to catch a few issues: the Apple Diagnostics tool (there's more than one link for it). Reboot your Mac holding the D key or or follow the instructions provided on the links. Running the tool will give you a simple result that can be used to find obvious problems with your Mac and (optionally) request support. 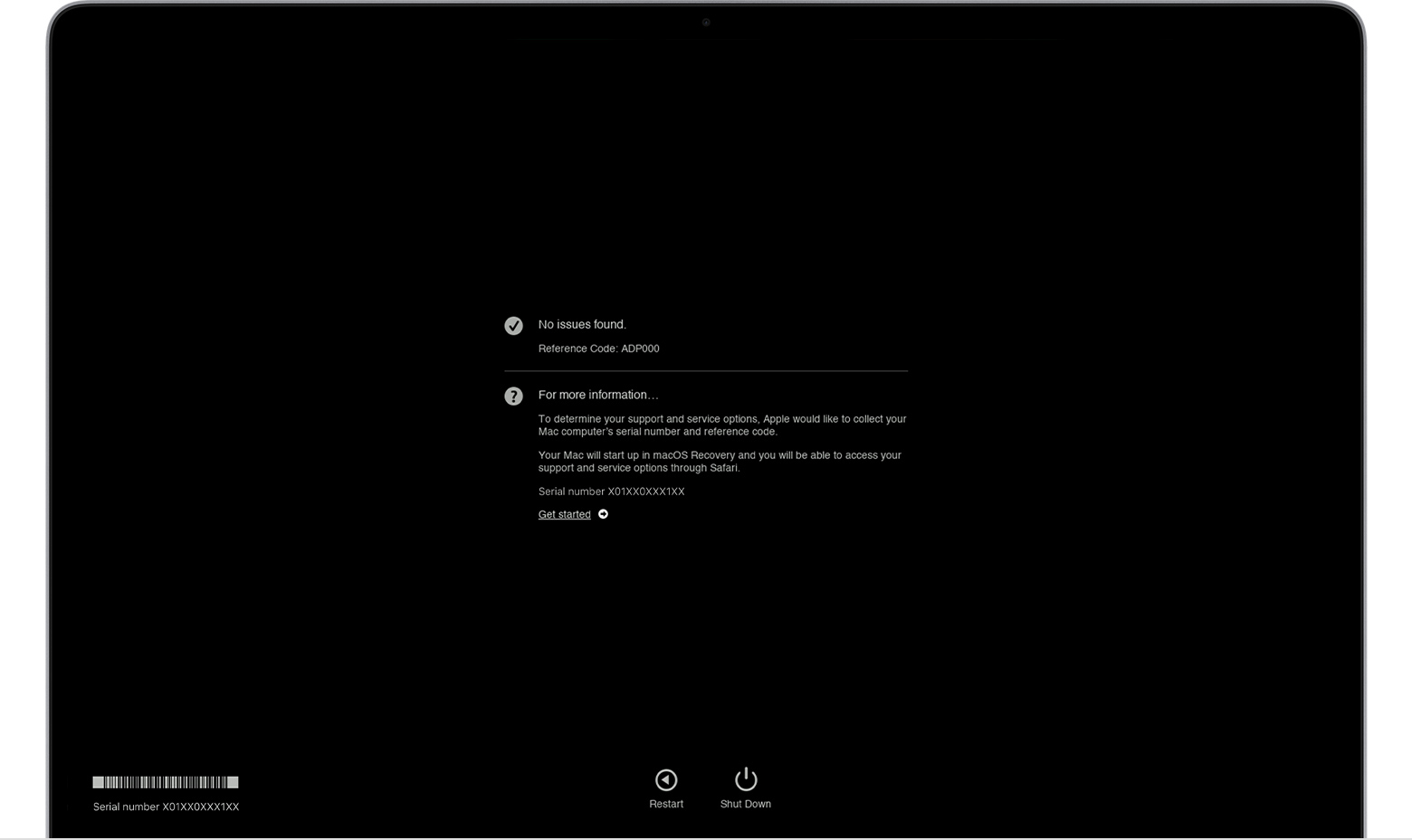 This tool is not a substitute for bringing your Mac to an Apple Authorized Service Provider (AASP), where Apple runs a complete suite of tests that is able to catch more issues than this diagnostics tool.

If everything failed and you think you have a software issue you are not willing to troubleshoot, you can try to do a clean macOS install. Before trying that, backup any data you want to save. This operation will completely erase everything that's on your Mac's internal storage and you will not be able to restore any data lost after formatting if you don't have a backup.

Not the answer you're looking for? Browse other questions tagged macbook-pro hardware performance .