How to auto-change all new .webloc files' icons to web page favicon?

I'd love to have all website URL files on the desktop take the favicon of the corresponding web page, rather than the Safari icon.

This would mimic the function of adding a page to the home screen of iOS.

How can I set something up, perhaps in Automator, so that, when I drag a new URL from Chrome to the desktop, the page's favicon is fetched and applied as the icon image?

Disclaimer: This answer is being presented strictly as a proof of concept in that it has had limited testing, shell script contains limited error handling, and requires the use of a third-party shell script to apply the favicon to the .webloc file(s).

That said, you would need to assign a Folder Action to the destination folder to which the URL dragged from the browser, or file, is dragged and dropped.

The Folder Action would then trigger e.g. a shell script that would extract the domain name from the URL within the .webloc file to then download an e.g. .png file of the website's favicon and then set it as the icon of the .webloc file.

Retrieving the favicon is done using curl and a Google URL designed for that.

You can use Automator to create a Folder Action workflow using a Run Shell Script action, with settings as shown in the image further below. 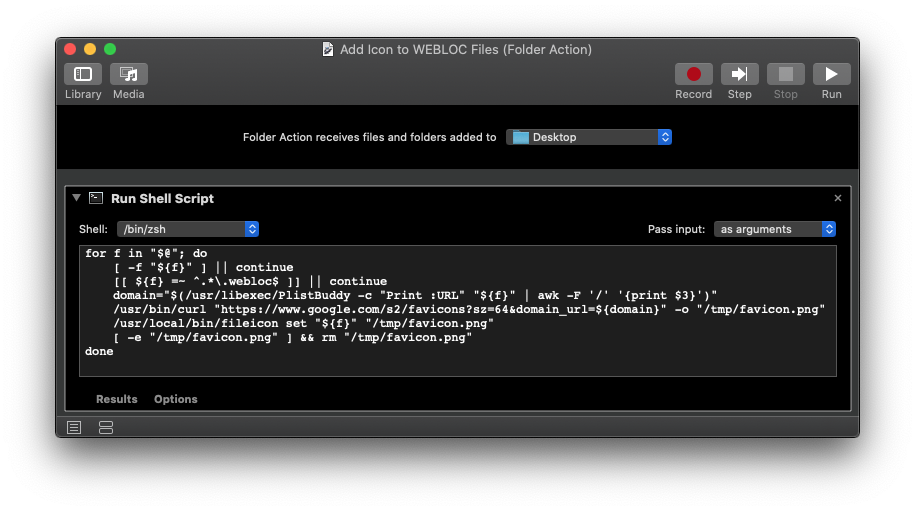 What the shell script code in the Run Shell Script action is doing for each item dropped in the target folder that has the Folder Action set:

More about the domain variable:

Using a .webloc file created for this question, its contents is, e.g.:

Which is piped to awk and returns e.g. apple.stackexchange.com, and through command substitution $(command), which allows the output of a command to replace the command itself, sets it as the value of the domain variable to then be used in the URL of the subsequent curl command.


More about the URL used in the curl command:

Google provides a method by which to retrieve a .png file of a website's favicon and as coded, it retrieves a 64 pixel size of the favicon as set in sz=64 segment of the Google URL. This can be changed, however anything higher the 64 is probably going to be too blurred and would not look as nice. Even 64 in some cases may be too blurred. If this becomes an issue set it to 32, although by the nature of typical favicon files, which are 16x16 pixels, there will always be issues when increasing its size.

If you do not like the favicon that was applied to the .webloc file, or just want to remove it, you can remove it from its Get Info window by selecting the target file in Finder and press ⌘I, and then select the icon and press the delete key.

You can also, in Terminal, use fileicon to remove it, e.g.:


Working with the Folder Action afterwards:

The UI of the Folder Action Setup utility should be self-explanatory and easy to use.

Not the answer you're looking for? Browse other questions tagged safari automator icon desktop web-browser .

2
Extension for Safari to enable Google Translation WITHOUT adding a button?
3
can .webloc file icon show a useful web page preview?
11
(How) Can a web site determine if Safari Private Browsing is turned on?
1
How Twitter.com set Apple Touch Icon?
5
reader mode on iOS Chrome?
1
Some websites do not load in all my browsers