I work in bed a lot, and I'm undecided between the MacBook M1 Air vs. Pro. I have heard that fans in the bed will cause my MacBook to collect more internal dust. I’m not even sure how to determine if my bed has a lot of dust compared to other offices.

How can I research if having a fan/blower is better or worse in a generic environment?

After surgery I needed some recovery time at home, so I had to use a rolling table that cantilevered over my bed for a few weeks. Amazon has a top 100 rolling & over-bed tables list to choose from.

One model (#92) actually looks like it can hold an iMac or perhaps even an external monitor and a laptop: 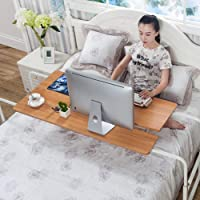 One added benefit is a real table capable of holding meals, books, and other essentials. Hot liquids are best consumed from a travel mug with an auto-closing top. Trust me.

I like IconDaemons approach, but there are many reasons you would not want to do that. Therefore I am going to give an alternative answer.

In short: I would recommend the MBA over the MBP for several reasons:

The only real technical difference between the two machines is active cooling with a fan on the MBP compared to the MBA. This difference implies the major differences mentioned above, which are all positive, except for the performance difference. Yet, if you compare the two MacBooks, this difference is very small and only occurs after long and heavy workloads:

Only after ~10 minutes under full load the MBA experiences thermal throttling. In my opinion, most users even considering such a laptop do not need the higher performance after long workloads.

Considering the battery on the MBA already lasts more than a work-day (and it actually lasts this long, not only in tests), I'd argue you will rarely need the longer battery life on the MBP.

Now lets get to your questions:

Is it true that the Air without fans would be more bed-friendly than the Pro with fans?

In my opinion: Yes, due to the multiple reasons mentioned above.

If it is true, would disabling the Pro fans while in bed make it essentially function and relatively painlessly throttle like the Air?

Looking past the technical difficulties and the fact that that's not recommended, the answer would most likely be yes.

Note: Someone using a laptop in bed is most likely not going to edit videos in FPC X, bounce huge Audio composition in Logic Pro X, test large iOS projects/Apps in Xcode,... and therefore not really gain anything from the MBPs higher performance under sustained load.

I know that the MBP also has slightly better speakers, a slightly brighter display (what do you care in bed?), better mics, but in the end, I don't think these small things are that important.

Here is a list of videos/articles comparing the two machines:

I have worked as a repair technician for several years and the variance in people’s air quality and cleanliness is so much more a factor than whether the Mac has blowers or fans.

In general, there’s clear signs of overheating whether the issue is airflow, ambient temperature or lack of convection in the case - so get the Mac you want and need. Get fanless if you prefer quiet and thin or with blowers if you think you’ll do CPU intensive tasks for 15+ minutes and run into a situation where active cooling will delay thermal throttling.

Where you use the machine will be unlikely to make or break this buying decision in my experience and you’ll need to manage dust for reasons of screen quality and keyboard function well before you get clogged internals in most cases. You’ll know you need to have a technician service a computer due to dust and that’s not generally a large expense if you must use a computer in an environment that requires cleaning. Your lungs are more a concern to me than the hardware.

The only time I would recommend fanless is if there is tobacco smoke and tar in the air - that dramatically accelerates accumulation of fine particulates and can require expensive cleaning in less than a decade of use.

I've used an M1 MacBook Air as my sole software development machine for the last month and a half, and I've never felt it get hot, and rarely felt it get warm. Tests by reviewers have shown that it takes a long time to throttle, and when it does get hot enough to throttle, it only loses a small amount of performance, (roughly 20% by my memory).

Now if you are doing hard core video editing, I'd get the M1 MacBook Pro since long exports could trigger throttling within 3-4 minutes. But for the vast majority of users I can heartily recommend the Air.

The only other reason I would not recommend using the Air in bed is that, it's usually too cold! I hate putting it on my bare legs when I'm sitting in bed as it takes a while to warm up. But you can always wear pajamas or put a blanket on your lap if that bothers you;)

Dust is the least of your concerns. Regardless of laptop make or model, operating a laptop on a bed is generally a bad idea. Bed sheets are very non-conductive and isolate heat very well. I've seen cases of laptops including MacBooks overheat due to operation on beds. This can lead to severe damage to your laptop from burnt components which leads to hardware failure.

If you must work in your bed, use a flat surface under the laptop (a board or ideally a folding table). It will dissipate heat a lot faster than a bed sheet.

When your laptop doesn't have to run hot, it will increase the longevity of the device regardless of model.

I use my macbook air m1 in bed all the time. In my opinion it is the only premium laptop that can be used in bed safely. It never gets hot at all, because there are no fans and you don't block their airvents. This would be a problem if your laptop had fans, because when you block the airvents with bed sheets, the heat will recirculate back into your laptop and it will get hotter and hotter.

2
Is it normal to hear the MacBook fans all the time even if they run at 2000rpm?
0
MacBook Pro runs fans at full speed constantly
0
kernal_task bringing MacBook Pro to a halt - fan problem?
1
Macbook Air M1 Display Issue