How to determine if my 2015 MacBook Pro can still handle current workloads?

I work in a company since 2015 and when I joined I was handed over a new MacBook which was the latest at that time i.e 2015 Mid model i7 16GB Ram. This company does not have a rotation policy for the hardware allocated to employees at all. So they will end up repairing and replacing parts till its no longer viable.

My profession is mobile development so I would require the latest versions of macOS and Xcode all the time. Of late it has become difficult to work on the said MacBook and its sluggish all the time. I had put in a request to replace the Mac with the system team and it was simply shot down saying that the current config is good enough. I replied politely indicating the Geekbench scores for the 2015 model and the latest Intel MacBook. But again I was shot down just saying that 16GB Ram and i7 is more than enough. I understand that the current MacBook configs are not bad, but it is indeed slower than the latest ones and also 5 years old.

If not for geek bench scores how can I put a case to compare older Mac with newer ones ?

EDIT: My current macbook has been repaired a lot already and it still has issues w.r.t battery, heating issues etc ... Display, Logic Board & Battery were already replaced last year. All those repairs are pretty expensive, and yet for some reason this is the route which they might want to take still.

I would look at three things

In the end, you’re appealing to your manager for funding and reasonableness of the “requirements” and not IT for a “blessing” of the age or benchmarks.

Consider that people are expensive to recruit and train and hardware is cheap. But it’s easy to measure hardware expenses, so that tends to get scrutinized over process (erase and install) or training.

Do some quick math on “Is it worth it?” and good luck! 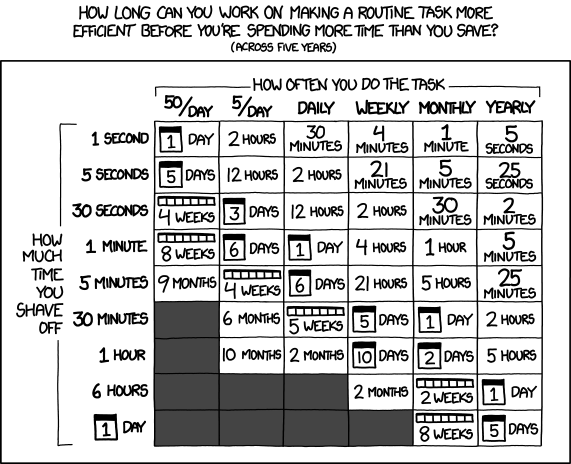 In your case we would send you an identical Mac to your 2017 one that is erased and have you run your chosen tests. Most of our managed Macs need an erase every 2 years and developers tend to need erases much more often since they alter the system so heavily. They understandably complain bitterly when asked to clean (just like system admin do), which is why we send them a second kit to run tests so they aren’t forced to migrate but can do a good test on a clean system. It’s rarely the hardware slowing them down in my experience, but when it is it’s nice to have good data on a clean build so that the budget person doesn’t think the “spec” was made up or not backed by data and testing.

Nobody except you cares for benchmarks. That was the wrong tree to bark up to.

What you need is specific use cases. "I need a new computer because task X must be done on the latest MacOS version, which is no supported on my current machine."

That it's faster is not an argument. That you can't do your job is.

So find which things actually REQUIRE a more recent machine. Ignore your own comfort or speed. Look for things that you actually can't do AT ALL without a hardware upgrade.

If you can't find any, then it's time to ask yourself if you really NEED a new machine, or just WANT one. Looking at the question from that perspective will help you find an answer that also convinces IT.

Depending on the corporate environment the case for new hardware may be difficult to make. Things which might work:

With a company policy like that I doubt you'll gain any traction at all until your Mac can no longer run the latest macOS & therefore the latest Xcode.
If they're not interested in Geekbench scores I doubt you will find anything else along similar lines to compel them. "It works, so it is fine."

The only hope I could see would be if you could make a case for needing Apple Silicon.

Are you sure that you MBP is not simply throttling its cpu because there's fluff and dust accumulated inside the cooling system? If it was my own mac book I would service it(remove dust, replace thermal interface, check fans).

If it is a macbook of the company I'd argue that as an asset of the company, computer is subject to https://en.wikipedia.org/wiki/Depreciation (in some jurisdictions assets like notebooks are not expected to worth anything after several years) because things become worn out with time - suppose if it was a uniform given by the company for example - obviously it requires replacement.

Actually some sources state that the time of life of the notebook is about 5 years. In my country it has depreciation time of 3 years for example. So it basically should not cost much if you accidently spill tea on it or ask to buy it out - but this of course depends on your jurisdiction.

Also using a notebook near its end of life is risk for the company because something may go wrong. What if your computer fails just before important presale to the customer?

A mid-2015 MacBook Pro still runs all the latest software. There are faster machines, but it is still plenty fast. You would have a case if you need to develop MacOS software that runs on a MacBook with Silicon chip.

Another solution is to look at renting cloud-based resources for the purpose of compiling, and using your existing device as a simple front end/terminal.

Price up the cost of AWS "mac1.metal" instances and you'll have pure dollar values to support your claim to accountancy types.

Companies and clients usually grant requests based on need, not want.

Even if you get your message across regarding the Geekbench score, I don't see any reason why the latest software wouldn't run on a 2015 MacBook. You need to build a case on why your 2015 model stops you from doing your job.

I'm also a mobile developer. As an anecdote, I once requested funds for a PC upgrade since compile times are long and the IDE was laggy. My client instead extended the deadline. The sluggishness did not stop me from doing my job, but they understood that development will take longer.

As a counter-anecdote, with the same client on a different project, I could not run the newest mobile OS version since my phone was not new enough. The new OS had breaking changes which I need to develop around. I told them this and, in mere hours, I had a top-end flagship phone.

Vagueness on details due to NDA. Anecdotes happened less than a year ago.

I'm a mobile developer as well, and have fought (and both lost and won) this battle several times before. I've always focused the argument on quantifying the financial benefit to the company by pointing out how much a slower Mac costs them, specifically how slow compile times reduce productive development time.

For this I estimate how many minutes a day and hours per month I'm waiting for compiles to complete, and present it as lost development time. Now, the counter-argument is that you can spend that compiling time doing other productive things such as replying to emails, documentation, code review & checkin, etc. But the counter-counter-argument is a faster Mac makes you faster at the rest of your work as well, but it's just hard to quantify. As a former manager, I'd also point out that recruitment is a little bit easier and turnover a bit lower if the company is good about giving developers the best computers and tools, but again a tough benefit to measure.

The cost of a brand new top of line MacBook Pro (say $3,200) is less than $100 a month in depreciation and interest (typically Macs retain at least 50% of their value over two years, so that's at most $800 a year in depreciation). My cost to the company is roughly $100 per hour (take your pay, add 7.5% for payroll taxes, and costs of benefits like medical, etc, then divide by total hours a month (not including paid vacation days). So I only need to save 1 hour of compile time to justify the purchase of a brand new MacBook Pro every couple years.

Also, you should consider whether this is a company you want to stay with. I always advise young developers to interview for other jobs every year or two, because as you gain skills rapidly most employers have policies that limit how much they will increase your compensation to match your burgeoning market value. And you might find another job that's not just more lucrative, but at a place that has a better attitude about equipping their developers with modern tools, and more enjoyable and challenging work.

Finally, you might also wait and retry when Apple releases high end Apple Silicon MacBooks. I'm doing my development on a 16 Gb M1 MacBook Air and it's extremely fast, building my project faster than any Intel MacBook, and faster than almost every high end iMac and some iMac & Mac Pros. But it is limited to only a single external monitor and 16 Gb of RAM. When high end Apple Silicon MacBook Pros ship later this year, it's almost certain they will support more RAM, multiple external monitors, and be even faster yet. You should look at requesting one of those, I will be buying one, and selling my MacBook Air after less than a year, because lots of RAM and two big monitors is important to productivity too.

Why do you need a better computer, from the company financial perspective?

The only acceptable reason is that compiling or some other task is taking an unacceptably long time, so the company is losing money providing you with a less than modern computer. How many minutes a day would you gain if compilation/debugging performed by a more modern computer? That's the business case your manager is interested in. IT/Helpdesk does not care about that.

On the other hand, I'd say that the investment on your computer has been amortized after 5 years!

If you are thinking of selling then maybe use a site like Mac Recycle. In my experience, they tend to be much fairer than Apple or other larger companies.

Not the answer you're looking for? Browse other questions tagged macos macbook-pro performance .