I got a Macbook Pro 2019 with Intel Core i9 Processors and it seems to heat up and get the fans spinning even with very low cpu usage.

For Example, today when I was on a video call, Both my fans were spinning quite loud and my CPU Temperature was at 57deg Celcius. When I looked at Activity Monitor, my CPU was 97.44% idle.

Is this a problem with the computer or is this normal?

CPU Temperature was at 57deg Celcius

This is well within normal temperature range.

You can try resetting your nvram if you think your fans are spinning up out of error. Otherwise I'd request you install something that monitors fan speed eg. smcfancontrol and update your post with the fan RPM at idle.

When using something like video conferencing software, the likelihood is that your GPU was called on to be more active, rather than the CPU.

I'm not actually certain whether the 2D rendering needed for a video call would swap to the discrete GPU on a dual-GPU machine or whether it would remain on the onboard Intel.

In either case, lifting the computing requirements of either card would produce additional heat, causing the fans to ramp slightly. That your CPU temperature only went to 57℃ would tell me it was doing its job just fine.

I don't know of any simple way to see GPU activity on a Mac, other than to use something like iStat Menus, which can display this in a menu bar drop down… 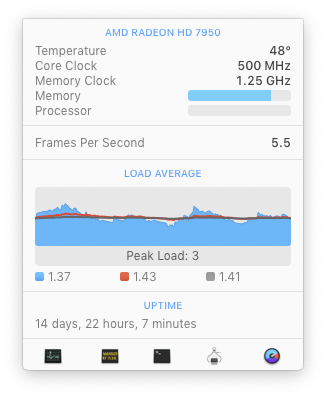 This shows my card is almost asleep, it has so little work to do right now with just a few web pages open ;)

However, I would see no cause for concern if your fans ramp during a video call, so long as that CPU temperature shows it's keeping pace very well. CPU temperatures are OK to about 100℃ so I wouldn't worry unless you see such temperatures whilst only on a call & not doing something very intensive like compiling source code for an application, or running video compression/transcoding, which will light the entire machine up.

Not the answer you're looking for? Browse other questions tagged macbook-pro cpu temperature .