I don't know if anyone is going to be interested in this (or if it the correct place to post it!). I spent a couple of hours trying to write a Script that would solve the 'Safe Cracker' puzzle from the newspaper. My code worked but as you will see, it is very clunky and not at all well written (plus some of my maths is suspect!). I'm not really looking for critique on the code because it was only a test to see if I could do it, but I wound be really interested to see if someone has done a better job! 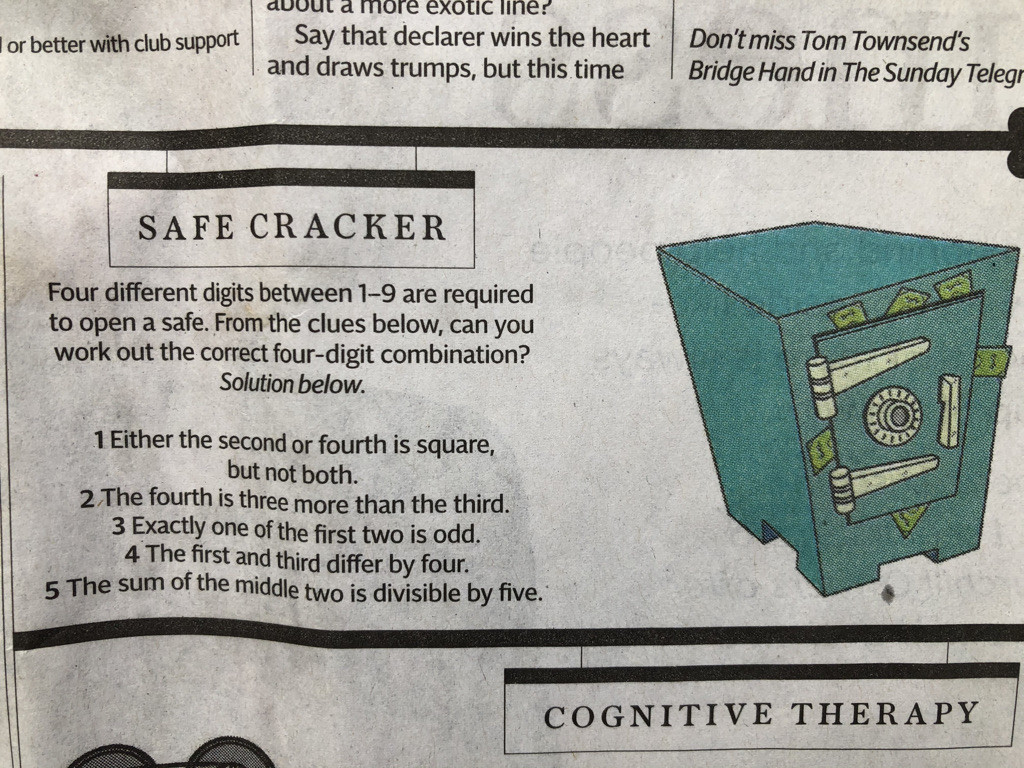 Ignoring my own comment about this being borderline offtopc, here is a (rather brute-force) Swift version looping over all possible combinations once.

Or you start with the list of all combinations and then apply a filter to determine the valid one (without error checking in this case as we already know there will be exactly one solution).

PS: I didn't add a check for digit difference because I was too lazy :-) (but from looking at the rules, a combination where digits are the same doesn't match anyway)

Doing one loop and exiting early, with improvements to condition checking. AppleScript is definitely not the language one would commonly choose for this sort of problem!

Replacing display dialog with return in your solution and using time osascript file shows 12.23 seconds for the solution in the question and 1.25 seconds for my solution. More optimisations in the iteration are possible.

I feel that this is one of the examples where writing code will take much longer than solving it on the paper :-). I think that this kind of solution is expected for solving puzzles in newspapers.

fourth is three more than third

either second or fourth is square but not both

sum of middel two (second and third) is divisible by 5

possible squares are 1, 4, 9. Go through 6 pairs and if fourth number is square find if there is a number which makes sum divisible by 5; if fourth not square second number must be on of squares and find whether one of them delivers divisibility by 5.

This leaves one triplet which meets the conditions (1, 4, 7)

exactly on of the first two is odd

the first and third differ by four

As third number is 4 and 0 is not allowed then it must be 8. As second number is odd, then 8 satisfies the condition.

Here's a method written in Python which is inefficient but simple to understand because there are no nested loops - it tries random numbers between 1111 and 9999 until it finds the correct answer: