Where is Finder looking up the “localized” version of certain directory names?

I have two directories that have different names in Finder vs Terminal / "ls".

In Finder, the directory is called "Docker". If you drag-and-drop it into the Terminal, as I have just been doing in the screenshot below, the name becomes "com.docker.docker". It is still highlighted. 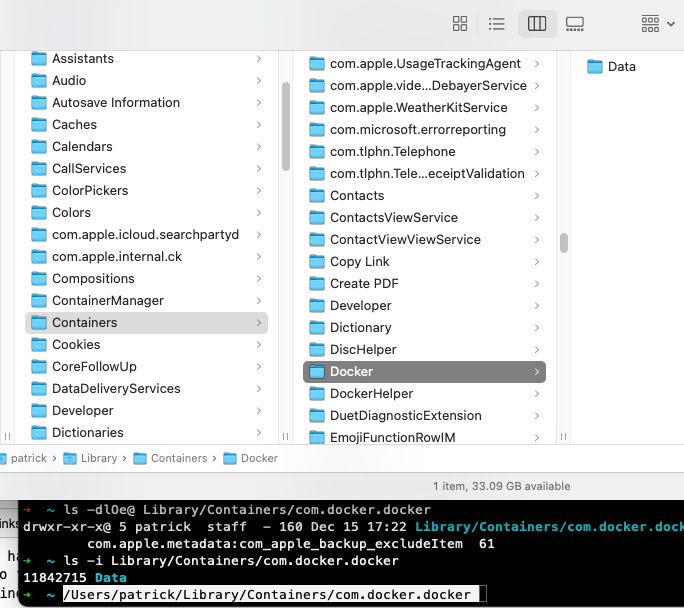 So in Terminal / "ls", the "Docker" directory is called "com.docker.docker":

Finder shows the Terminal / "ls" name in the "get Info" dialog as well:

One side-effect of this "localization" that can be seen in the above screenshot as well, is that now it is possible to have more than one directory with the same name side-by-side inside the same parent directory.

By using an Apple specific API, you can also get at the name that is shown in Finder:

However, what I wonder, is where that information, e.g. the name "Docker" for the directory normally called "com.docker.docker", is actually stored on disk? And how can such a directory be created?

Apparently, macOS has a feature called "Directory Name Localization". An there are two kinds of it. One is the names of the "standard" folders in users home directories, e.g. "Pictures", "Movies", "Documents" etc. Those will most likely somehow be stored in a system database or config value. I do not know it but am not keen to know either. What I would like to know, though, is in what mechanisms might be at play in my particular case here. This is a standard Docker installation on macOS 11.1 . And apparently the second kind of directory name localization is in use here. With this, it seems, arbitrary directory names in the system can be "localized" as well. However, in this case, there is no "*.localized" directory inside the directory with the "localized" name ("com.docker.docker" / a.k.a. "Docker"), as described here.

My original question has been closed as a duplicate of this one. I was not fast enough to adapt it form "why" to "how", as I was quickly able to answer the "why" part myself. The "how" part seems to be more difficult though. And I would be really glad if anybody could answer it to me.

1
File has different name in terminal and Finder
0
Why does finder in some cases show a different directory name than “ls”?

79
How to view Root directory and subdirectories in Finder?
2
How can I reproduce the Finder sort order without asking Finder to sort for me?
2
Two Version of an Application
1
Terminal directory delete issue
3
how can I search for folders ending in certain characters in Finder?
1
Path of an application (here Python) is not accessible from the Finder
2
How can I trigger the creation of a .DS_Store file in a directory?