I have a stereo condenser mic that I've had for a long time and I quite like it - here's the specific model (Sony Electret Stereo Condenser mic, model ECM-MS907). I'd like to be able to use it for recording with my MacBook Pro (15-inch 2019 model), which has four USB-C ports and one 3.5mm combined headphone-and-mic socket.

As noted all over the internet, one does not simply plug the 3.5mm mic plug into the 3.5mm socket and achieve microphone happiness. The plug is TRS and the socket is TRRS, and if the MBP isn't happy with what it's sensing, it doesn't offer the mic as an input device.

[Wishfully] thinking there was a universal standard for these things, I purchased a mic/headphone splitter (in case that link goes away - the description is "StarTech.com Headset Adapter, Microphone and Headphone Splitter - 3.5mm Male Aux to 3.5mm Female Audio & Mic Combo Jack Y Cable for Laptop / PC (MUYHSMFF)") and plugged my mic into the headphone side of the y-adapter. The result is BAD. The mic audio is faintly detectable in the background, but mostly what I hear is the extremely loud flopping around of some bad connection (ground-fault?) that's either destroying my equipment or acting out a reasonable facsimile thereof. Waveform: 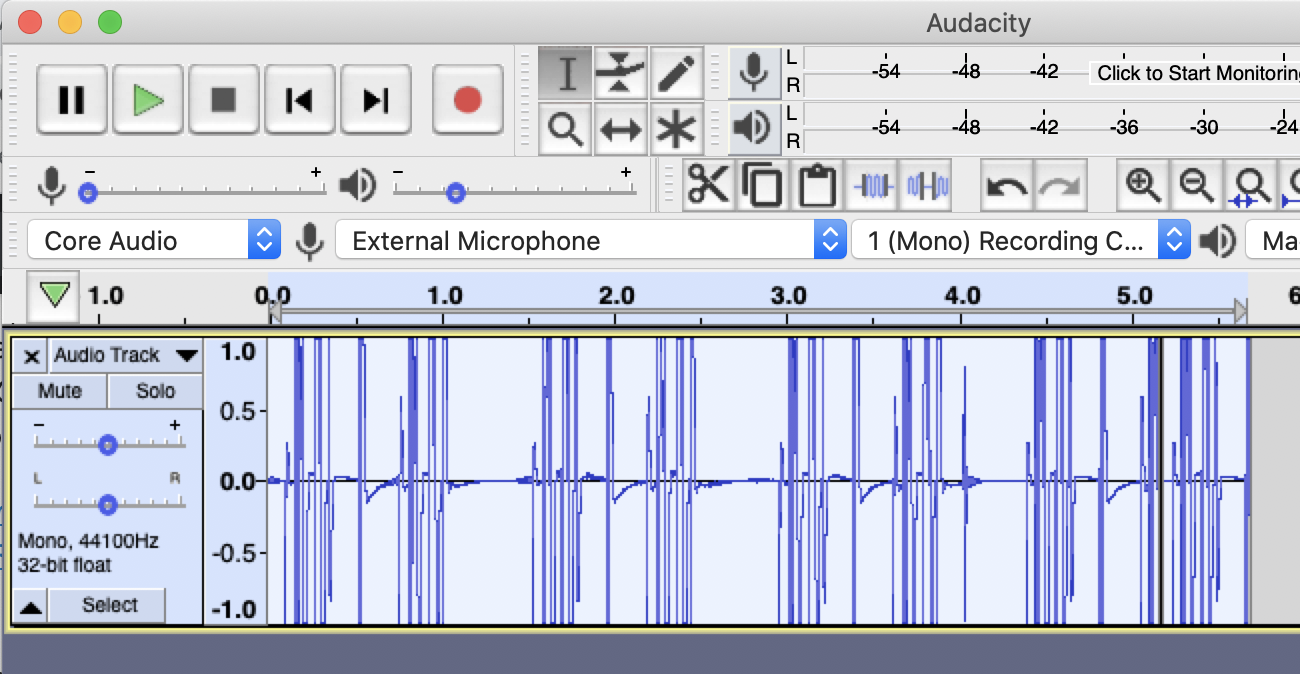 I think the issue I'm having is that this is a stereo mic, with a TRS connection of (I think) Left-Right-Ground, but most mics are mono, with a TS connection of Audio-Ground. I have no hypothesis about why this leads to the particular badness I'm seeing/hearing, though.

So the question is: is there some adapter or configuration that will allow me to use this analog stereo input source?

A good starting place: does anyone know the actual capabilities of the audio socket on this model MBP? The specs on Apple's website simply say:

BTW, if I figure out how to get it working for my MBP audio port, I think chances are good that it'll also work for my iPhone, using the lightning-to-3.5mm adapter.

Some of the comments suggest that MBPs can't do stereo input; I don't think that's categorically the case, as this Apple page says, for example, "Audio in: You can use this port to connect stereo equipment to your Mac with a stereo miniplug-to-RCA cable adapter." It's very unclear to me what capabilities my model of MPB actually has, though.