Wake On Lan behavior with Mac Mini - how to put asleep and confirm wake success?

Experimenting with Wake On Lan, I tested with a small Fujitsu Esprimo mini computer and a Mac Mini. In a Windows desktop app "WakeMeOnLan" on another unrelated computer, I can see "green" dots for awake clients, and "red" dots for sleeping clients. I can put the Esprimo to sleep, so the dots turn red, but not the Mac Mini. How can I test if my Wake On Lan works?

With the mac I have tested hibernate modes 0,3,25. Energy saving settings are those: 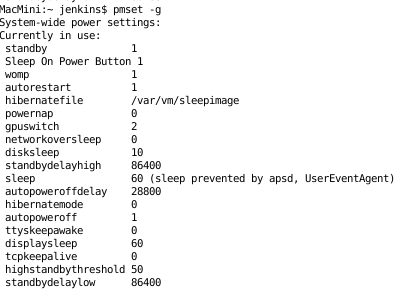 How can I be sure that the Mac is sleeping actually? (LED, SSH connection,...) I need a way to proof that my Wake On Lan actually works for the Mac. It might just be a typical Mac issue, but I have no clue about Apple stuff.

To determine if a computer is sleeping:

Things like music playback or open SSH connections are good indicators of wakefulness but not of sleep, partially due to #2 above.

The pulsing computer LED is a prima facie indicator of sleep.

Note: if you have certain other Apple devices on your network (certain Apple TV and iPad models, and maybe other Macs and Airport devices), the indicator in your WoL app is likely green because you have “Wake for Network Access” enabled.

These devices monitor the network for connection attempts to your sleeping Mac’s local IP or MAC address - if they see that network traffic, they will send a WoL packet and wake your computer (it’s sort of a proxy WoL system). In this case, your Windows WoL app (or another network device) could actually be what is unintentionally keeping your computer awake.

Not the answer you're looking for? Browse other questions tagged sleep-wake mac-mini wake-on-lan .

0
Wake on demand no more working
12
Mac Mini 2011 - monitor wakes up messed up
3
How can I tell if my Mac mini is asleep?
0
How can my Mac still be falling asleep with Caffeinate?
1
Remote SSH access to sleeping MacBook Pro only works when 'Find my Mac' application is running - can I make this persist?