In their simplest form, do programs just run terminal commands?

Say for example in a program it lets me select one folder and copy it to another location, on a very basic level is that application running commands that I could run in terminal or is it using some internal OS API to make that move?

Please spare me any vicious responses; I'm just curious and totally aware it can be perceived as a question a 13-year-old would ask.

Conceptually, it always uses OS API - the question is only in what way. There are essentially three options.

Most applications will use option 2. because it is more simple than 1. and more safe and efficient than 3. In order to run an external process you need to set it up properly and you have no control over what it does. For example it is much harder to figure out what exactly went wrong in case of a failure and it is hard to know what it is doing (e.g. show progress). That is why in most cases developers will likely choose option 2, but there is no guarantee. A notable example are applications that use shell scripts for customization - such as installers.

Advanced user note: you can use dtrace facility of OS X to find out what a particular application is doing. For example, you can check any processes it is spawning so you would see the tools it is using (see execsnoop).

I'm afraid the answer is "it depends, but usually the second." Actually, even if a GUI program is running terminal commands, it runs them by calling an API.

A program that is simply a list of terminal commands is called a shell script. Such programs can run in Mac OS X, but they have to either run in a Terminal window or launch a program that uses the GUI if you want to see their output. Other programs can call command line programs through internal APIs.

While most development questions are off-topic for this site, one example that is actually on-topic involves running Automator.

One option within the list of internal commands a program created in Automator can call is the ability to call a shell script, or list of Terminal commands. But that is just of of many options available within its internal API. 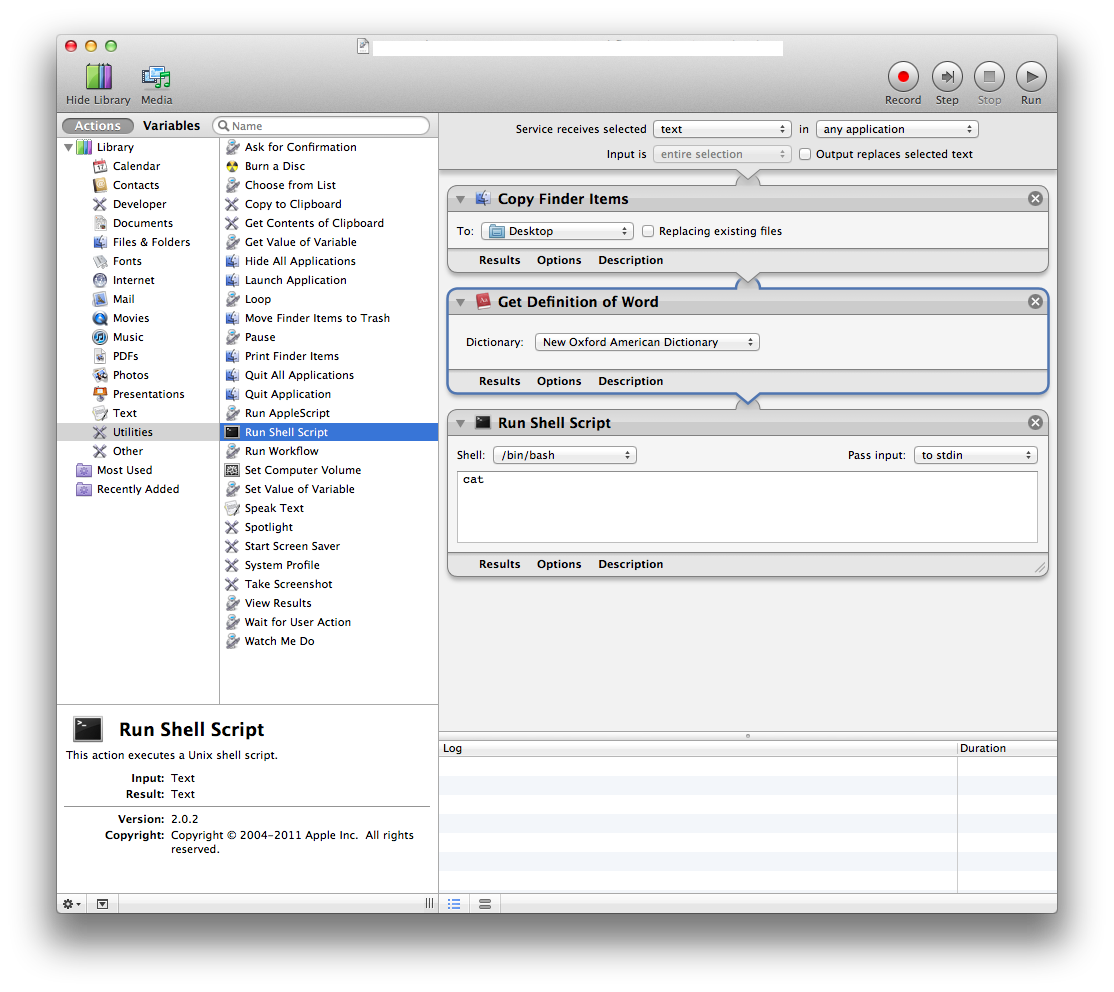 One of the great ideas behind Unix is (was) that if you got an idea for a program, then you would first write it as a shell script - essentially calling a series of commands.

Then, if the program proved to be useful, you could improve on its interface, have users test it, and finally, when you were convinced it was worth it, write a "real" program.

This, of course, was before graphical user interfaces took over, so a "program" here is a CLI command in itself.

You still see this approach in some modern programs, especially if they show system information. Want to build a simple app to list all files in a folder? Just run ls -al, parse the result and show it a table. Have fun with the various parameters, and you have your material for version 2.0

One class of programs that run terminal commands (even though it all starts with an API call) is the integrated program-development environments such as eclipse or Xcode. The collection of tools required for program development is prohibitively large to be contained in, and maintained for, an IDE. Instead, it builds a makefile (a kind of script) and runs it with unix 'make' (or an equivalent) to step through the compile, link, load, and debug process. Make, in turn, runs the compiler, linker, etc. using their command-line interfaces. This lets the IDE be relatively independent of the tool-set chosen by the programmer, and insensitive to updates to the tools.

Applications can run CLI commands to perform a certain task, and some actually do; but due to efficiency issues, professional application developers avoid running the command and rather use the APIs that the command uses to perform the task required.