I have long used an Applescript triggered from a keyboard shortcut to dismiss notifications on MacOS. It worked by simulating a click of the "close" button of every open Notification Center window.

Since upgrading to Big Sur (currently 11.0.1), notifications no longer have a close button. Instead, when you hover over them with the mouse, an "X" button will appear. For a person who has difficulty clicking precisely (I have a slight hand tremor), using the mouse/trackpad is difficult.

Anyone have suggestions on how to restore that functionality so I can just keep my hands on the keyboard?

I am using Automator to test this.

I'll try messing around with it to see if I can make it work with modifications.

Note: If I run the script again, starting from the ungrouped state:

I'm posting a most robust version that evolved from my initial post. This seems to do a reasonable job of closing all windows, but it's sometimes slow to execute. As I've stated in the comments, I don't know much about AppleScript, so perhaps someone who knows what they're doing can tell us how to improve the performance.

Yes, thank you for posting the script, @AndrewJanian.

I received an error similar to @ColinFraizer's when using it as is. I think the issue is the inner repeat over the actions: it's trying to access actions in some cases after the window is closed. A minor tweak fixes this issue for me:

I have an AppleScript that works. I found the elements using UIBrowser. Caveat is that the notification must have a "Close" action. All of the notifications I have encountered have that action.

I found an Automator JavaScript action which works:

This has been annoying me too, but I managed to get something close working today.

First I installed cliclick, a command line tool that lets you simulate mouse movement and clicks. It's available via Homebrew with brew install cliclick.

Then I figured out the coordinates of the time in the top-right, which when clicked, opens the notification centre. This took a bit of experimentation.

Then I figured out the coordinates of the close button that appears on hover. Again this took a bit of experimentation.

Then I wrote a script that uses cliclick and these coordinates to open the Notification Center, move the mouse over where the "clear" button appears, sleeps for 500 milliseconds to give it time to appear, and then click it. It worked!

I then tried to get this running as an Automator service. I got it running from within Automator but though the script worked there, it refused to work when I assigned it to a keyboard shortcut. I bashed my head against a brick wall trying out different permissions etc until giving up.

I tried the HotKey app, but had the same result.

Eventually I thought about trying an Alfred workflow, so I could open Alfred with Cmd+Space and then type "Clear notifications" to clear them. Much more verbose than a keyboard shortcut but... it worked! And no mouse needed. My best guess as to why is that when Alfred runs the script, it always runs from within Alfred, and Alfred already has the required permissions to move the mouse and click on stuff, but when I try to attach an Automator service to a keyboard shortcut, that service runs with whatever permissions the currently in focus app has.

This feels like a horribly brittle solution (what happens when I'm not using my external monitor??) and it seems rubbish that there's no built-in way to do this, but at least it works.

TL;DR a combination of a script using cliclick and an Alfred workflow to run it.

Thank you @lunzwell. I added a error routine.

I wonder though if there is a way to avoid an error message, when accidentally running the script with no notifications on the screen.

I made some improvements to this script:

My full script is in my dotfiles on GitHub here and I have it exposed via an Alfred Workflow here.

I got a working script via cliclick also. Here's my version of the script I use. I've stitched together from a bunch of user libraries I used. I have it mapped to voice control created via Automator instead of a keyboard shortcut.

It still fails when the notification refuses to show the close button no matter how much you move the pointer on top of it.

I've tried most of the solutions offered here, but none has quite worked as well as I want. I've since tried using Keysmith, and been pretty happy with the results.

Keysmith offers an existing shortcut for this. It looks like this: 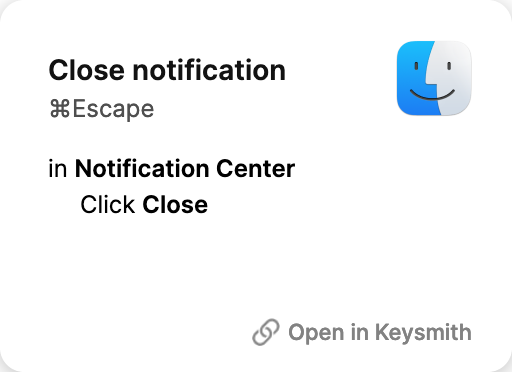 This gives you the ability to press ⌘ esc to close notifications (from any application).

The only issue I had with it was that once the notifications had been closed, the active window of the current application lost focus. Fortunately, you can add an additional step in the Keysmith shortcut to regain the focus of the active window: ⌃F4. That looks like this in Keysmith:

Had anyone considered just using:

The process respawns after doing this. I use it to clear out all the notifications I get with an external drive.

Not the answer you're looking for? Browse other questions tagged macos big-sur .

0
Dismiss macOS notifications with keyboard but staying on focus

6
Any way to send messages to Mavericks Notification Center from another machine on the local network?
0
Record click action and replay via command line?
1
Notification Center frozen in macbook pro with Yosemite 10.10.3
0
Issue with Automator and bash script
2
Sharing multiple files on iCloud by using System Events in Applescript: How to intercept an option?
2
Automator action to run python script on series of files fails in Catalina
0
macOS Big Sur System Preferences Notifications Customize