Where are / are the "counting hand" cursors used in macOS

I was looking around inside the system folders in MacOS and where the cursors are there are 3 cursors I've never seen before called countinguphand, countingdownhand and countingupandownhand. You can find them in /System/Library/Frameworks/ApplicationServices.framework/Versions/A/Frameworks/HIServices.framework/Versions/A/Resources/cursors(I'm on mojave so it may be different), Or go to System/Library/ and search for PDFs. I haven't found any info about these cursors online, it doesn't look like css supports them... So are they just leftover or is there any use for them I can't think of? Thanks in advance for any info!

The gloved hand icon, designed by Susan Kare, has been with us since the first version of Mac OS. However, it looks like the counting version didn't appear until System 6.0.4. System 6.0.4 introduced a new installer version—3.0—designed to support customizable multi-disk installations. As part of this, we get a few new loading icons! This includes the hand in question, which plays a counting-up animation during installation.

Fun fact: if you type "ski" on the setup screen, you get a little Easter egg: an alert box which allows you to choose from one of five different idle cursors! 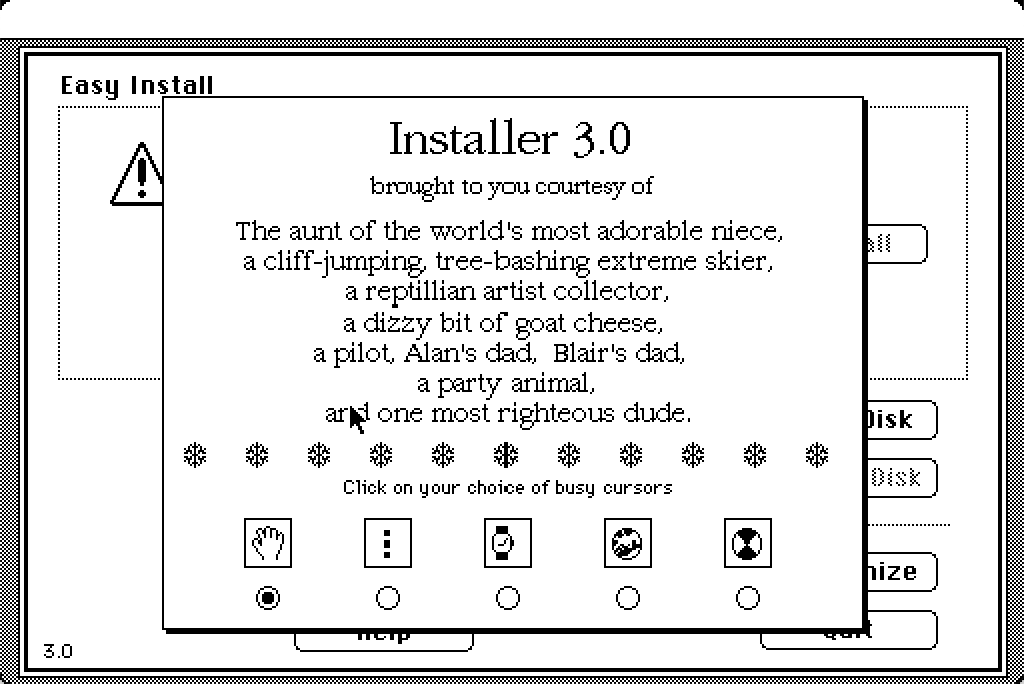 You'll notice that (among others, including what looks to be the precursor to the current idle "busy but clickable" icon) is the classic watch. However, notice the hands; this isn't quite the same version. System 6.0.4 didn't include an animated watch—only a static one—but the one in this installer includes an animated one. We can confirm this by using ResEdit to inspect the installer. 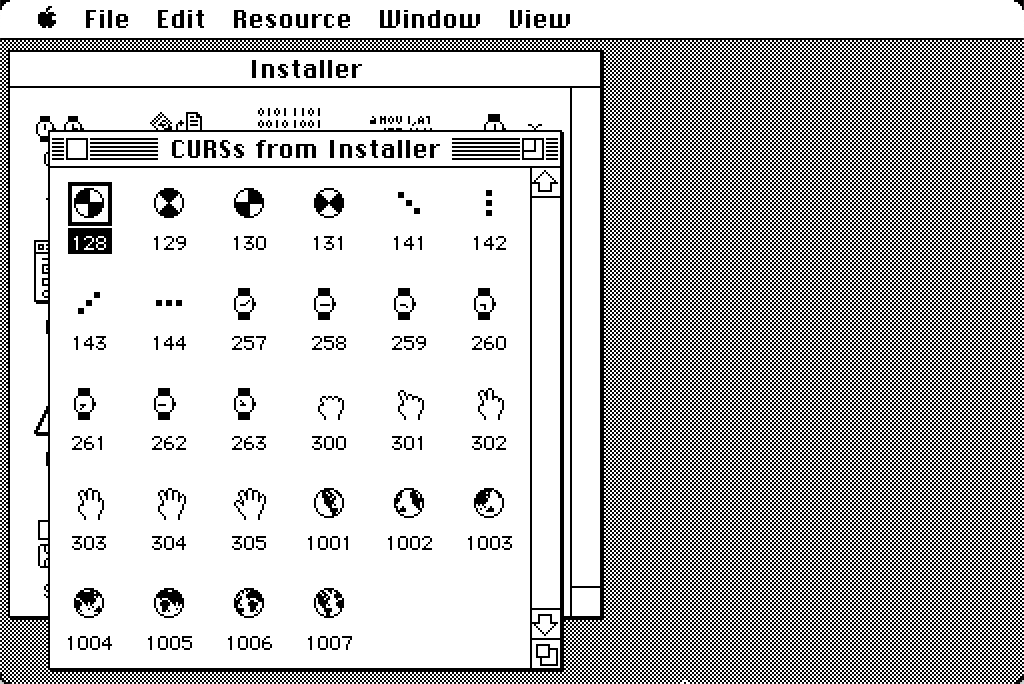 Even after installation, the animated icons aren't copied over to the system. 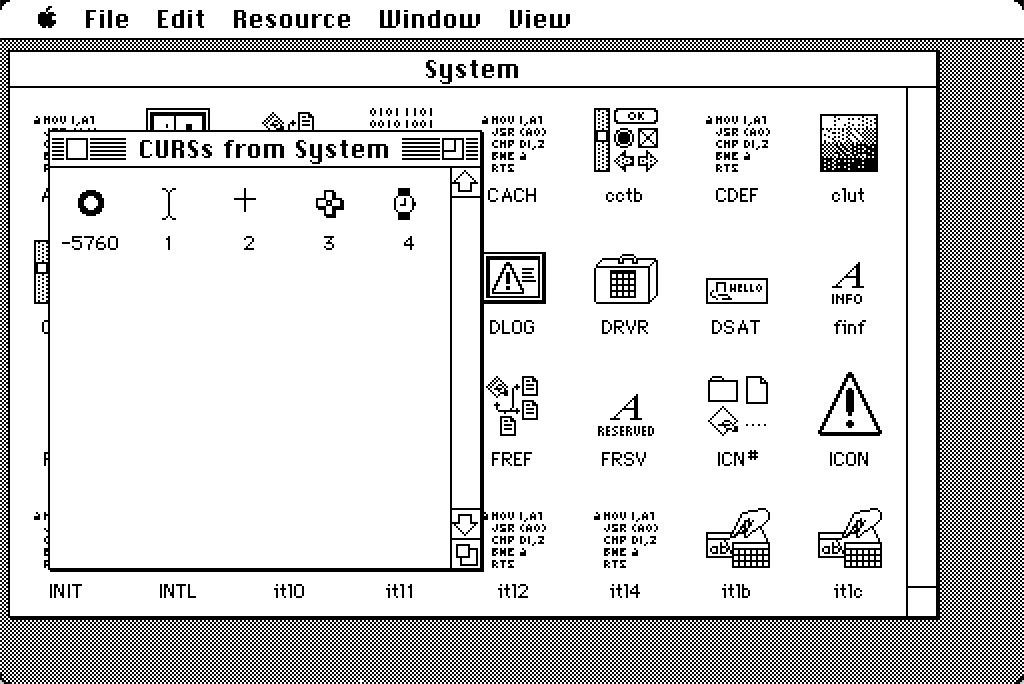 This means that there's no way for other programs (or even the system) to use it, short of manually copying the icon from the installer and using it themselves. Different icons came and went between installer versions (7.0 and 7.1's installers do away with the Easter egg and cut the icons down to the animated wristwatch and hand), but they remain exclusive to the installer. I would say this was an intentional decision to have exclusive icons to the installer, but the animated icons (including the famous animated wristwatch) were later added to the System installation (I'm not sure by exactly which version, but sometime between System 7.1 and Mac OS 9.) 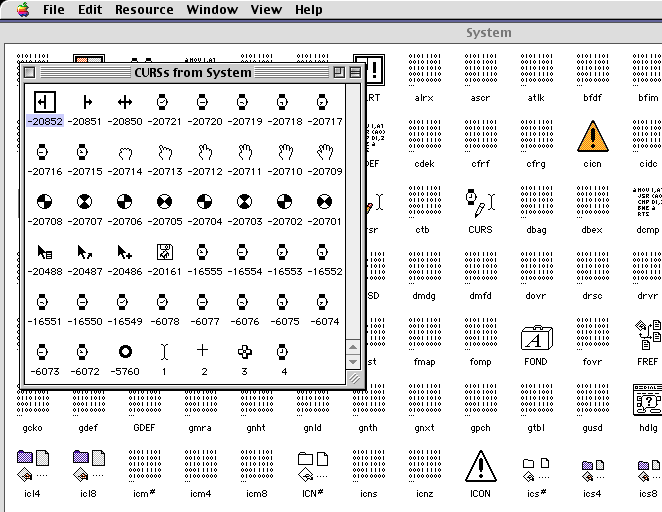 So if they were added intentionally, surely something must have been using them. The watch certainly gets used plenty; however, I haven't been able to find anything that uses the hand outside of the installer. Further, there's no option I could find in the Control Panels (Appearance, General Controls, Mouse, Screen, Text, etc.) to switch to use the hand over the wristwatch, so it's not an optional extra.

The wristwatch was replaced by the blue waiting animation during the jump to Mac OS X (though it wasn't respected in all conditions, such as the standard cursor displaying in response to the CSS cursor: wait; as recently as macOS 10.13.6 High Sierra), but stuck around regardless and all the way until macOS 10.15 Catalina with the deprecated Carbon interface (and occasionally some other apps for no clear reason, though it may have something to do with system resources or other GUI frameworks). Just like with Classic Mac OS though, there's no way to swap out either the old wristwatch or the current blue-spinny-ball for the counting hand through any "normal" settings. The hand, including the counting version, has also received updated artwork throughout the years, so it's not just like they've been left unattended.

So, if it's not being used as an alternative to the waiting cursor, could it be used for something else?

Digging a bit deeper, we find that the cursor is represented using an NSCursor object under macOS. Here we can see all the different types of static cursors available to developers—including the hand, in three of the six positions: closed, open, and pointing. No animated cursors though, and we're still missing two of the positions.

Unfortunately, I couldn't find Apple's source code for the NSCursor. However, GNUstep, an open source GUI framework that tracks pretty closely to the official Apple Cocoa framework has an NSCursor class. Unfortunately, still no direct mention of the other hand positions. There is a count method, but there's no clear documentation for it nor code usages I could find, let alone anything to tie it to the hand. The only macOS application I was able to think of that features a regular countdown is the Screenshot application; however, it doesn't use the hand, and neither does its older counterpart, Grab (despite the name.)

So, my guess? They needed three of the six positions, someone ported all of them for sake of completeness, and no one has seen any reason to remove them. As far as I can tell, without manually including the assets or work by the end user, they're pretty much inaccessible to developers since macOS's sole remaining native GUI framework provides no clean way to access them.

Not the answer you're looking for? Browse other questions tagged macos mojave mouse cursor .

3
How to disable thumbnails icon preview only for video files in Finder?
0
TextEdit Crashes on New Document (SIGSEGV)
1
Issues with /usr/lib/libcups.2.dylib. x86 applications will not execute
0
setting JAVA correctly on MAC
1
How to make a clean install of OpenSSL on El Capitan
9
Location of the resource files for the spinning wait cursor?
4
Where Exactly are Apple Diagnostics Results Stored on Disk
12
What happens with the appearance of the folder icons in dark mode of macOS Mojave Finder?

// TODO sg: TMP solution until we are confident in our current implementation of async imports // once we are, we can move the if into the js entry file and dynamically load the mark obsolete module