I have a work-issued MacBook Pro (16-inch, 2019) running macOS Catalina, and it's not usable as a laptop, because it runs too hot, making it impossible to hold on the lap for any significant amount of time.

There's nothing in System Preferences to address the problem; I know it has very powerful fans, but they are generally turned very low and are inaudible, and there doesn't appear to be any free software that would automatically control said fans to attain a desired thermal profile (e.g., maybe 35degC or lower) to make it usable as a laptop on a lap. This is confirmed by third-party reviews as well, as Notebook Check shows that it can run as hot as 42 degC on surface, when the ambient temperature is merely 19 degC, which possibly means mine's running at maybe 45 degC at 23 degC ambient, which is surely not comfortable.

It is my understanding that the new Apple silicon M1 Chip are supposed to be much more energy efficient than the older processors; however, it's also the case that MacBook Air no longer has a fan in the newest iteration.

Are the new M1-based MacBooks finally usable as actual laptops, to keep on the lap for an extended period of time? (Or is there any free software for MBP 16" to reign in the thermal envelope?) And why doesn't Apple offer any "laptop mode" options for its laptops, to automatically spin up the fans if the temps get uncomfortable for keeping on the lap? Windows has software like SpeedFan that does that easily.

The M1 machines are much more portable since the Processors fit within a 10 Watt thermal envelope. Intel CPU fit in about the same thermal design power (TDP) envelope, but measures and battery life show the M1 run far cooler in the same metal case.

Apple always avoids calling them laptop computers, but the Apple Silicon M1 is designed to be far more efficient which makes them cooler, use less battery and do more work for the fixed battery power available.

According to iPhone in Canada, they did a temperature check of the new M1 MBA and MBP and found them to be cooler than previous models (forgive the extended quote but I wanted to get all the info into the answer).

We ran a Cinebench benchmark (runs 10 minutes straight, simulating an export operation) on both the MacBook Air and MacBook Pro

Using a thermal imaging camera, Heads of Technology shared the heat distribution on the bottom of each laptop. The following temperatures were taken after a short cooling period (5 minutes or so from their video) after Cinebench had completed.

You can see the M1 MacBook Air has a temperature of 37.4C (99.3F), with heat concentrated in the upper middle back area, favouring the upper left, looking at the laptop from the bottom: 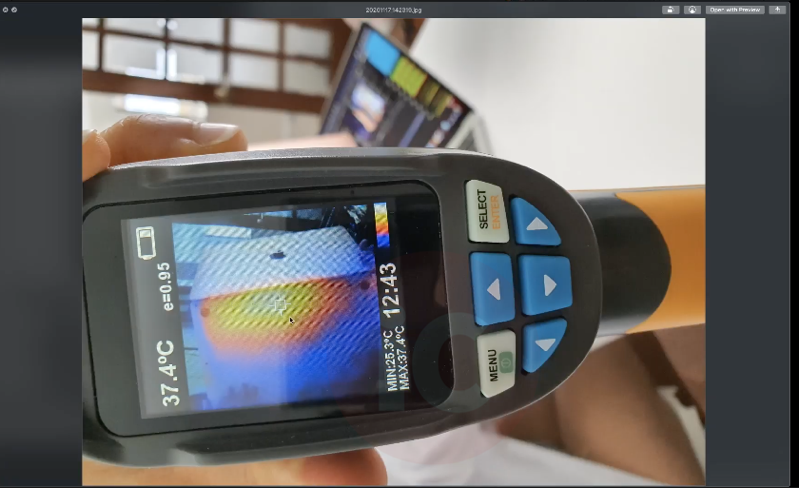 The M1 MacBook Pro had a slightly lower temperature of 36C (96.8F), with heat concentrated along the centre and slightly more towards the upper right compared to the left. The MacBook Pro has a fan to dissipate heat, while the MacBook Air does not: 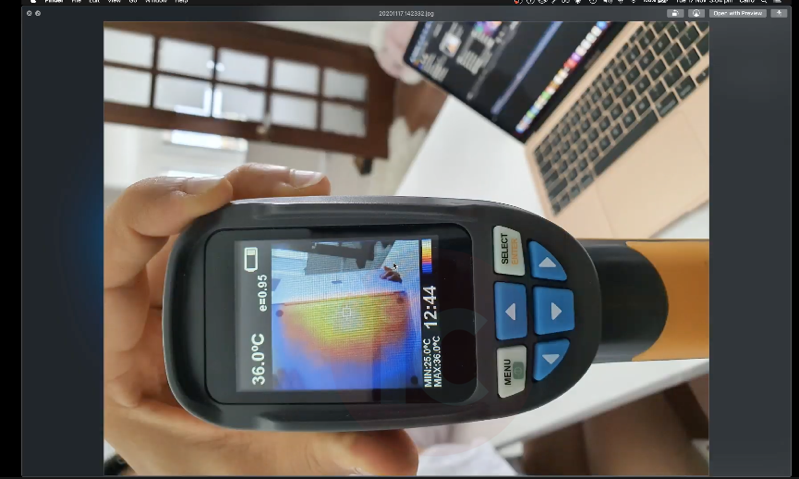 These temperatures are really low compared to non-M1 2020 MacBook Air units, which many customers have been complaining about overheating earlier this year, with temps up to 80C and fans spinning at 2-3000 RPM. Now, you have a fan-less M1 MacBook Air that can much, much cooler, similar to the temperature of the human body.

While this is not an exact scientific measurement, it should give you an idea of how much cooler these run. Hopefully, someone who owns one can put it on their laptop for a while, do some work, and come back to add their experience.

Yes, the M1s use radically less power, as mentioned before. I'm surprised, however, that (for example) Macs Fan Control or iStat Menus can't bring the fans up and the temperature down on your 16? What happens?

Not the answer you're looking for? Browse other questions tagged macbook-pro hardware temperature .

12
Are there headset adapters usable for MacBook Pros?
2
Macbook Pro 15 mid 2012 - not able to solve overheating
2
The fans in my MacBook Pro (2007) run at full speed for no reason?
0
Horrible high pitched noise from iSight mic only under OSX
2
Upgraded iMac 5k restarts randomly
3
MacBook Pro fan is not running on default settings regardless of how hot it gets
1
Is it normal for fans to run at 6,000+ rpm at <20% CPU load?
3
MacBook Pro Thermal issues
3
After re-assembly, iMac 27" fans blowing at full speed all the time
0
Fans blaring again after a brief hardware fix