My device is a late 2013 Macbook Pro and just a week ago I had been running macOS Big Sur.

I wanted to pass on my device to someone else so I followed the steps in the below links to make sure all of my data was erased and the device is set back to factory settings:

The device is now running OS X 10.9.5 as expected. However, when I download macOS Big Sur from the App Store and try to install it, a message appears saying I cannot continue (see below image). The message says:

I have tried and checked the following:

Though some of the above may work for others, it hasn't worked for me. I've probably tried erasing my HD and reinstalling OS X about 6 times now.

I don't know where I may have gone wrong, I made sure I followed each step specifically and carefully. I've been able to install macOS Big Sur just a week ago, and now, after following Apple's official guide to essentially 'factory reset' my device, it is not installing. 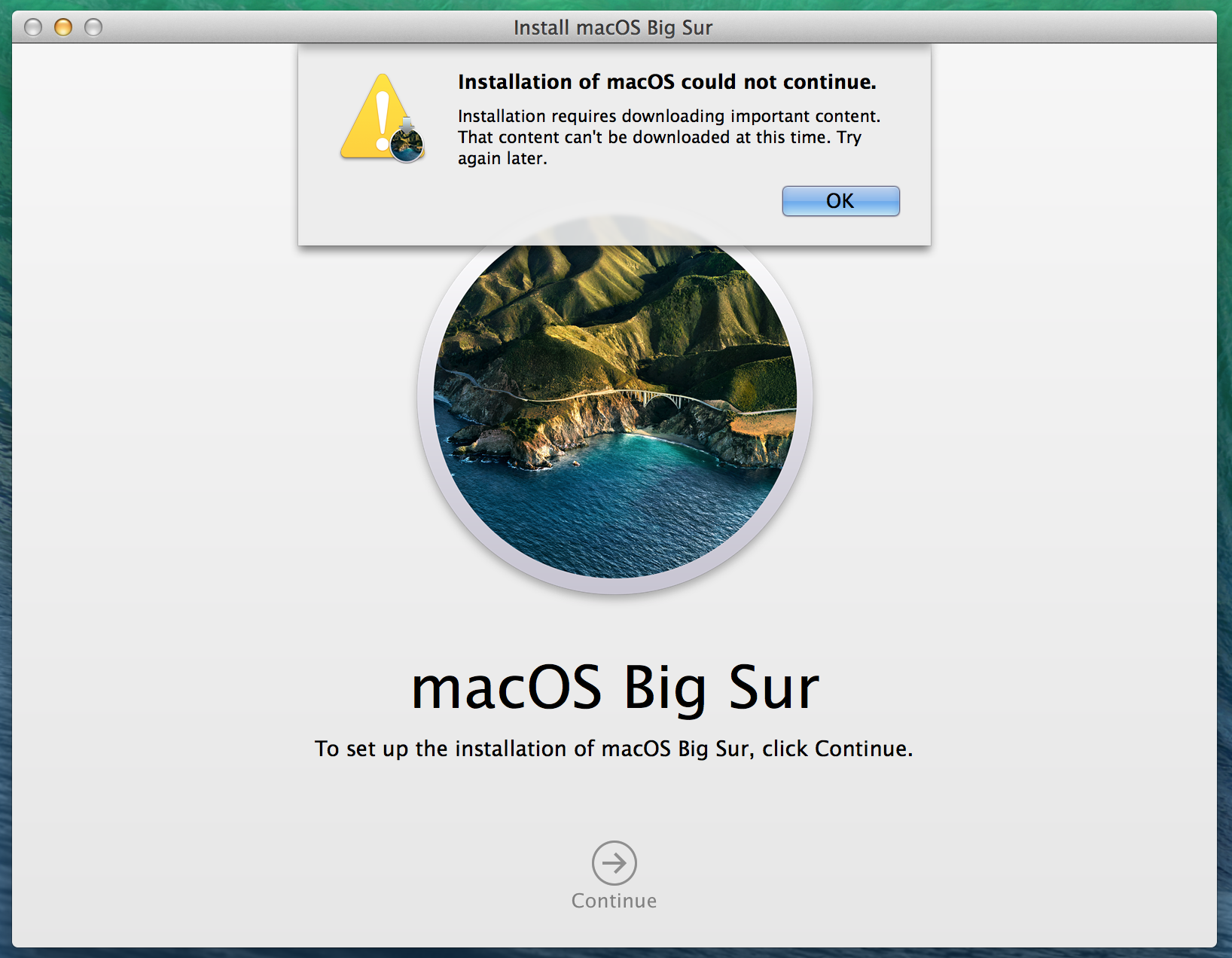 The short answer, is do not install Big Sur on 2013 / 2014 MacBook Pro if you can wait. Stick with Catalina if you can and need it to be stable and supported.

Thank you for this post - I found myself in this exact situation, following the same "Apple recommended" procedure to perform a factory reset after already updating to Big Sur. I was left with a useless (likely needing repair) machine until I found this post and followed the steps to reinstall OSX and then upgrade to Catalina.

I believe that we had previously upgraded to Big Sur 11.0.1 20b29, released November 12th. However, Apple released an "updated" version, 20b50, on November 19th that removed the late 2013 and mid 2014 Macbook Pros from the compatible list, due to issues that left some users with blank screens.

I imagine that once Apple fixes these blank screen issues, we'll be able to upgrade again.

I had the same error "Installation of macOS could not continue" while trying to install macOS 11 "Big Sur".

I had to install Catalina first (see the "Download macOS" section of this support article for instructions) and then the upgrade to Big Sur worked fine.

As noted above your MacBook is blocked in the build 20B50. If you feel like living on the edge, you can however download 20B29.

One way to download the previous build, is by using macadmin-scripts from munki on GitHub and choosing the Developer Seed. This still lists 20B29 for download. I've successfully installed Big Sur using this method on my 2013. MacBook Pro Retina. But no guarantees, there are reports of bricked MacBooks so proceed at your own risk.

For me it is option 3. This can change as available builds can differ.

Not the answer you're looking for? Browse other questions tagged macos install error osx-server big-sur .

59
How can I download an older version of OS X/macOS?
1
macOS Big Sur update problem