and it will then play a certain tunein radio station

Currently, the only way for me is to go into the other room and start the tunein radio station on my Mac in the Music app and then select both the Mac and the HomePod as airplay output. But that's something my humble assistant should do for me … Thanks!

I guess, I'm just missing the obvious solution. But for now, this is working for me:

A Siri shortcut executes an Apple Script on the Mac that starts the radio stream with the Music app and adds the HomePod as airplay output.

On the Mac, create a script using the Script Editor application and save it e.g. to ~/play-radio.scpt.

In the Playlist "My Radio Playlist", I've added the radio stream I want to start. I suppose, one could also add the radio stream's url directly. But this way, I can modify the playlist without re-opening the script again later.

2. Create Shortcut to execute the script

With the device that has been paired with the HomePod, e.g. the iPhone or iPad, open the Shortcuts app and create a new shortcut that is named after the desired Siri command, here: "good morning" 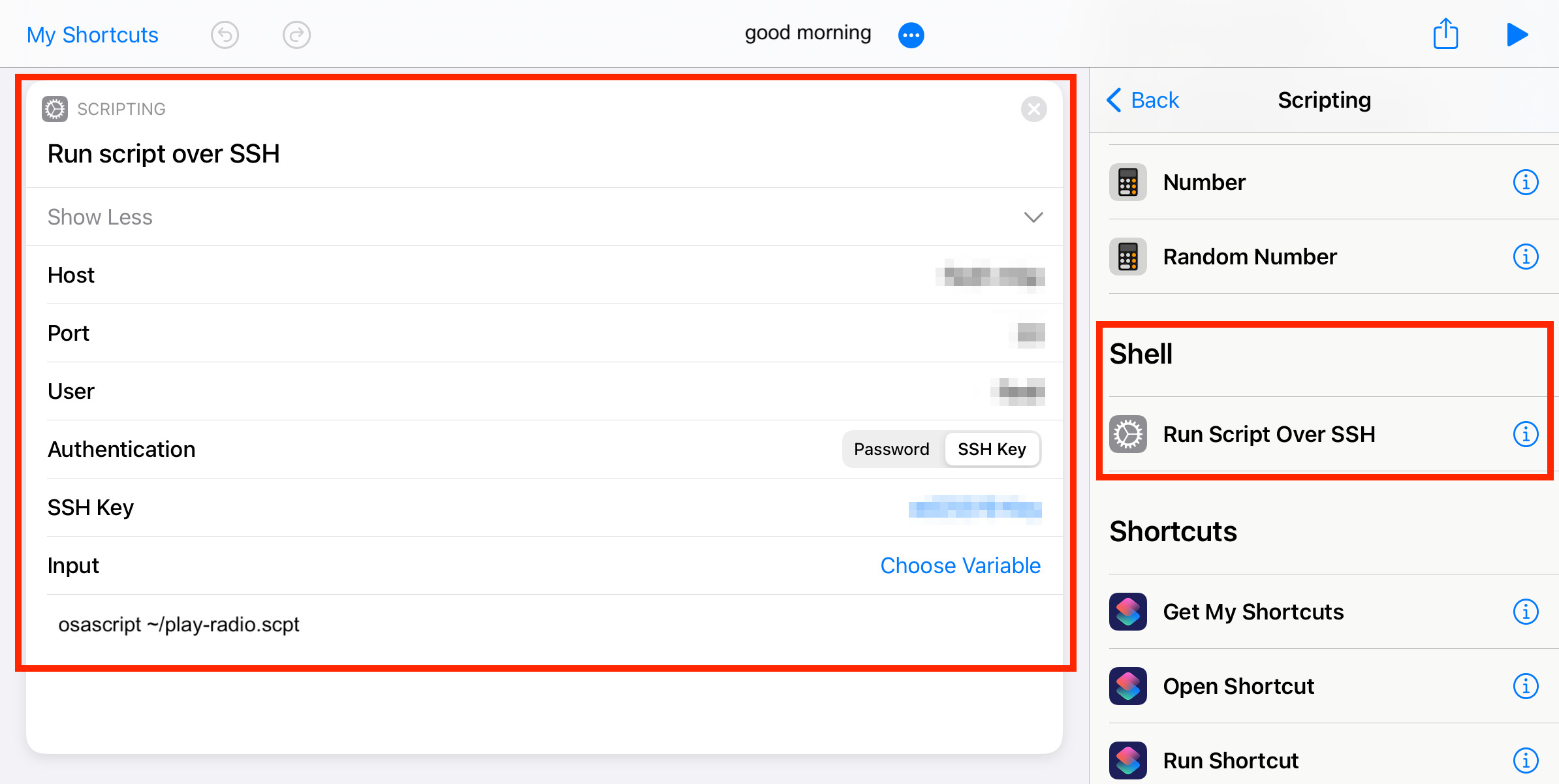 Add the workflow item Run Script Over SSH. Enter the hostname of the Mac and your Mac's user-account name. Choose "SSH Key" as authentication method. Add the command to execute the apple script:

If you haven't done so already, export the public SSH Key of the Shortcuts app by clicking on the SSH Key entry, share, and then air-drop it onto your Mac.

On the Mac, add the key to the file ~/.ssh/authorized_keys.

Attention! This will allow the Shortcuts app on your iOS device to ssh into your Mac.

If you haven't done so already, activate SSH remote login on your Mac:

Now the HomePod will understand "good morning" and execute the script, which will start Music on the Mac playing the radio station on the Mac and the selected AirPlay devices.

Not the answer you're looking for? Browse other questions tagged music automation siri airplay homepod .

22
Prevent EarPod play/pause button from activating Siri on macOS Sierra
5
No longer able to AirPlay from iTunes to Homepod directly
0
Occasionally, HomePod has trouble playing anything I ask it to, until I restart it. Why?
2
Homepod is on same wifi network as my other devices but doesn't show up for airplay or personal requests
1
How can I set the default audio volume for Siri playing music on HomePod?
1
How can I create a morning routine with my HomePod that would read me today’s weather?