TotalTerminal (former Visor) is an awesome plugin for Terminal that turns it into a Quake-style console that slides down on a key combination.

This is tremendously useful for development because I can type commands while writing code or browsing without extra window hustle.

Unfortunately, TotalTerminal doesn't play well with fullscreen apps. If I put Sublime Text in fullscreen mode and trigger Terminal, Mission Control will scroll to the nearest non-fullscreen space available, and only then will it show the Terminal.

This is very annoying. Is it possible to fix or work around this issue?

This is a known issue and the author doesn't plan to fix it.

I encourage someone to go further and implement it because personally I don't use fullscreen apps right now and I don't plan to fix this anytime soon.

Luckily, there is a workaround described by vvlad.

As an workaround you can set LSUIElement in Terminal's Info.plist

It has several drawbacks but otherwise works like a charm:

How to Do It

Apple changed the way the LSUIElement works in Yosemite. It will cause the app to run as an agent but will no longer cause it to overlay full screen Windows.

To fix, open up the Info.plist file per other people's instructions and add the following two elements:

4 - All suppressed mode. In this mode, all UI elements are hidden, including the menu bar. UI elements may show themselves automatically in response to mouse movements or other user activity. This option is available only in OS X v10.3 and later.

TotalTerminal has an option in its preferences panel now for enabling the same underlying option @Dan's answer illustrates setting manually: 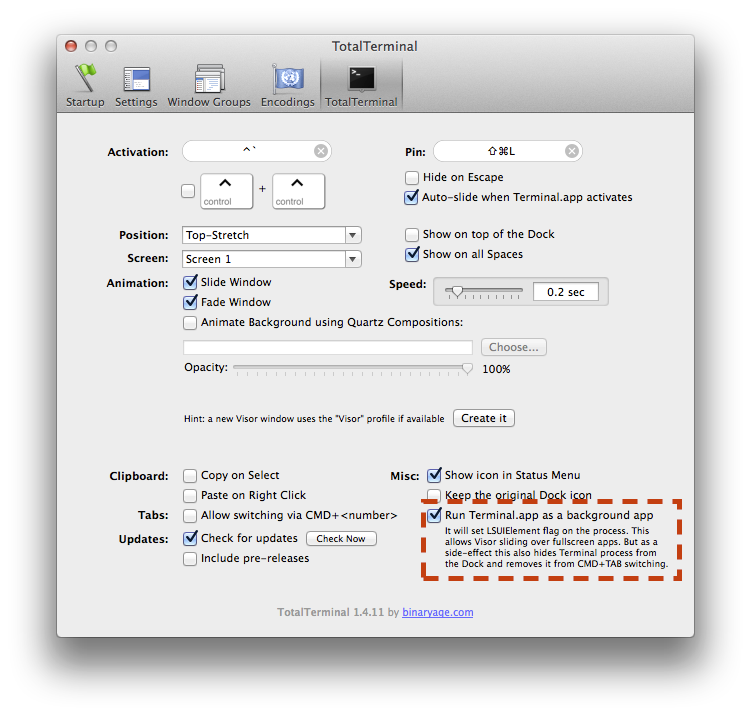 Not the answer you're looking for? Browse other questions tagged macos terminal fullscreen plugins .