I have been using a HP Envy 4500 printer with my iMac for 2 years using HP Easy Scan - with no issues.

Today I tried to scan a document, when I press the "scan" button on the app a pop-up appears stating:

To me this indicates the macOs has decided to block the program.

Why has this started happening? and how can I tell macOS that "HP Scanner 3" is no malware.

Edited to add:Using etc built in Apple/macOS scanner (which doesn't have all the features of HP Easy Scan) works so that proves this is not a hardware issue.

Edit: While the app now launches, it still won't let me scan. Found this https://forums.macrumors.com/threads/hp-driver-framework-broken-in-catalina-10-15-7.2262865/post-29100622 saying that the certificate from HP has been revoked, and we're SOL until HP fixes it.

I had this same issue this morning, did a search and found this. Apparently there is a version it the App Store. I downloaded that and boom it's working. Guess they want you to use the one that's been "vetted".

This message happens when the certificate used to sign software gets revoked. The OS does check for revocations online so yes it blocks apps even if you don’t update the apps or the OS.

For HP printers and scanners, the problem is the revocation of the certificates HP used to sign their software, not that macOS checks for revoked certificates. Things are working technically how they should, but from a support and culture perspective, I am certain thousands (perhaps millions) of people are realizing “suddenly” that this is built into their OS.

The vast majority of HP apps for macOS (which are slightly different than the driver stubs needed for printing) were signed by now revoked certificates.

You are correct in scanning software will not work unless you ignore revoked signed apps or update your software. Here is the package we pushed to thousands of Macs around noon yesterday to address yesterday’s specific certificate revocation.

If you want to check your software, here are two apps I love and use to check certificates and signing status.

I tried to update the driver from HP, but that did not help much.

What worked is to use HP Uninstaller from https://support.hp.com/us-en/document/c06960563

After uninstallation was completed, I installed the latest HP driver again and that message is gone. Now I can print and scan with no issues anymore.

TLDR; Reinstall the printer using the "Generic PCL laser printer" (even if it's an inkjet!). 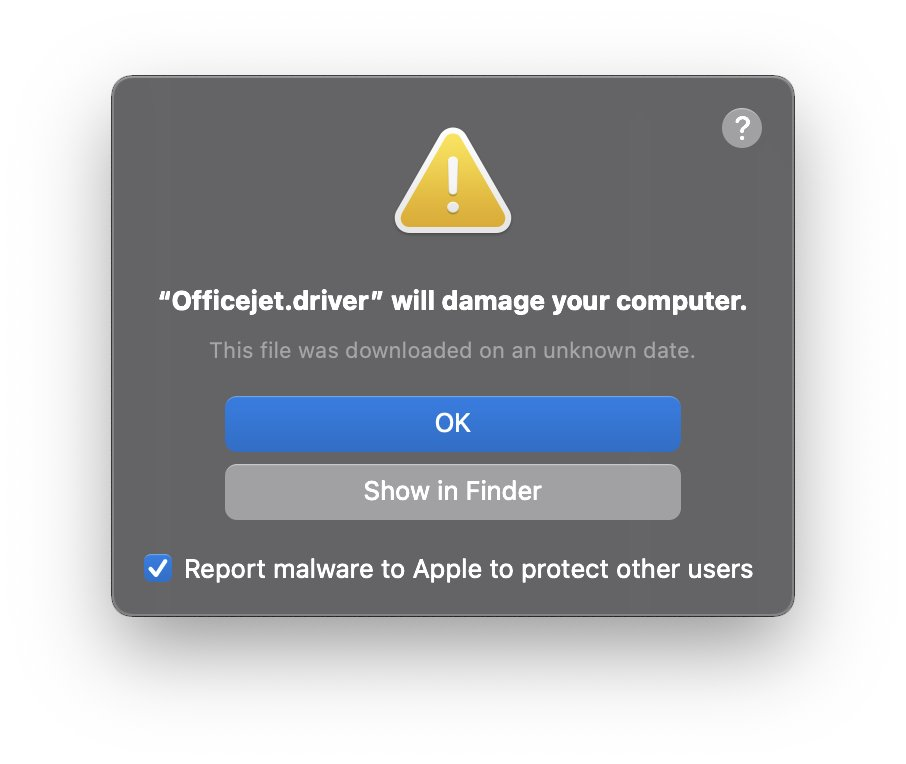 I uninstalled it but couldn't install the HP software because it gave me this warning: 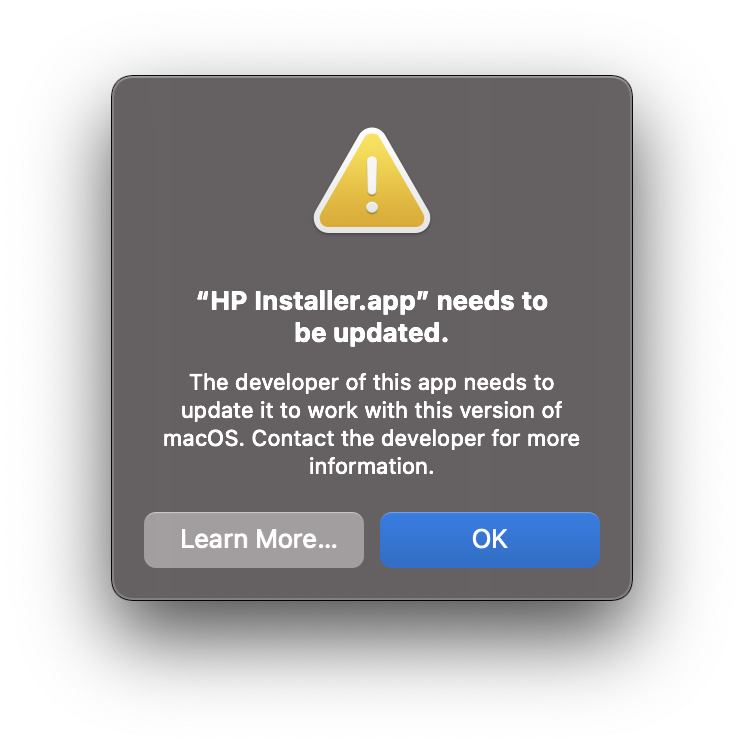 I then removed the printer and re-added it using the "Generic PCL laser printer" (even though it's an inkjet!). Yay : 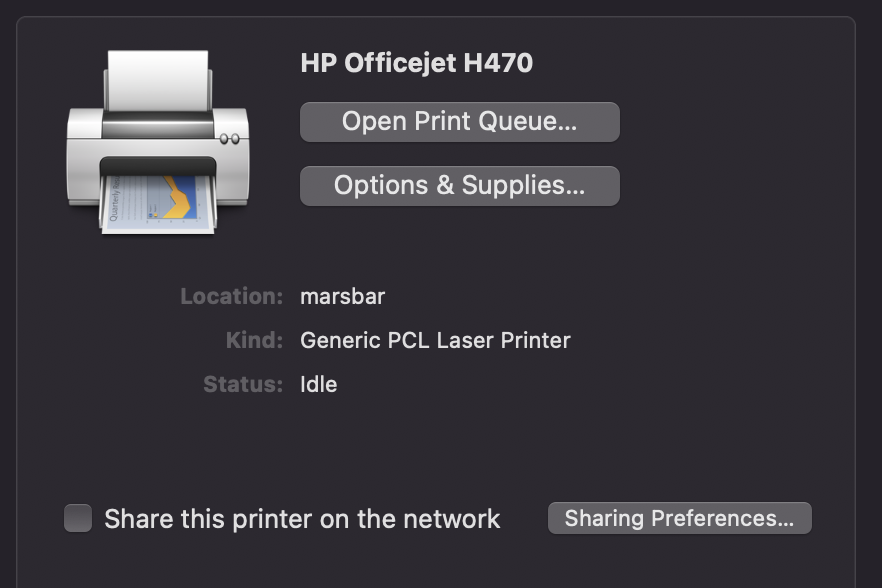 No, sorry. That particular message does not indicate macOS has decided to block anything. That wording is so clearly wrong, it indicates someone is trying to scam you. Prolly, the scam will involve an instruction/suggestion to replace the "suspect" software.

I've been providing tech support to both Apple and HP users since before there were Macs, let alone macOS, and I've never seen or heard of that wording.

If you have support contracts call Apple and HP and ask them to ignore the general meaning and explain the specific wording.

Failing that, here in the UK you might take the same Question somewhere like Stormfront… next-best thing to an Apple Store but with reasonable prices.

' "HP Scanner 3" will damage your computer…' is not wording Apple or HP use. If it were genuine, that would at best be Windows-style wording… doubly interesting since malware-merchants tend to wean themselves on Windows.

'this file was downloaded on… an unknown date' is not a detail Apple or HP would be interested in, even if it was their wording. 'from an unknown source' might work - though usually, that's macOS or its affiliates being over-zealous and "warning" the poor User about something that matters not at all.

'Report malware (to Apple) to protect others' might be Windows-style wording, if it were genuine.

Not the answer you're looking for? Browse other questions tagged macos security malware certificate scanning .

10
Stopping false positive malware warnings in Catalina?
10
Does macOS phone home to Apple's servers before running an app for the first time?
2
How can I fix '"HPDM.framework" will damage your computer' on macOS Big Sur?
2
How can I force-update HP printer drivers?
2
My 2017 iMac is unable to print! But my old Mac Mini prints just fine! Any insights?
1
How to resolve an HP printer failure ("filter failed") after updating to latest drivers?
1
Printing Error - Stopped - The file '/private/var/spool/cups/tmp/...' could not be opened

0
How to scan from my HP-1610 (all in one) networked printer/scanner (Lion)
1
WeTransfer email received without ever using the service
3
Samsung Easy document Scanner won't communicate with scanner on OS X Catalina 10.15
2
"SecurID" will damage your computer?
2
How can I fix '"HPDM.framework" will damage your computer' on macOS Big Sur?
1
Error Message Says FileZilla Will Damage My Computer
0
“24B93E7F-8822-4465-B473-7BE7BB8E3E4A” will damage your computer. You should move it to the Bin
0
Printers & Scanners not showing scan tab for Officejet Pro 8600