Is anyone able to install a generic printer driver for old Canon printers? I have an old MP140 for which Canon is no longer updating drivers. My Mac doesn't automatically find any drivers so I'm stuck trying to add the printer without any drivers - which my Mac keeps me from doing by graying out the Add button: 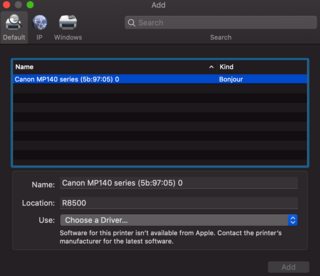 I'm hoping to find a way to get this printer running with some generic 3rd (4th even!) party software. I tried connecting the printer via USB cable and ran into the same problem.

It's unlikely you'll find a generic printer driver for this particular model.

"Generic" printers use languages like PCL (Printer Command Language) (Developed by HP), or Postscript (developed by Adobe). Additionally, they could emulate other printers like "HP LaserJet," "Epson," and even "IBM." There are some Canon printers that do have this type of emulation support like the BJC-210, however, I can find no documentation whatsoever for the MP140.

Just as an aside, there are generic PPDs (CUPS Printer Description/Definition) for Canon Postscript printers.

On the scanner side of things, I did find that the scanner is TWAIN / WIA compliant. You should be able to find generic TWAIN drivers, but WIA (Windows Image Acquisition) is Windows only. While TWAIN drivers for Mac will exist, the problem is most are 32 bit making them incompatible with Catalina (I obviously don't have a MP140 to test to see if it's natively recognized).

My recommendation is to retire it. It's obviously a quality product, but unfortunately it's hamstrung by a lack of "pro grade" features like Postscript and PCL printer languages. When shopping for your next replacement printer, go a step up and get something geared for business and not consumers. The consumables will be less and the lifespan much longer (I have an old Datamax label printer that still works because of PCL compatibility; it's not even USB!)

Not the answer you're looking for? Browse other questions tagged macos printing driver canon .

3
How to get Mac OS 10.8 to see Canon MF4370dn Printer drivers
1
Missing Canon Printer driver for OSX Mavericks?
0
Are these Canon websites safe to download printer software?
2
How does Mac gather printer information (mainly driver) after a printer is selected in the list of printers to add?
6
How to transfer printer drivers from one mac to another?
1
How can I save my carefully constructed printer presets before I have to re-install my printer?