Did the latest iOS or Zoom update break screen sharing when in split-screen mode?

I use Zoom every day for teaching online classes, and I always use the Zoom app for iPad to screencast my Notebility app, which I use as a digital chalkboard. Frequently I will also open a second app in "split screen" mode -- for example I might demonstrate something using the Desmos graphing calculator app on the left while I make written comments about it in Notability on the right.

Yesterday the Zoom app updated to Version 5.3.1; on the same day, my iPad updated to iOS 14.0.1. Suddenly screensharing in split-screen mode seems to be no longer supported: every time I try to open a second app while screensharing, the notification below pops up: "Screen recording has stopped due to: Recording interrupted by multitasking and content resizing."

I’m not able to determine if Apple messed up wtheir iOS update, or Zoom do it with their app update or if this is an intended functional change. This same error has been reported by a user of Microsoft Teams, which makes me suspect that the culprit is the latest Apple update. 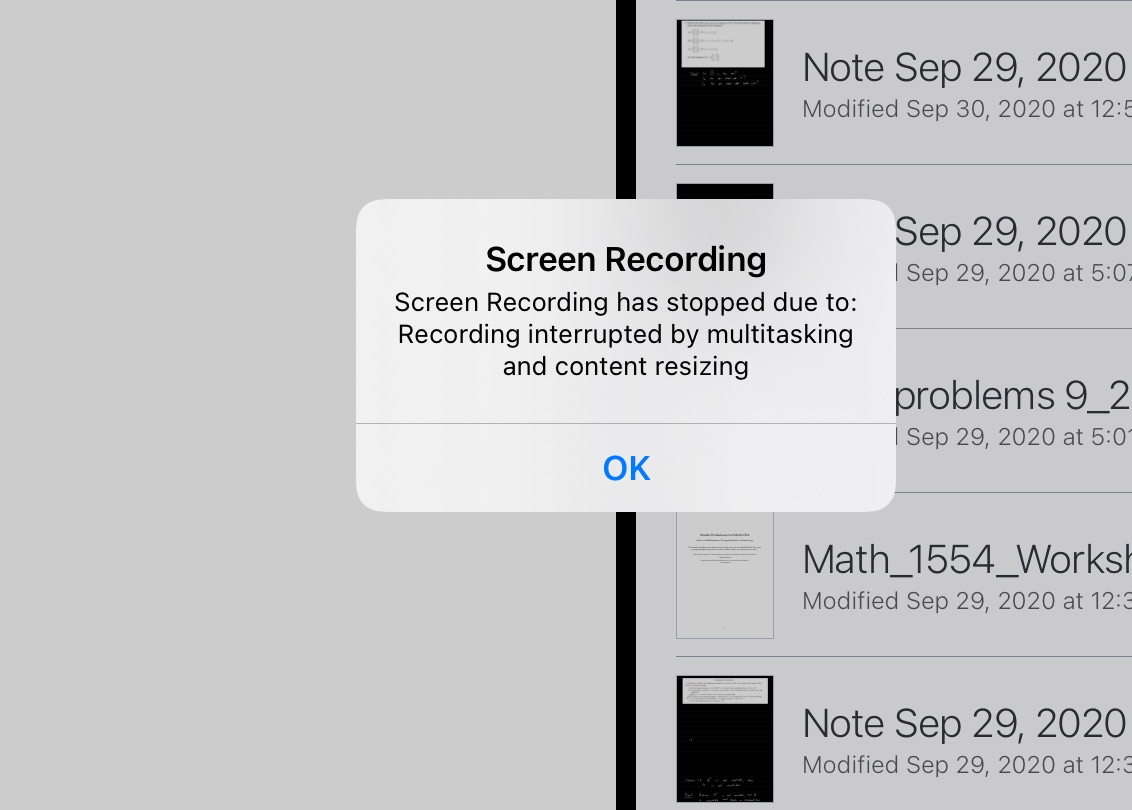 I must emphasize that this is a brand new problem. I have done this routinely for months now and never had an issue before.

Who broke this functionality?

EDIT (added January 2022): I haven't tried in a while, but I am happy to report that in iOS 15.1 this problem appears to have been fixed.

This is related to iPadOS 14 and all apps that screen share will need to update and use a new SDK/API or Apple needs to ship a new update for one app to broadcast the content of another sandboxed app.

On iPadOS 14.0.1 only local recordings can record split screen multitasking, no apps I’ve tested can broadcast. We are evaluating if we use a video capture device or have a computer present while we wait for updates from our conference vendors (Microsoft, Zoom, etc...)

Here is an article about zoom screen mirroring for iPad:

15
Why is the update button in "App Store" app opening the app instead of updating it?
2
iOS 11 split screen doesn’t work on iPad mini?
4
Erase iOS device with recovery mode without updating to latest iOS version?
1
On iPad Pro, does some apps stay full screen even when working in a 2 app side-by-side mode?
3
Spotlight search stopped working after upgrading to iOS 13
1
Trying to use Notability in split-screen mode on iPad
0
Screen recording ios audio zoom
2
How to get Photos People album to populate?