I did some googling and was pretty surprised to find nothing out there on this subject.

I listen to music in my car via my iPhone plugged into my car's USB port. I have always been able to tell that the EQ curve on the iOS audio output is lacking in certain frequencies, but now that I've added good speakers and an amp to my car, it's very apparent.

What's the best way to analyze the EQ curve coming out of the iPhone? My amp has DSP built-in to it, and if I can see the EQ curve as it is, using some pink noise, I can make adjustments in the amp to try and flatten it out.

I have a Windows PC and Mac, but as of yet, I can not figure out how to plug the iPhone into the USB port of either computer and actually get it to play audio into the computer. Else I would just use some RTA software and do it that way.

Firstly, I doubt it's the phone, unless you have a user EQ curve applied, so I wouldn't start by trying to measure the phone's output, I'd measure how the in-car is dealing with it.

Do you have a good, flat mic you could use on another device as a reference?
This is the kind of task, if I wanted accuracy, I'd just get the phone playing back some quantifiable white or pink noise as though it was an iTunes song on a loop, then measure the result on another device; tweak the EQ curve on either phone or in-car as you go.

tbh, though, it's the kind of task I would normally do just by ear [I'm a retired sound engineer so I'm not too bad at it;) especially for something like a car, where road noise is going to be a huge influence. I'd do the initial test & tweak stationary with engine off; again with engine on & re-balance, then drive a while & listen; park up & mod to suit the noise difference. Rinse & repeat until happy.
Watch out for if your in-car has any kind of 'loudness' control, where bass is emphasised at lower volumes. these can be tricky to fight against work with…. and flatten any EQ curve already applied, at least to start with.

I've never noticed any iPhone/Pod/Pad to be anything other than 'flat' or at least within decent tolerance so long as there's no EQ curve set by the user [& boy, have I seen some massive fails programmed in by users thinking they're 'improving' the sound]. It's usually the in-car that's the issue.

For a semi-related issue, see my answer on How to do speaker correction on a MacBook Pro Retina where I set out some dramatic curves to fix cheap computer speakers ;)

You connect your iPhone to your Mac via a Lightning-to-USB(-C) Cable.

Then, in the "Audio MIDI Setup" app (/Applications/Utilities folder), you enable the iPhone as an audio input. 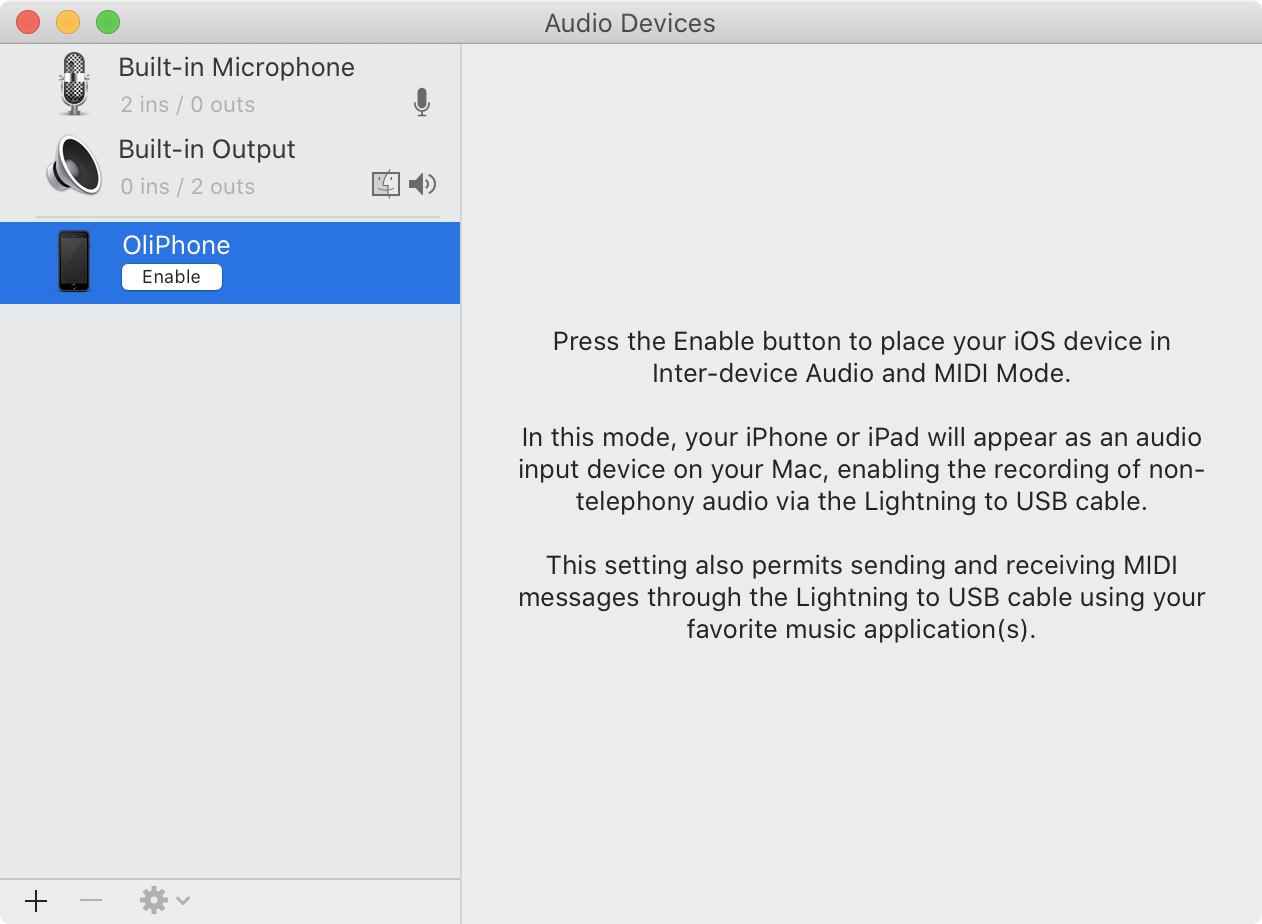 The iPhone will then appear as an audio-in device in macOS and can be used as an input in any Core Audio-based audio app. 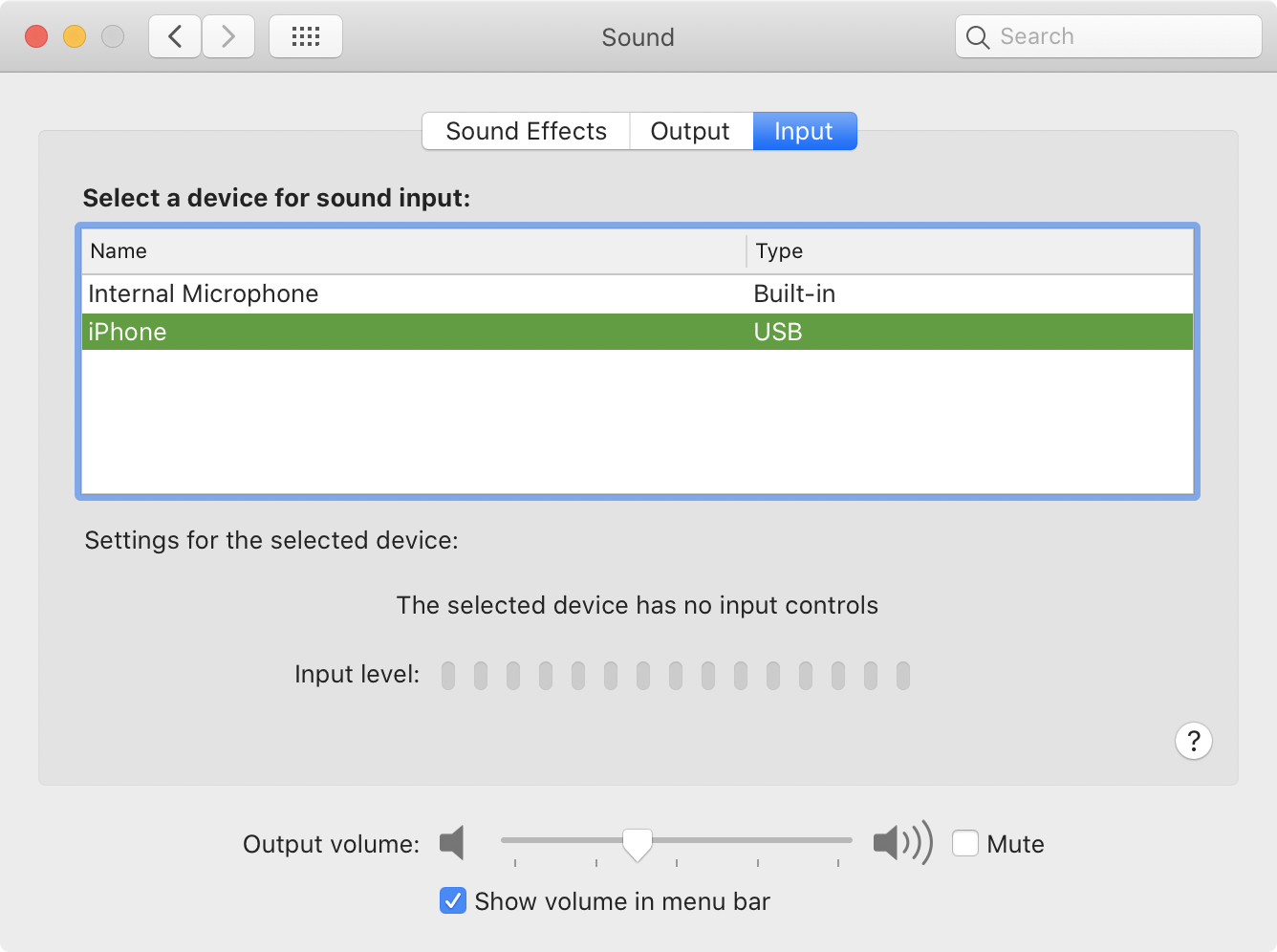 For playback of white or pink noise, you can use any iOS audio/video playback app. In YouTube, for instance, there are plenty of hour-long videos available with the respective noise audio tracks.

Not the answer you're looking for? Browse other questions tagged iphone ios audio .

1
How to do speaker correction on a MacBook Pro Retina

7
Can you solve these intermittent audio problems with Ford Sync and iPhone?
3
Is line level Bluetooth audio possible with iPhone?
0
iPhone 5 USB Audio
3
Do any iPhone 5 docking stations offer both audio out and a lightning connector for charging?
7
Is there a way to see the amp levels while charging my iPhone?
1
iPhone in iPod Mode in Car Switches to Different audio App Intermittently
7
How do I stop my iPhone from muting itself when plugged into a Toyota RAV4?