The release of iOS 14 adds Widgets on the Home Screen to iOS.

People have been using apps like Widgetsmith and Color Widgets to add customizable 3rd-party widgets and change the look of their entire iOS home screen.

However, the question everyone's asking is how to remove the widget name text from under the widget (as that "kills the vibe").

Can iOS 14 widgets be added to the iOS home screen without the app name / widget name underneath the widget? How can we hide the "Widgetsmith" label? 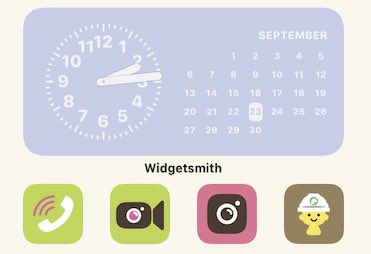 In response to the question:

Is there any possible way to remove the “Widgetsmith” title under the widget on the home screen? It ruins the vibe sometimes (twitter)

Unfortunately not. Apple requires that the app name be below every widget. (twitter)

So it appears that it is not currently possible to remove the name label text underneath an iOS home screen widget.

This is an iOS restriction, similar to all app icons (used to) have their app name under them. The widget app developers have no control over the matter, and cannot choose to hide their name.

You're gonna see the word "Widgetsmith" a lot:

You can send Product Feedback to Apple so that this is hopefully addressed in a future version of iOS.

Not the answer you're looking for? Browse other questions tagged ios customization widgets .