I work as a developer and exclusively use the keyboard for text selection and navigation. I have to switch between windows and OSX a lot.

Is there any way to make

particularly when it comes to text editing?

The differences hurt my productivity, because whenever I switch platform, my muscle memory kicks in and will use the wrong combinations on the other OS, which will lead to a wrong caret position at best, or - depending on the program - switched inapp-windows and/or other very undesired behavior which takes even more time to correct at worst.

I would prefer Version 1, because - while i can train my brain to swap, i am used to it more and also the windows-behavior seems "more" standard to me, since it is used on mainstream Linux Desktops as well.

(I am happy that the added shift key behaves consistently across platforms, performing selection instead of mere caret navigation)

I already swapped the Command-key with control globally in osx keyboard settings, to make behavior a bit more consistent (i.e, ctrl+s to save instead of command+s)

However when it comes to navigation between application, this breaks down, because:

Also it does not solve

A solution that also covers this would be even better :)

In short, you can't do it. You might get close employing such as Karabiner, Better Touch Tool, AutoHotKey etc, but you will never achieve 100%. You additionally have to fight that not only is Mac a paradigm shift from Windows, but that Terminal-type apps also have a separate set of rules.

TL:DR Learn the differences. Long-term it's better than trying to fight it.

One really good tip to help you learn the difference…
Don't try to use the same keyboard for both. Have a Mac keyboard & a PC keyboard.

Anecdotally, I've been working cross-platform for 20 years, prior to that I was Mac only.
I daily have to work with

The first two are easy, the last two are [comparitively] hard.

A comparison, if you ever drive abroad - it's much easier to drive a rental with the steering wheel on the correct side for the country you're in than it is to take your own car & be on the 'wrong' side of the road. As a Brit, this happens almost everywhere I travel, as we're in the minority in driving on the 'proper' side of the road :P

The best method I have found for tweaking hotkeys on Windows to be more like Mac is by using Windows PowerToys Keyboard Manager. It lets you easily remap keys on the keyboard to be very close to Mac-like in regards to text selection. It has the added ability to limit hotkeys to certain applications so it can be infinitely tweaked depending on what you are doing.

I have a Mac keyboard so my hotkeys are assuming that the windows key is to the right of the alt key on the keyboard. If you are using a Windows keyboard adjust the settings accordingly. 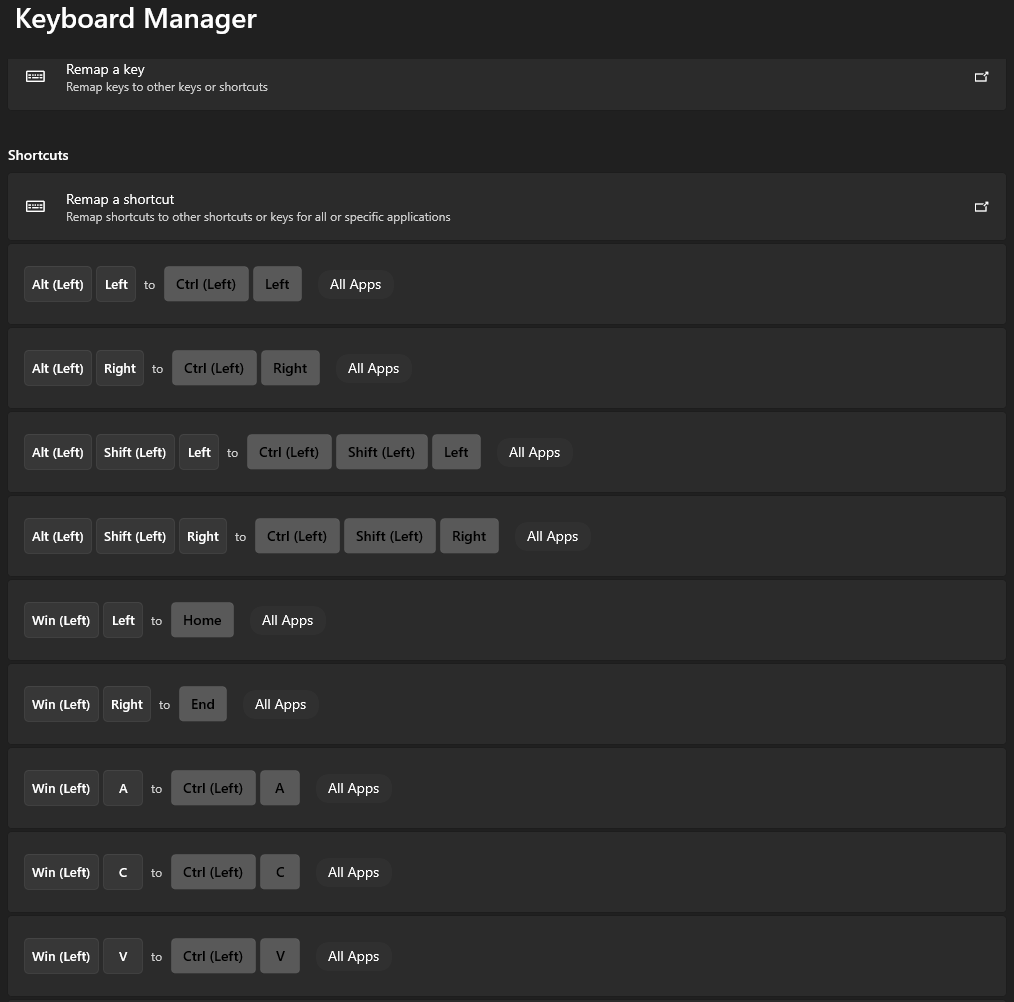 In order of the screenshot, the following shortcuts enable:

62
Scaling all UI elements when using an external monitor

0
How to move from text to text by keyboard in Powerpoint?
4
Are there keyboard shortcuts to move paragraphs up or down while editing text?
10
OSX: modifying text selection with ⌘⇧→ and ⌘⇧←
0
Option + arrow left/right moves window rather than moving caret
11
How can I make my Windows keyboard shortcuts work on a Mac, exactly how they do on Windows?
2
Missing text editing keyboard shortcut like windows while coding
10
Swap or remap Cmd+Tab to Ctrl+Tab
2
Home/End keys to simulate Windows behavior in different contexts
1
Where is the location of the file that stores Mac keyboard shortcuts?
0
Remapped Ctrl+V jumps to to new line in some apps, Ctrl+A moves cursor to the start of line (text areas)