I'm sending a bash script as a .command file to a friend. This person is not very tech savvy which is why I'm sending it in the first place, the goal is for the .command file to run through the shell operations for them. However when the attempt to run the script they get the run.command is damaged and can't be opened. You should move it to the Bin error. I believe this is a new version of the old unsigned developer prompt as apple is blocking out random code from their systems. Anyway I can have this run without too much complexity?

Edit: I'm open to using applescript if this will alleviate the issue.

Using Script Editor.app in /Applications/Utilities, you can save the AppleScript as a .applescript text file that will launch in Script Editor on the host computer.

The end user will need to select the menu item:

Alternatively, you can Export as an Application and code sign the resulting application. This assumes you have a code signing certificate available. 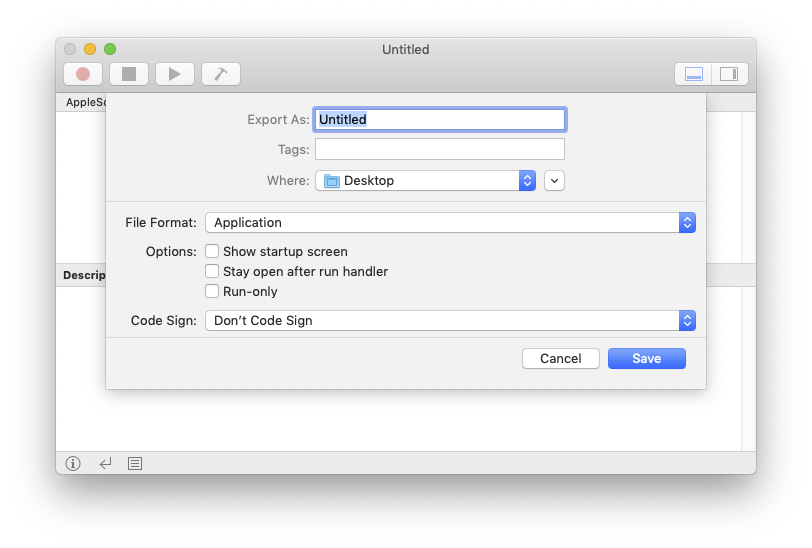 An Automator workflow can also include shell scripts and AppleScripts. Automator can also save as an application, with the Export… menu item also prompting to code sign the result for you.

Not the answer you're looking for? Browse other questions tagged terminal applescript bash automation code-signing .

3
Screencapture Terminal command and then return to Shell script
62
Run AppleScript from bash script
0
Issue with Automator and bash script
0
terminal -bash: command not found
1
Automator: “Run Shell Script” throws error because of missing “on” command
1
How to pass a file set as a variable from AppleScript to a Bash shell script
0
Bash script to back up files
3
Embedding AppleScript inside a Bash — getting Error
0
lots of errors after sudo bash in terminal