I'm having a rather strange issue. When I opened my 13-inch 2020 MacBook Pro, right out the box everything seemed rather small. I went into the display settings and noticed the display setting was set to the "default." However, poking a bit further into this, I saw that the "default" software resolution was being recognized as 1440x900, which corresponds to a 2880x1800 panel @2x. This happens to be the panel resolution of the 15-inch MacBook Pro. 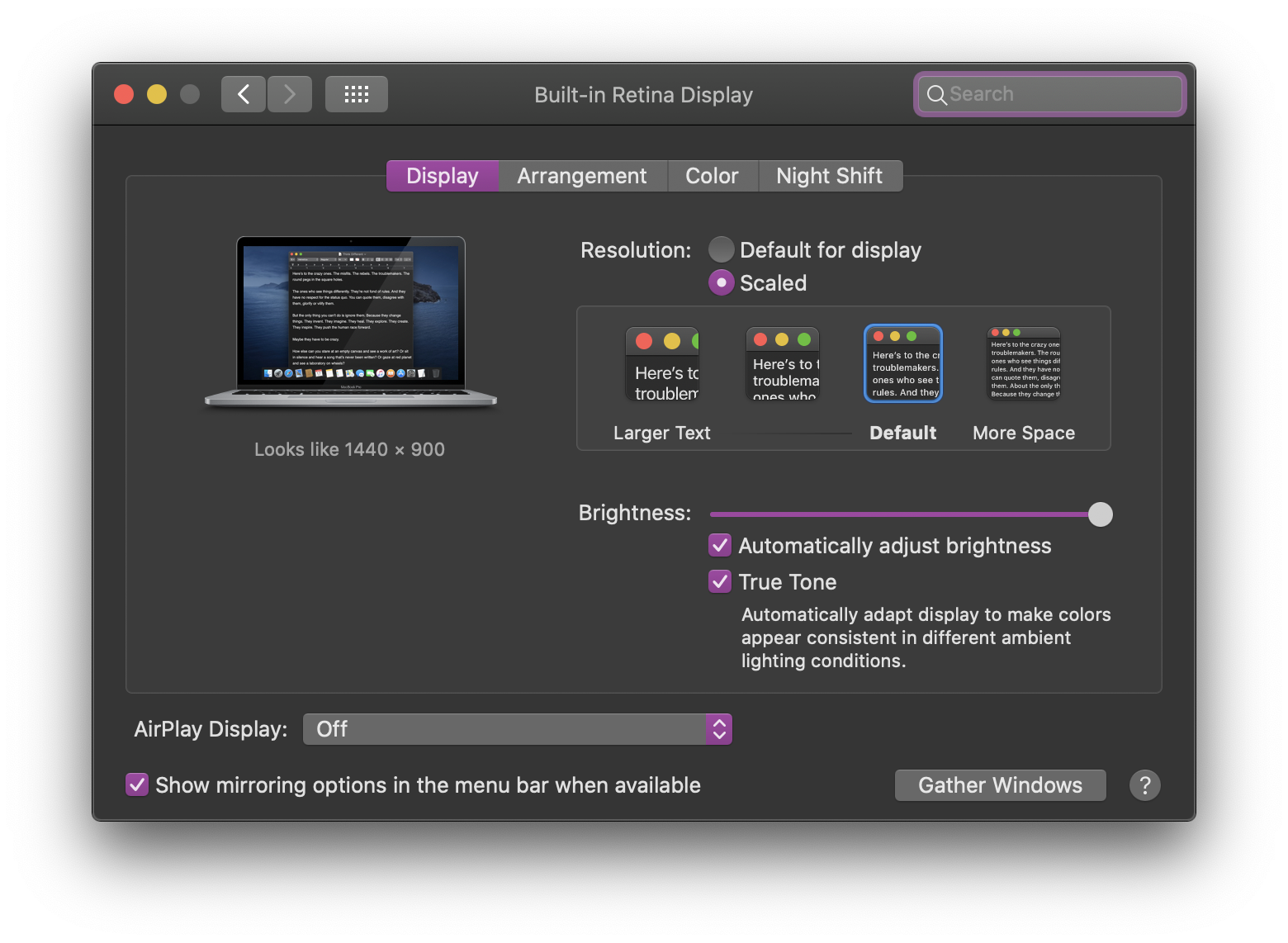 However, my MacBook is the 13-inch variant, which has a panel resolution of 2560x1600. The software resolution should as a result be displaying 1280x800 as default, as that's exactly half of the panel's 2560x1600 native resolution. 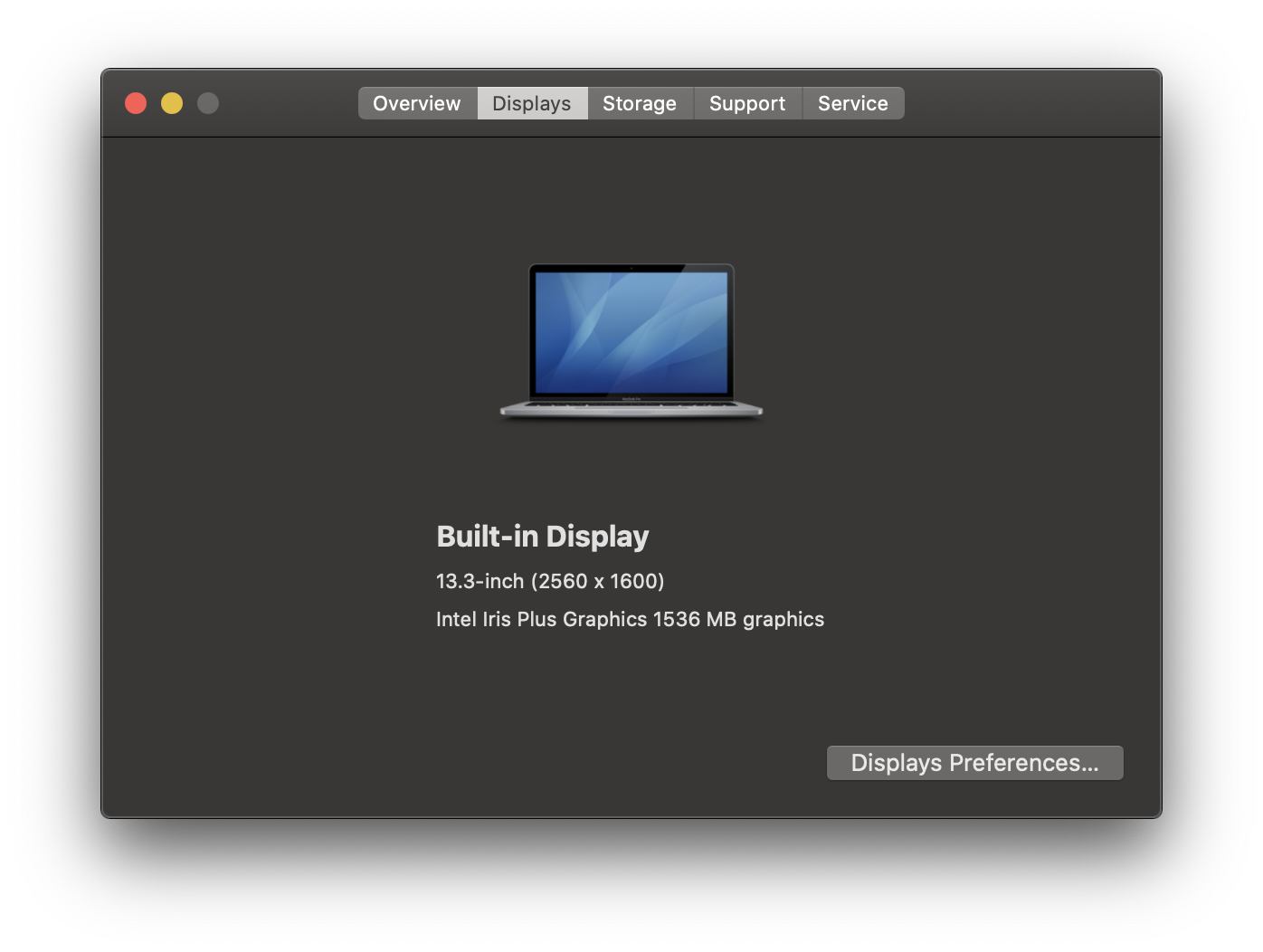 I checked on my late 2012 13" Retina MacBook Pro (which has the same resolution display panel resolution and size), and it correctly identifies the default software resolution as 1280x800.

I was having some display issues related to True Tone being intermittently enabled/disabled, so I called Apple Support. I brought up this issue and escalated it to a senior advisor. I tried to show these numbers to him, but he simply stated that the default is "scaled higher than the panel supports since customers complain about text being too small." Which seems to be the opposite of my issue, since everything appeared smaller than it should be.

I reset my NVRAM, but these issues still occur.

Is my display panel faulty, communicating to the OS that it's a 15-inch panel instead of a 13-inch one? Could this possibly be related to the True Tone issues that I'm having?

So it looks like all modern 13" MacBook Pros do this. It has been confirmed in this MacRumors thread.

I find it strange for this to be the default resolution, because it is a fractionally scaled resolution. This means that the virtual pixels do not map perfectly to physical pixels. If the default scaling was set to the second box, as with older 13" MacBooks, then a 1x1 block of virtual pixels would correspond exactly to a 2x2 block of physical pixels. With the new default scaling, this is not the case.

This leads to text which is slightly less sharp if you look at it up close. Why this change in default scaling was made, I don't know—perhaps Apple determined the loss in sharpness wasn't significant enough to discount it as a default option. Oh well, it's good to know anyway. At least my display isn't having an identity crisis.

Not the answer you're looking for? Browse other questions tagged macos macbook-pro display resolution .

7
Can I increase the resolution of a 13-inch MacBook Pro?
1
Does half-resolution on Retina displays really look the same as native?
3
Could you interpret these screen resolutions from Google Analytics?
0
No retina (best) display option
2
Does OS X scale the resolution of my screen?
4
Macbook Pro 2016 (15") has weird default Resolution
17
MacBook Pro display suddenly has a very faint warm/pink tint
10
Scaling external Display on Macbook Pro Mid 2012
0
External 4K display with 2012 MacBook Pro 15"
0
What is the default effective resolution of the Macbook Air 2020