I just bought macbook pro 16 and I get mild shock when charging and when I touch surface.

Is this to be expected or do I need to have it serviced?

You must try to determine if the charge that's causing the shock is a charge on the Macbook - or a charge on you! Static electricity can accumulate under a number of conditions. The shock you feel is due to the static discharge when current flows to equalize the potential difference.

If the static charge has accumulated on you, try this: "Discharge" yourself before touching the Macbook. You can generally do this by placing one or both of your hands on a wall, or the floor for 5-10 seconds before touching your Macbook.

Alternatively, if you are sitting still in a chair, touch your Macbook, and are shocked - wait 5-10 seconds, and touch your Macbook again. If your Macbook repeatedly shocks you while sitting motionless, then your Macbook is accumulating the charge. At this point, you should take it to an authorized Apple repair facility to have it checked.

If the charge is on you... maybe look into some removal and prevention measures 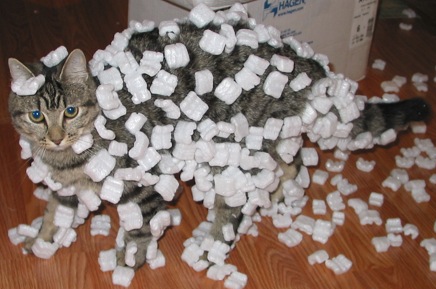 Yes, as bizarre as it sounds, the "mild electric shock" you describe is considered normal, and harmless, according to Apple. (I can't seem to find the article they posted, it may not be there anymore but you can read the safety information for the details.)

In some cases (usually with varying environment factors, e.g. for people with especially sweaty hands, unusual levels of voltage on their outlet ground, in dry weather; but also possibly when there is a defect in the power adapter) they get a full electric shock, like one would get when getting on a metal elevator after pulling a sweater over their heads and rubbing their back against a polyurethane painted wall — the ones you can see the "zap" even though the lights are on.

It's actually not isolated to Apple products, any appliance that has a metallic chassis tied to ground can do this if is powered by means of a switching power adapter plugged into an AC outlet with no ground. It's the difference between the "0VDC" that the adapter "defines" and the "ground" voltage that your body can serve as a path to.

I don't know how to explain easily how your body is "grounded", since you could be standing in rubber soled shoes on hardwood floor, but for empirical demonstrations, try out caressing your laptop (that's what I did absentmindedly to get the "buzzing" feeling on my palm) while sitting on a bed with a wooden frame/bedposts, while standing on tile, while standing on carpet, and most significantly, while you're actually electrically grounded at some point.

The easiest way to do this in an up-to-date electrical-code compliant building is to touch a outlet, or switch cover screw with one of your fingers.

If you consider this a problem that you would like a solution to, you can get a three-pronged (grounded) extension cord for your power adapter/charger, that Apple used to include with all portable Macs, but now you gotta shell out $19 for. IMO they should have come up with a three-prong plug before making the move to stop including the cord in machines with 4-digit price tags, but it is what it is. :(

I wouldn't recommend getting one from amazon or eBay, unless you can get the OEM cable Apple sells used for a lot cheaper or something (it's $20 bucks to ground your system worth hundreds of times more) I'd grumble and complain but pay up in the end, unfair as it is.

EDIT: To answer the question, it depends on what the source of the "shock" is, and how bad it is. If it is so severe it could be described as painful (as in, after a few dozen shocks you feel the urge to hurl the laptop away from you) then this is not expected. Whether it should be serviced is a harder one to guess at without the adapter in hand, but the test would be:

72
How can I avoid my MacBook Pro giving me minor shocks?

72
How can I avoid my MacBook Pro giving me minor shocks?
1
I'm in Peru and having battery problems and electric shock issues with my new MacBook Air
1
Overheating problem in MacBook Pro
2
Keyboard Touch Bar MacBook Pro late 2016
3
Macbook trackbar gives me electric shocks
1
MacBook Pro not loading although power adapter is connected
2
MacBook Pro not charging under heavy load
1
Macbook pro not turning on