I have an "old" MacBook Pro (MBP) that has a Mini-DisplayPort connector.

I have a newer MBP with 4 USB-C connectors that I use with an LG UltraFine 5K Monitor (aka. LG 27MD5KA-B).

I wanted to know if through an adapter, I could connect the old MBP from its Mini-DisplayPort to the USB-C of the monitor and have a video signal.

This Apple StackExchange question does not really answer my question because it is about USB-A to USB-C. This Apple KB (section System requirements and compatible Mac models, paragraphe before the last one) says no, but does not specify Mini-Display Port. Finally, the answer to this Apple StackExchange question says no but then says that "Thunderbolt is a protocol for combining PCI express data with DisplayPort video protocols" (this web page explains the differences and similarities between Thunderbolt 3 and USB-C) and then says "DisplayPort embedded over USB 3.1/Type-C".

I am therefore a bit confused: Mini-DisplayPort (a video protocol) uses a Thunderbolt connector and DisplayPort is embedded over USB 3-1/Type-C…

My question: What happens if I buy a cable like this and connect it between my old MBP and my LG UltraFine 5K Monitor? 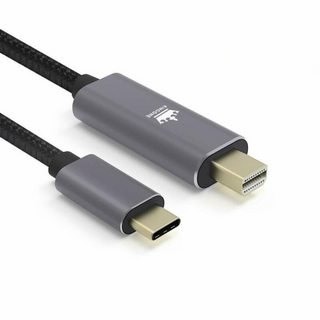 First, the monitor doesn’t have a DisplayPort input nor does it have a USB upstream port. It has a Thunderbolt 3 port that uses the USB Type C connector. The USB-C down stream ports are supplied by the Thunderbolt connection.

Secondly, even though TB is backward compatible, it’s one way. So, a laptop with a TB 3 port can work with a TB 1 or 2 device, but a TB 3 device can’t work with a TB 1/2 laptop port. The adapter can’t add capabilities to a machine that doesn’t already have.

I wanted to know if through an adapter, I could connect the old MBP from its Mini-DisplayPort to the USB-C of the monitor and have a video signal.

It's possible but unlikely.

DisplayPort cables like the example you gave are largely passive devices and so are bi-directional and don't need any drivers or such. They'll have a little electronic "tag" in the connector to tell the host and device it's plugged in, and that's about it for any electronics in the cable. The DisplayPort host and device will negotiate how many channels are available, resolutions available, and so forth. DisplayPort has had a lot of revisions over the years but it has kept backward and forward compatibility through those revisions.

What can be a problem is many of these high end displays are more like a multifunction dock than just a display. They may require USB and/or Thunderbolt to supply an image on the screen. It's often the case with displays like this will not be using DisplayPort for video but instead using video over Thunderbolt, which is apparently a thing.

Generally a USB-C display is possible to work with a mini-DP to USB-C passive cable but you'll get only video, and possibly sound if the display has speakers or an output for speakers. Any built-in camera, USB ports, hand dryers, and towel dispensers will not work. They will need the power and/or data channels that USB-C has but mini-DP does not.

It won't hurt to try the old computer and new display. You can buy the cable from a place with a good return policy or be prepared to "eat" the cost if it doesn't work. Even then the cable might come in handy in the future as I expect USB-C and mini-DP to be around for a while.

What if you were to try these two products:
https://www.amazon.com/Apple-Thunderbolt-USB-C-Adapter/dp/B01MQ26QIY https://www.apple.com/shop/product/MD862LL/A/apple-thunderbolt-cable-05-m ...the first one is bidirectional.

Not the answer you're looking for? Browse other questions tagged display usb thunderbolt displayport compatibility .