I have a frayed 60w MagSafe with outer insulation / coaxial part is broken where some wires are cut (some are not). There's no problem with inner insulation part and the MagSafe working just fine when plugged to my MBP (I seal up the broken part with electrical tape).

My question is, is it safe to use MagSafe with broken outer insulation (some wires are cutted out)? Will it damage my MBP especially the logicboard in long term? What the purpose of the outer insulation part?

Update : I have already sealed the cable when I created the post, so I will use image I found on the net to illustrate the situation. 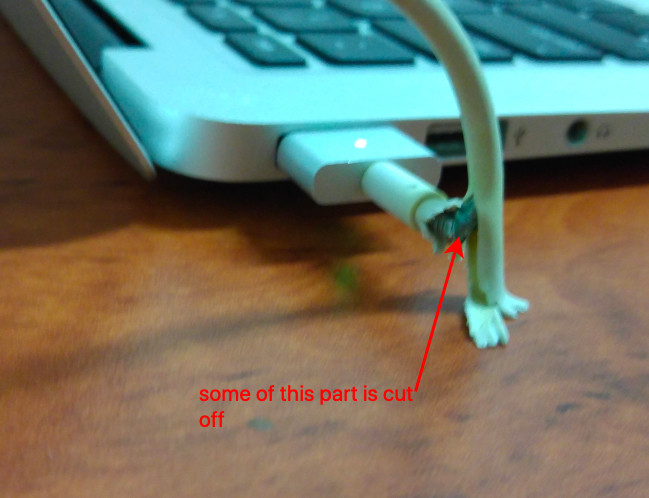 This is my magsafe look like after sealed by electrical tape 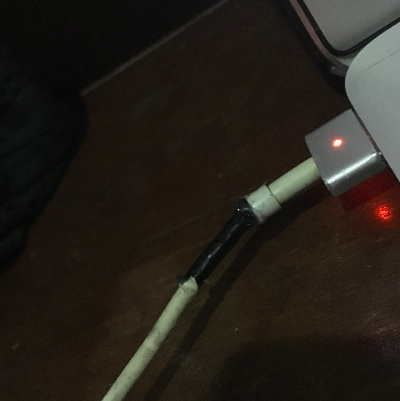 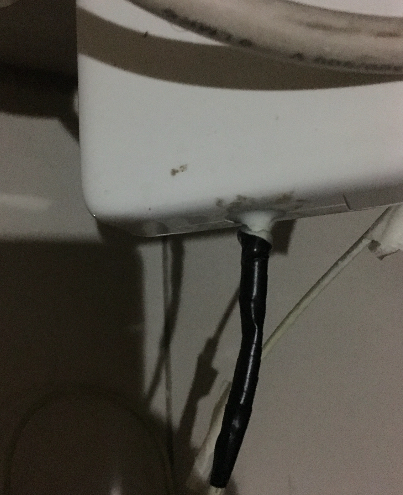 Will it damage the logic board?

No. The shielding is also the ground conductor. So, you need it for two reasons. If you cut it, you’ll be breaking the MacBook’s connection to ground which of course will affect it’s ability to function. It’s like disconnecting the negative battery terminal from your car or any other battery power source - it will fail to function.

Will the "cracked" wire of a MacBook charger eletrocute me

It’s not “dangerous” to you, but if you were to somehow send voltage down this line you could damage your charger and/or Mac. However, those vintage Mac laptops had a separate (replaceable) DC-in board that would take the brunt of any surge. If there was damage, it would be contained there.

I guess tha the "coaxial" part you refer to is actually just a shield. The shield is made from a fine wire that is "braided", and runs the length of the cable. I'm not privy to Apple's designs or schematics, but most likely the shield is there for EMC (electromagnetic compatibility), and not as a current-conducting ground wire. Using a shield as a conductor would be unusual to say the least.

That said, any damage to the shield is unlikely to affect the function of your cable.

However, the insulation on the wires in the cable should be checked for evidence of cracking, fraying or other deterioration. It's important all of the inner wires (inside the shield) are in good condition. You have done the right thing by mending the cable with electrical tape: it's an insulator and it's flexible. As long as the electrical tape is in place, and in good condition, I don't believe the cable poses any risk to you, or to your Mac.

I had the same problem as you recently on my Magsafe cable. The outer insulation in one area on the cable just began breaking down, and falling off the cable! I've never seen wiring insulation behave like this. I also used electrical tape as a temporary solution. I was able to find this replacement Magsafe cable on Amazon. This cable allows me to use one of the new USB-C chargers to charge my 2011 Macbook Pro. I've been using it for several months now & it works.

It appears from the picture you have the newer Magsafe 2 connector.. Consequently, the cable I bought will not work for you. However, it seems they also have a version for the USB-C to Magsafe 2 cable which may suit your situation.

Not the answer you're looking for? Browse other questions tagged macbook-pro magsafe .

4
Will the "cracked" wire of a MacBook charger eletrocute me

4
MacBook Pro won't power on after SMC reset
3
Out of warranty MBP ,Burned Magsafe port and frayed charger cable - repair option and cost?
1
What are specs of this MagSafe wire, and what is its purpose?
3
How safe is it to replace the magsafe 2 connector with another one by simply connecting the wires?
2
Burned magsafe dc in board ports: Replace, even if working?
1
Are frayed cables of Apple lightning cord or Macbook Power Adapter covered by warranty?
0
How to cope with MagSafe "withdrawal"?
3
Should I replace my Macbook battery, charger, or both after 5+ years of use?