I cannot install 10.15.5 it just restart and still says I haven’t installed

Just now it wasn't showing the purgeable but now it is after my successful update. 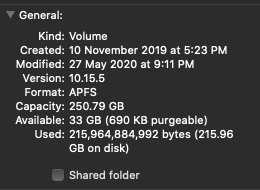 This time it worked

I had a similar issue and discovered that the problem was down to disk space. After various fruitless attempts at restarting and hoping for the install to happen, I decided to try installing manually and downloaded the update. I ran the installer and got an error message telling me I didn't have enough disk space. This was odd as I had about 15Gb, which I thought would be enough.

After clearing out some old files I eventually got to 28Gb free and tried to install the update again. It still failed with the message that there wasn't enough disk space. Using the DaisyDisk utility I looked at how much disk space I had and noticed that of the 28Gb that was free, only 10Gb was really free and the other 18Gb was purgeable. My guess is that the Installer program only checks truly free space and given that the actual update itself is around 9Gb, it probably decided that there wasn't enough space to do an install.

So I used the DaisyDisk utility to do a proper purge of the purgeable space i.e. truly cleaning the files in it off the disk. I now had 28Gb of genuine free space and the install proceeded without a hitch. If the install keeps failing using the Software Update approach, it may be an idea to try a manual install as that seems to at least give you an error message to work with.

1
RE: Can't install BASH patch: OSX 10.9.5 update installed, but system still says it is 10.9.4-Still need help
0
Stuck in update boot (not enough disk space)
8
Missing disk space on macOS
1
How can I free up space to reinstall macOS (Catalina)?