How do I add new pronunciations to apple dictation?

I am a mathematician, and I am also dyslexic. I am trying to use the dictation software (not voice over) on my MacBook pro to write documents. I want to teach it certain pronunciations of words for example 'Lie' in 'Lie algebra' is not pronounced as it is written but differently. Given I have a speech impediment associated with my dyslexic I don't pronounce 'th' properly (and a bunch of other things), so every time I say 'theory' it writes 'fairy'.

Here are some other examples that which it consistently gets wrong for me: "is" always writes "it's", "the" always writes "there". You can imagine how annoying this gets!

I'm worried it is in a positive feedback loop. That every time I say "the" and it writes "there" it thinks that is more likely the correct thing to do, so does it more often etc. I don't know how/if I can formally correct it so that the algorithm knows it got it wrong.

Thus my question is: Is there a way to teach apples dictation software the correct pronunciation/my pronunciation of words? If not are there any alternatives I could use.

(p.s. The original version of this question asked how to add new words as-well as pronunciations - a recent update seems to have sorted this)

I don't think that there is anything that is adjustable for Apple's dictation. I assume that you could use Text Replacements, but I don't think they are interactively called when dictating.

My kids are dyslexic as well. I have used the text to speak to help them with their papers. I tell them to just their their thoughts out onto paper before going back and fixing any little issues that have come up from the dictation. It's also a way for them to proofread their work to make sure they make sense.

Mastering Dictation and Voice Control takes time. Some of the things to consider while dictating documents are:

All of those items, in one way or another, will impact your dictation accuracy. In a lot of ways, it’s a game of finesse.

While using Voice Control, simply speak the phrase ”Show Commands”. If you happen to be working in a document with text when you speak that phrase, the Voice Commands window should display all of the different text related Voice Commands for editing, navigating, and working with text.

One of my suggestions would be to take 20 or 30 minutes and play around with those Voice Commands in a text based document to get the hang of things. It won’t happen overnight but in time, you’ll start memorizing the voice commands and they will become second nature to you.

You are already starting to notice that Dictation can be stubborn at times. You mentioned…

every time I say 'theory' it writes 'fairy’

These are the steps I would take to fix that problem if I had that same issue. Let’s assume that no matter how many different ways I have tried to pronounce ‘theory’, Dictation just won’t get it right. I decided to select the word ‘fairy’, after it was inserted by Dictation, and I spoke the phrase “Make This Speakable” at which point this following window opened… 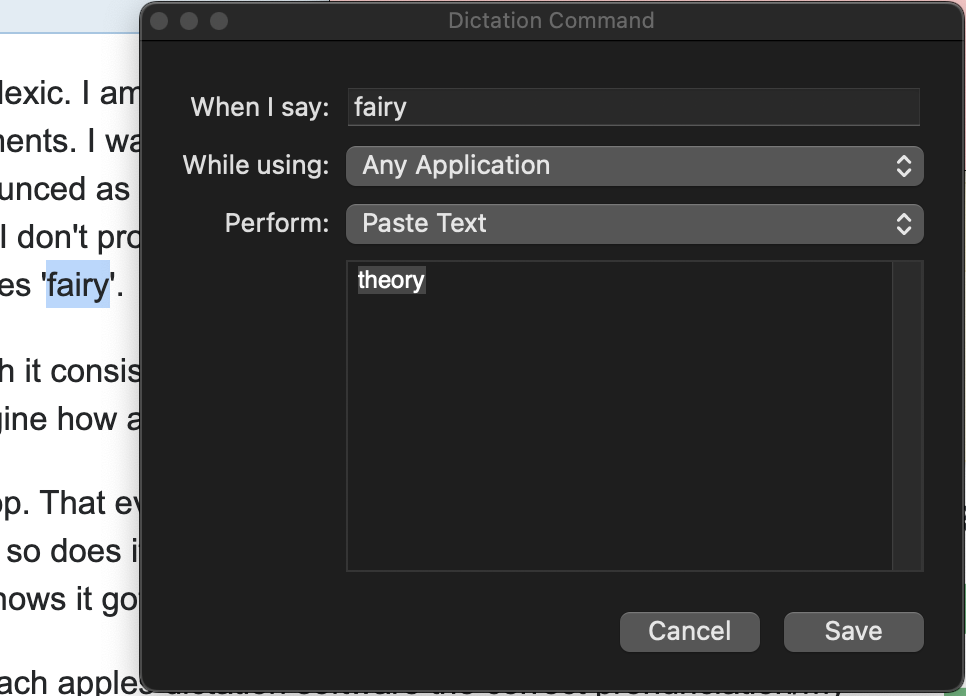 Not the answer you're looking for? Browse other questions tagged voice-dictation .

3
How to correct spelling in Dictation on new iPad (3rd generation)
2
Does Voice Dictation on the New iPad require a network connection?
3
Can the new iPad record dictation while recording audio?
7
How to increase the Apple Dictation timeout?
13
How to turn off the dictation beep?
5
Mac Dictation - How to select backspace?
0
Does enabling Enhanced Dictation in Mac dictation improve the speech recognition accuracy?
1
How to get Dictation to get audio feed?
1
iOS dictation duplicated