How do I make my Favorites icons fit their squares?

Here's a pic of what I'm talking about.

I already know how to change the icons (by going to ~/Library/Safari/Touch Icons Cache/Images/ then replacing them with the same named .png) but some of them don't fit perfectly like the Facebook, Twitter, or "Day 1 Advent of Code" icon does. Btw, I'm not so bothered about the Reddit icon not fitting since it's not a square so please ignore that. Is there any way to solve this?

I already tried resizing but it stayed the same. Let me be clear that I'm doing this because I don't want any plain letters in my Favorites (such as the "U" you'll see in the pic). I also checked the sizes of those icons who fit perfectly, and some were even smaller than the ones that do not occupy the entire square!

The sizes were all at least 144x144 px. From there I tried scaling up and it didn't work. The files were .png format. I also did not change the file names.

I hope someone can help me customize this.

If these are png files you can open them in Preview and adjust the size. Try to keep the proportions the same when you do this. In Preview there is a menu item Tools. Click on the and you'll see Change Size as an option. Click on that and it'll bring up the panel shown below. 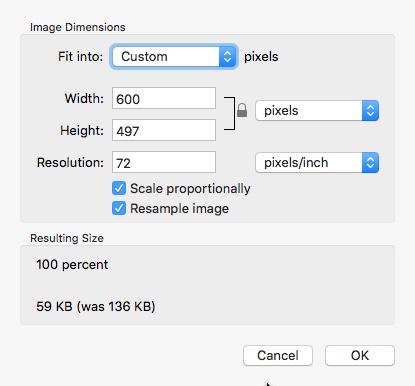 On this panel, you can make your image any size you want. I think the icons are square so you can set them as 64x64 for example.

Not the answer you're looking for? Browse other questions tagged safari catalina icon library .

5
Yet Another Custom Sidebar Icon Question (System Info.plist Question)
0
How could I set apple icon image (xxx.icns) to file or folder?
10
How to get custom favorites icons in Safari 8 on Yosemite?
2
Missing icons in Safari Favorites tab (OS X Yosemite)
1
Finder favorites bar icons not showing
1
how to draw good safari button icons?
14
How to get icons in Safari favorites (aka favicons) to display correctly?
2
Can't change APFS external drive icons