Creating a static route through a specific interface

My problem involves a High Sierra Mac Pro, a NAS and an old house. Things are like this: Mac Pro and NAS sit close together, and are connected via bonded Ethernet through a switch allowing for ultra-fast transfer speed between the two.

Being in an old house, the switch itself is connected to the main router only via a PowerLine interface. While this actually brings web surfing to the Mac Pro's Ethernet, the truth is that for this purpose only WiFi is way faster (about 10x).

I tried moving Ethernet on top of service order stack and removing its IPV4 Gateway, but my Mac still keeps connecting to the NAS via WiFi even though Ethernet comes first.

I understand I would need some kind of static route to do this, but after reading a lot of (contradictory) posts I'm still not sure how to exactly accomplish this...

Can someone help me? What sort of code should I type in Terminal to create this static route and make sure it's still there after reboot?

I tried moving Ethernet on top of service order stack and removing its IPV4 Gateway, but my Mac still keeps connecting to the NAS via WiFi even though Ethernet comes first.

Service order priority is great for different networks (i.e. home and work via VPN or work network and lab network). If you're multi-homing to the same network (WiFi and Ethernet both connect to home), the priority doesn't matter. Routes are determined by what gets advertised first, the least amount of latency, etc. As you said, your WiFi is about 10x faster; it makes sense that the traffic will try to go through what it thinks is the fastest.

Set a static route for the host

You can set a static route for an individual host and ensure that all traffic bound for that host goes through a particular interface (gateway). The route command takes the following syntax:

All traffic would be to that one host (NAS) would be routed though the bonded interface while everything else would go through WiFi.

The problem with this is that it's only temporary. You'll need to rerun this command every time you boot and quite possibly can get overridden (see next section). To automate it, you'll need to put this into a script (call it setroute.sh for example) and have it executed with launchd. See the following posts on how to accomplish this:

This is my preferred solution because the NAS will be on it's own network isolated from the rest of the traffic by default. You won't have to tell it where to go or what traffic to prioritize because it will already know that. In addition RIP (Route Information Protocol) advertising packets can't override any static routes you may have put in. Yes, your router can tell your Mac how to get to hosts automatically and this may conflict with what you want. 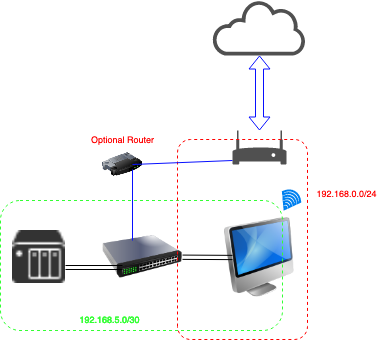 So, on your Mac, you'll have two network connections: 192.168.0.2 (WiFi) and 192.168.5.2 (Bonded Connection) to the switch (or directly to the NAS). The NAS, 192.168.5.3, will have it's connection to the same Ethernet switch that your Mac is connected to. All traffic destined for the NAS will have no choice but to go through the bonded Ethernet while all other traffic will go via WiFi.

TL;DR: if your static route doesn't work, but you have Wifi+Ethernet on your Mac, and 2 Ethernet ports on your NAS, you can configure one port on the NAS and the Ethernet port of your Mac to be on a different subnet than your wifi/router one (192.168.100.x vs 192.168.0.x: it doesn't really matter as long as they're different). The second port of your NAS can still be connected to the router via DHCP, to ensure remote sync processes keep working.

Ok everyone, this is for future reference for people in my same situation (a Mac with at least one Ethernet port and WiFi + a NAS with two ethernet ports).

One way you could accomplish the task of routing all traffic towards the NAS through one specific interface (in my case, Ethernet) and all the rest through WiFi could be as follows:

Link your Mac to your NAS via a cable (or through a switch), and let's set the NAS this way: (remember that for this to work the NAS has to have two Ethernet ports, not one)

YMMV depending on your NAS, or on your Mac's OS, but as far as I'm concerned I can testify that now on my MacOs 10.13.6 all "standard" traffic is correctly routed through WiFi, while the NAS (and the NAS only) is receiving full-speed traffic directly from the Ethernet connection.

This trick has one "downside", in that it will project not one but two NAS instances on the network (one is 192.168.0.x, the other 192.168.100.x), so obviously you'll have to make sure that you instruct your Finder to see the "correct" (Ethernet) NAS. If you keep addressing the other IP, its traffic will still be routed through WiFi. As to the management console (usually reachable via web browser), it will keep working flawlessly on both addresses.

This is only one possible solution. The other route (no pun intended), via script + static route, would possibly be more elegant and streamlined, but it requires some scripting and it's seemingly harder to achieve. I'll post it anyway as soon as I'll get it to work.

Not the answer you're looking for? Browse other questions tagged network wifi high-sierra ethernet nas .

12
How do I create a static permanent ifconfig alias?
7
launchd plist format for running a command at a specific time on a weekday
2
How do I run an app using launchd at regular intervals?

20
How to use WiFi and Ethernet at the same time
4
If I connect an Ethernet cable, will my Mac automatically select the fastest route for local network traffic?
1
Connect NAS with static ip over ethernet with MBP
0
Route command to use wildcard
2
Forcing macOS Sierra L2TP client to use specific interface
2
Problem with creating hotspot on macOS
4
How to use WiFi for everything, except a specific connection to my NAS (Ethernet)
1
Network interface fallback?