Retina iMac not powering up after upgrades, one diagnostic LED

I did a few upgrades to a 2017 iMac, and unfortunately, upon reassembly, it isn't powering on. Here's a photo of it, display disconnected. In the second photo I've labelled things for reference. 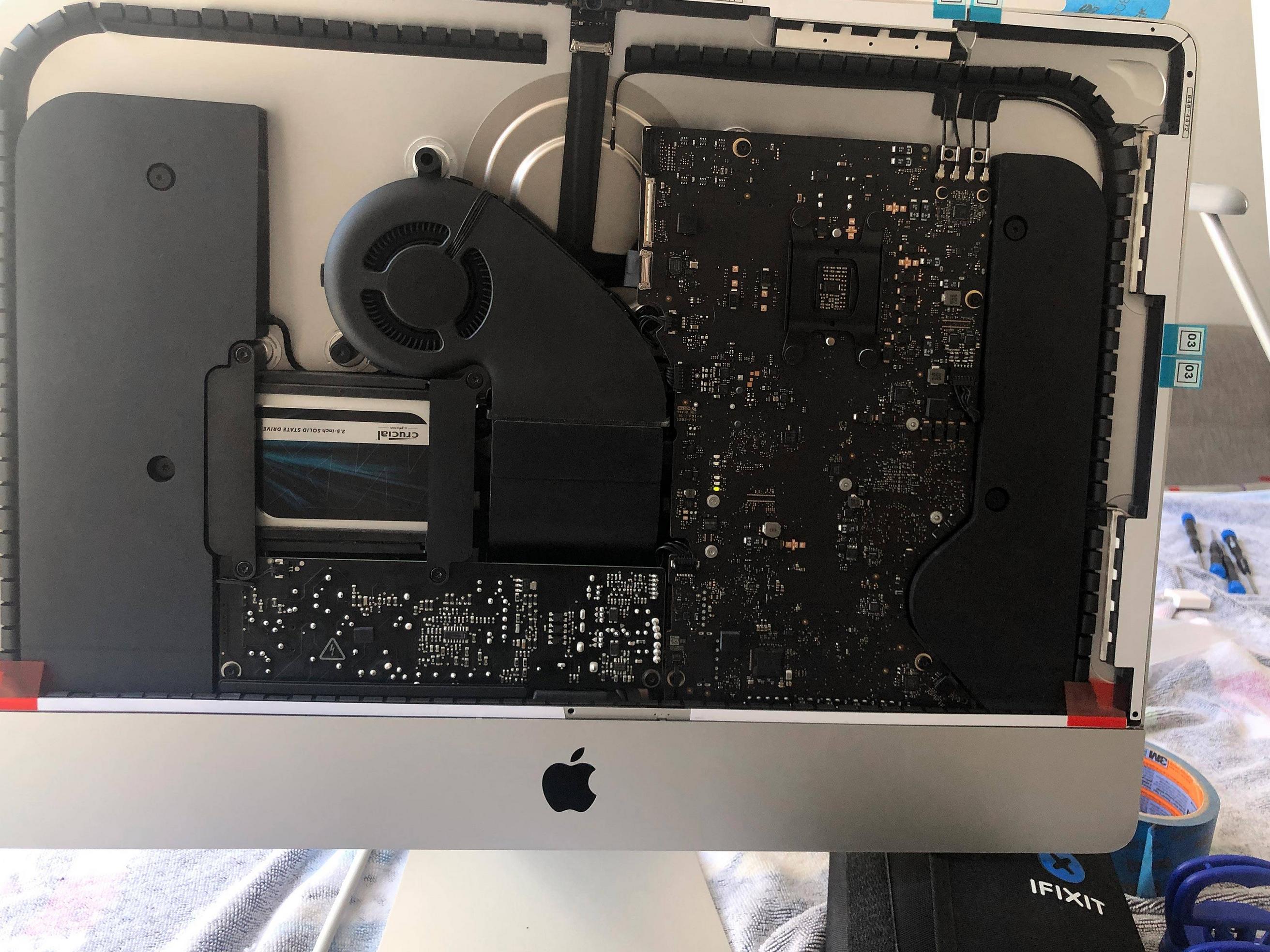 Things that could have gone wrong

Normally these sorts of small potential mishaps don't matter to much in my experience. I accidentally touch an exposed pin? No problem, clean it with isopropyl and carry on. But here something clearly went wrong (a first for me), so I'm really second guessing everything.

I don't have any thermal paste, but I ordered some quality stuff (two different kinds, a thick one and a CPU paste) just in case I now need it.

These new machines aren't easy to work with, everything has to be taken out just to get to the RAM and CPU, so I'm trying to diagnose as much as I can before going back in.

Based on these 6 potential issues, and the diagnostic lights, which seem the most likely? What should I prioritize exploring in the interest of time?

I'm really nervous about the thermal paste replacement, mostly because I've never used one of those graphite pads before.

Graphite pads, rather than using paste, wouldn't cause an issue. You didn't place the pad between the pins and CPU, I assume.

Although I looked at the iFixit tutorial beforehand, one of the things I didn't realize was that removing the heat sink from the CPU would also remove it from the GPU and its 4 VRAM chips. These 5 chips had a thick thermal paste (like K5-PRO) on them. I didn't reapply any additional paste when I closed them back up. I think this is normally okay, but now I'm not so confident.

The heatsink is one unit, yes - so removing it from one removes it from all of them. This should not have caused an issue. You're right that not re-applying thermal paste shouldn't cause the computer to abjectly not boot. It may cause issues with heat dissipation, for example, later down the track, and I would advise reapplying thermal paste before you put the screen back on, but it wouldn't cause issues right now.

For a brief moment the CPU fell (was stuck to the heat sink), and landed on the aluminum chassis of the iMac from a height of maybe 15cm (6"). I cleaned both sides with alcohol, inspected it. Seemed fine. Aligned it and put it in the CPU socket and continued.

A concern, but not a likely one.

I was really careful with the power supply and made sure that all connectors were fully in place.

It's receiving power? It isn't the PSU. If it was the PSU, you'd have no power.

The RAM was the right type, pins aligned and all. But the second chip didn't quite fit in snuggly. I really felt like I had to jam it, and still, the bevel in the corner of the chip was not perfectly flush with the groove on the outline of the RAM socket. It was really close though.

Remove it, and try to boot. I would bet on it being a RAM issue.

Not the answer you're looking for? Browse other questions tagged imac hardware gpu cpu apple-diagnostics .

17
How much GPU memory do iPhones and iPads have?
2
Macbook Pro 15 mid 2012 - not able to solve overheating
4
iMac slow and unresponsive after Mavericks
13
How do I disable/configure macOS Sierra's auto throttling of the CPU for processor intensive tasks
7
CPU stuck at 0.8Ghz on iMac late 2013 2.7Ghz because of kernel_task
1
Replaced CPU with i7, now 1 LED blinking
1
iMac mid 2011 T2 secondary heatsink heating up
0
My Mac 3,1 isn't recognizing one CPU - Dual Xeon