I'm trying to set up an Automator script to do a bunch of routine things before I pull my laptop off it's thunderbolt dock - turn WiFi back on, eject disks, and quit certain applications. It's this last one that's currently vexing me - using either AppleScript or the Automator "Quit Application" action, the script stops after executing the quit order. The app I'm currently trying to quit is MakeMKV. I've also tried it with Zoom (another app I'd like to close out).

It only stops if it actually has to quit the app - and the apps do quit. If the app isn't open, the step is skipped and moved past. The error I get is:

I've tried it with Chrome, Messages, and Notes, all of which quit gracefully. These other apps are executing the quit order - is there any way to figure out why the script is stopping, and suppress whatever is doing it? 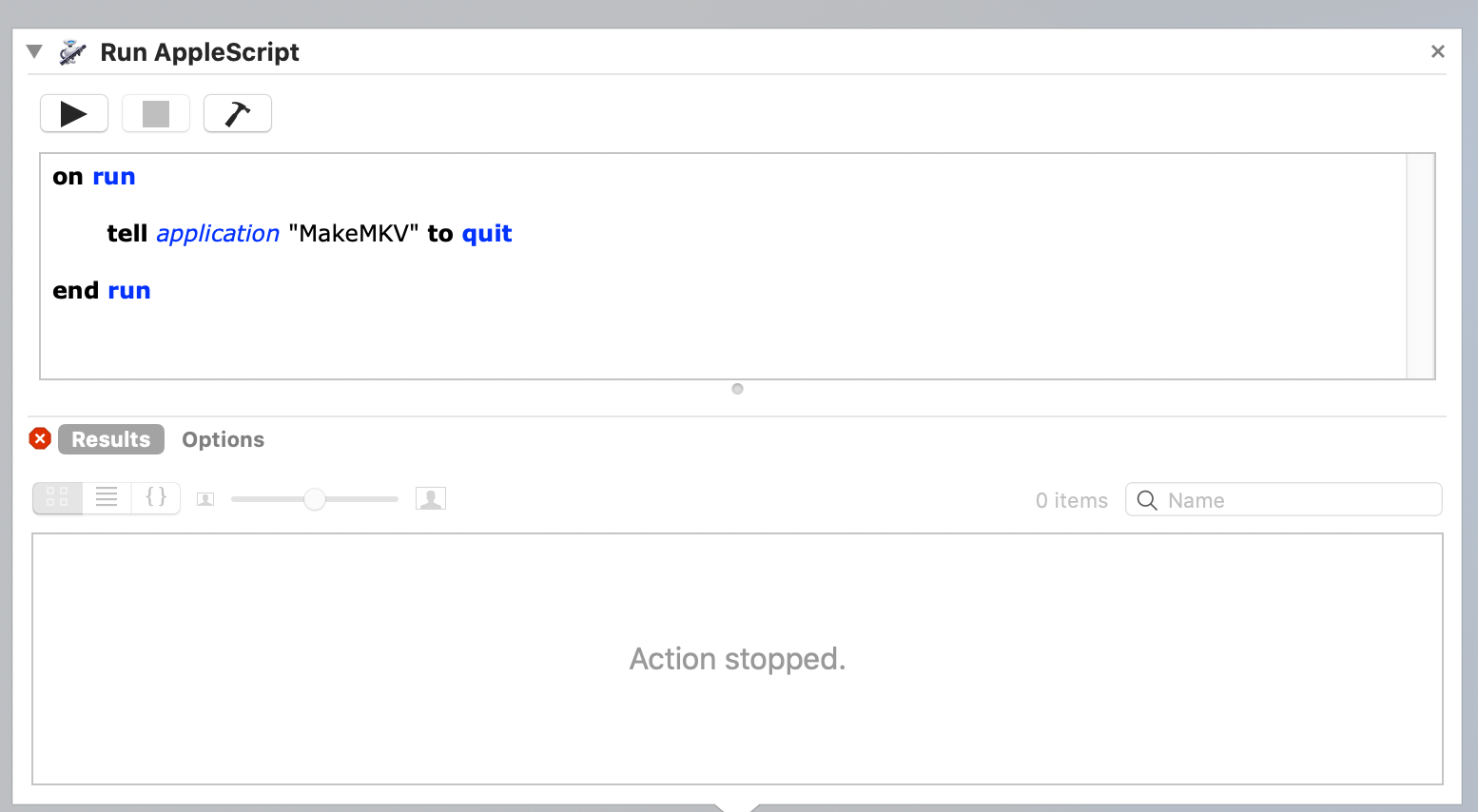 You can try these three potential solutions to see if either fare any better than the built-in Automator action.

The first is a plain AppleScript handler that takes a list of exceptions (apps that are exempt from being quit), and then proceeds to send a quit command to all the others (they being any application process not belonging to a file in the /System directory--therefore, Finder and System Events will be spared, but Automator will not unless it is specified in the list of exceptions, X):

The second uses the same method as above to retrieve a list of running applications but it grabs their pid numbers. These are passed en masse to a do shell script call to kill the applications (some people get nervous about this, possibly because the name of the command sounds like it's a bad action to perform, but it's perfectly safe, and very standard. Applications typically also save their window and document states, so the kill command can allow them to retrieve the .savedState data when re-opened later.

The last solution is an AppleScript-ObjectiveC handler that, once again, obtains a list of the running applications that aren't located anywhere in the /System folder, and don't appear (by name) in the list that's passed to the handler:

I haven't tested this handler to see what permissions need granting, as I didn't want all of my programs to terminate. But let me know if there are any hiccups and I'll direct you accordingly. The word terminate inside the handler can be replaced by forceTerminate (case sensitive) to do a force quit on each application instead. This, if it were me, would actually be my preference, as I have set my system to save the state of applications on forced terminations, and it avoids the "Do you want to save the current document?" banality.

Not the answer you're looking for? Browse other questions tagged applescript catalina automator .

1
How do I determine which application launched automator service?
1
How to quit "Force Quit Applications" using AppleScript?
2
How to make Automator insert "AW" into a Stickies Note
4
Can I create an Automator application to start Tomcat when I need?
2
Applescripting Numbers to save, close and quit in an App instead of the Script Editor
2
Automator action to run python script on series of files fails in Catalina
3
How to grant Screen Recording permission to an Automator Quick Action