dual-boot (ElCapitan and Mojave) on a Mac Pro 5,1?

I have a 2012 Mac Pro 5,1, running El Capitan. I wish to make it a dual-boot system, El Capitan and Mojave. I understand that I must install High Sierra preliminary to Mojave, and must install a "metal"-capable graphics card (I've purchased, but not yet installed, a Sapphire PULSE Radeon RX 580).

I have my El Capitan system on a 240GB SSD; user directories are on a separate HDD. I've created a 2nd partition on the SSD and done a clean install of High Sierra there. The installer made it an APFS volume, so when I am booted into El Capitan, I cannot select High Sierra as my Startup Disk (El Capitan cannot "see" the APFS volume in System Prefs). I can select High Sierra using the Startup Manager (⌥ Option during startup). But my understanding is that once I install the new GPU (prior to upgrading to Mojave) that the Startup Manager will not work (no boot screen) Thus, once I boot into El Capitan, there is no way to then boot into High Sierra.

Is it possible to resolve this? I've read that it's possible to install High Sierra on an HFS+ partition, but not Mojave. Perhaps I can live with High Sierra and Mojave as my two boot options instead, if I can get my older apps to work on High Sierra? But even then, without a boot screen, it's impossible to get to recovery disks etc (what happens if the boot drive fails?). Is the only option to obtain a GPU that supports the boot screen? Apparently macvidcards.com sell such cards and could modify mine, but they appear very sketchy, from searches I've done.

EDIT: This post may partially be a wild-goose chase - my apologies. I've determined I can probably run all my apps under High Sierra (and possibly under Mojave) - I was mistaken/confused originally - so it's looking like I may not need to boot ElCap anymore. But there may be other users who do need to, so I still think it's a discussion worth having. However, the boot-screen issue remains - in particular being able to boot from recovery partitions or external media.

One possible solution is to install rEFInd Boot Manager. This is free software which can be configured many different ways. Below is a suggested configuration.

By default, rEFInd installs in the EFI partition. You can then configure rEFInd to either boot El Capitan or Mojave. The default operating system to boot can be set directly from the operating system. There is simple AppleScript application you can download which will do this. As example of the application is shown below. 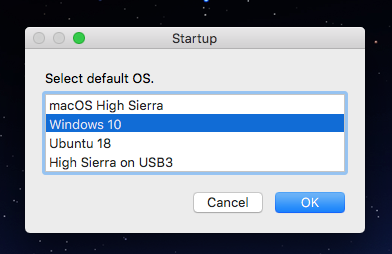 Not the answer you're looking for? Browse other questions tagged mojave dual-boot .

1
I erased an APFS Volume containing a second OSX installation (trying out Mojave) but my Mac keeps trying to boot into it
2
Unable to boot into Mac OSX after updating dual-boot Ubuntu, Partition Type FFFFFFFF-FFFF-FFFF-FFFF-FFFFFFFFFFFF
2
Change from Mac OS Extended File to APFS in order to install Mojave
5
Why does Refind break when upgrading from Mac OS High Sierra (HFS) to Mojave (APFS) on NVMexpress Macs?
1
MacBook Pro (13-inch, 2017, Two Thunderbolt 3 ports) running Mojave (10.14.3 (18D42)) is does not recognize external boot drive