All my Apple devices are fairly new and apart from Lightning cables, all my peripherals are now USB-C.

But for photo editing I still like to use my 2015 27" iMac that was heavily upgraded. Now this iMac only has two Thunderbolt 2 ports and, obviously, no USB-C ports. I would like to add a hub to my iMac that allows me to use USB-C devices, like hard drives that are mostly just USB 2 or USB 3 anyway. A single USB-C port would be enough. At the moment I keep a spare set of USB-A to whatever cables around but it's getting increasingly annoying.

Is there a Thunderbolt 2 dock that would have a USB-C port or a way for me to use something like Satechis USB-C hub on my Thunderbolt 2 iMac? It does not need to be a Thunderbolt 3 port or support PD, all of which would require an active component. 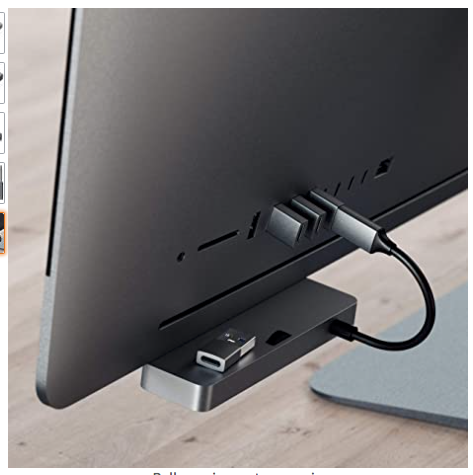 Specical thanks to MacGuffin for pointing out this adaptor. I would not have found this answer without such assistance.

Note: MacGuffin also added the following to this answer.

As there are no such adapters with the proper chip in them there is no simple and cheap solution. You would be best advised to deal with what you have or find a Thunderbolt to USB-C dock, hub, or breakout box. Choices on this are slim and run over $100 in cost.

Any inexpensive adapters for connecting USB-C client devices into USB-A hosts will be passive, and an active adapter is needed. As the USB-IF group did not define how to construct such an active adapter a separate USB controller must be used.

The adapter recommended by David Anderson has been reported as a fire hazard in the Amazon reviews. https://www.amazon.com/Satechi-Type-Type-C-Adapter-Converter/product-reviews/B07KCL8WZK/ref=cm_cr_getr_d_paging_btm_prev_2?ie=UTF8&reviewerType=all_reviews&pageNumber=2

This is an adapter that the USB-IF group declares "potentially unsafe" and "invalid" (whatever that means, nonfunctional maybe?). Do not use this.

There is no cheap and easy way to add USB-C ports to a computer that lacks PCIe slots. This is especially tricky if you want DisplayPort (DP) video to be retained on the USB-C port.

I have heard of people using a Thunderbolt 3 (TB3) dock with a Thunderbolt 2 (TB2) adapter to get working USB-C ports. The connection to the computer is a combination TB2/DP signal through an adapter and cable to a TB3/DP port. The TB2/TB3 adapter from Apple does not support DP so that will not make it through. It appears that every TB3 dock has a USB 3.x controller and so even though the intended market for these docks would be using USB-C/TB3 ports that support USB 3.x they don't use that capability, instead using only Thunderbolt and DP signaling. If the DP feature is not a concern then any USB-C/TB3 dock should provide the desired USB-C ports, as well as USB-A, audio, Ethernet, SD card readers, or whatever, just no video.

Another option is an eGPU. Like a Thunderbolt dock they often have a USB 3.x controller and a downstream USB-C port. No issue of lacking video as it has it's own GPU for that.

Another option is a PCIe breakout box. Some provide only an upstream port and a slot for a single card. Some have more circuitry for a downstream port and room for two PCIe cards. If the box has no USB-C/USB 3.x ports then add it with a PCIe card.

The options I gave will run in the hundreds of dollars while the other answers and comments given so far point to some $8 adapters for plugging USB-C devices into USB-A ports. These adapters should be avoided. They violate the USB spec in ways that create a fire hazard. Plugging a USB-C dock into one of these adapters runs the risk of feeding 100 watts INTO your USB-A port, and it's not made for that. If your computer survives this then the port likely will not. Then you just damaged a very nice computer, damaged a brand new dock, and damaged your $8 adapter.

I know this is not what people want to hear but it is what it is. A quick look at prices tells me a TB2 PCIe breakout box, TB2 cable, and USB-C PCIe card would likely total over $400, but with a 4 port USB-C USB 3.2 card then that's going to be far faster and more ports than that $8 fire hazard.

A potentially cheaper option would be a simple TB3 dock, TB3 to TB2 adapter, and TB2 cable. This could come in under the $400 mark but may offer just one USB-C/USB 3.x port, maybe up to three. It would likely have other ports like USB-A, Ethernet, audio in/out, and SD card slot. Still not some $8 fire hazard.

TB2 dock choices, at least new ones, are going to be slim to none. TB3 docks will often work but it means a $50 TB2/TB3 adapter, a $50 TB2 cable, and losing out on some of the dock features. Any DP ports will likely be dead. The dock will supply power to the upstream USB-C port but the TB2/T3 adapter will block it as no TB2 laptop can use that power, and protecting the computer from power coming in is kind of the point. But then if someone was thinking of a GPU upgrade anyway then think of this as a way to get that USB-C port for "free".

I wrote this long post to make the pros and cons as clear as I could on each option. One big problem is the fire hazard of the cheap USB-C adapters. Did I mention it was a fire hazard? I wanted to leave no question that these adapters are made in a way that they are clearly a fire hazard as they have no protections from keeping a powered hub or dock from putting up to 100 watts into a port made to output something like 10 watts.

One more time, those cheap adapters are a fire hazard so don't touch. Please.

Not the answer you're looking for? Browse other questions tagged imac usb thunderbolt .

1
A USB-A hub or Thunderbolt 2 hub with USB-C ports in it?

2
iMac USB Ports Stopped Working
18
What Thunderbolt to USB 3.0 cables/adapters exist for OS X and Mac hardware?
2
Can you chain a USB hub off a USB port on a Thunderbolt display?
4
ports on 2014 MacBook Pro keep dying
1
connecting display with only usb-c ports to macbook pro 2014 (no usb-c ports)
2
Macbook Pro with failed USB ports - cheapest way to get some functionality
1
iMac 2011 27" Thunderbolt 2 adapter to connect Thunderbolt 3 hub
0
Let me understand the Thunderbolt/USB 4 ports of the new iMac