What is the name of the small circuit board above the trackpad that the flex cable connects to on the MacBook pro retina 2015 13"?

My keyboard and track pad are not working and I'm thinking it's neither the keyboard nor the track pad nor even the flex cable. When I was replacing the flex cable the circuit board that the flex cable connect to (from the logic board) short and sparked - somehow I'd forgotten to turn of the laptop.

This is the small board located below the battery above the track pad on the MacBook Pro Retina 2015 13". I guess I need to replace that board. But I don't know what it's called. Does anyone here know? 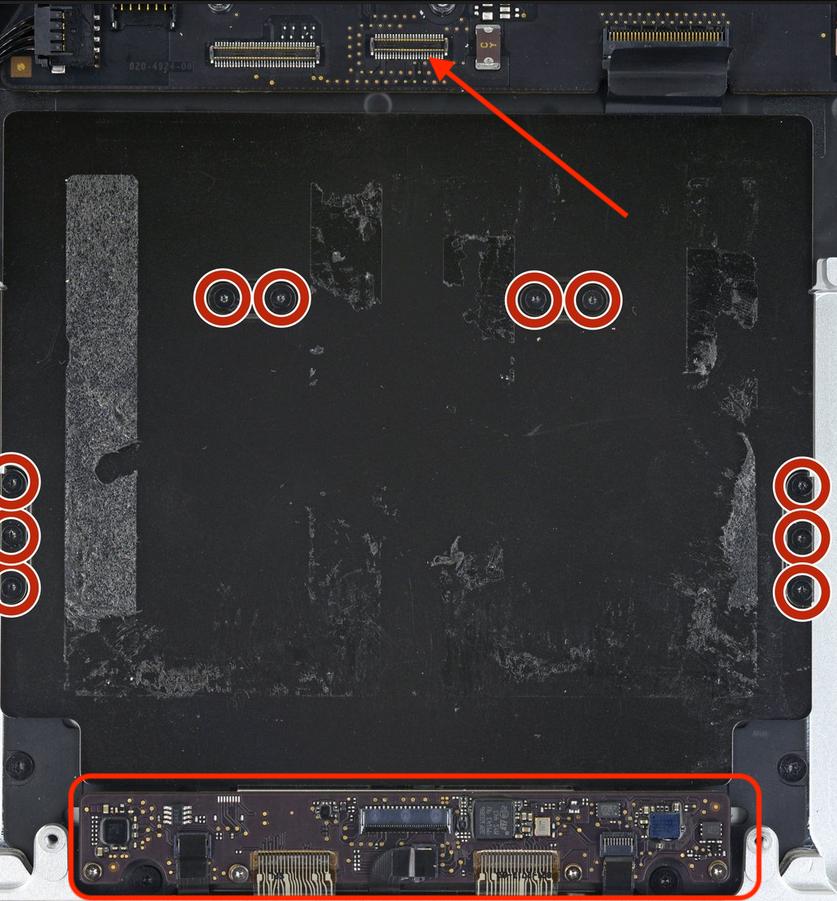 If what you're referring to is what's identified by the red square at the bottom of the image above, then it's the PCB. It's not sold as a separate assembly (AFAIK) and you have to replace the entire track pad assembly (PN# 923-00518). If it's the top portion (red arrow), you have to get the logic board repaired/replaced.

It's possible you could buy a salvaged track pad from eBay just to get the PCB, but it's an "unknown." You could end up getting a track pad with a bad PCB again, but if the price is good, it may be worth the gamble.

Finally, if you got a spark when connecting the flex cable, replace the flex cable as well. When you see a spark, that means enough voltage passed through the cable to arc which could have permanently damaged the cable - it's cheap enough that you should just do it anyway and not try to salvage a cable of questionable function.

Not the answer you're looking for? Browse other questions tagged macbook-pro hardware trackpad repair logicboard .

4
What is the cable that connects the logic board to the display in a Macbook Air?
1
MacBook Pro retina, hardware repair - advice
1
How can I repair a broken key of a new MacBook Pro 15'' Retina 2015?
4
MacBook Pro shuts off on battery power with new battery
1
Replacing a macbook air 2016 I/O Board and Flex Cable
2
Keyboard and Trackpad behave erratic MacBook Pro 13 (early 2015)
0
No backlight on Macbook Pro 2015 and backlight fuse is burned out
1
2015 MacBook Pro battery replacement at Apple store