When this happens, the MacBook doesn't even give me the option of using the correct resolution in system preferences - even if I Option-click on Scaled, the highest resolution available is 3840x2160. This makes me suspect it's using DisplayPort 1.2 instead of 1.4, because I believe that's the maximum resolution DP 1.2 supports.

I mainly use the ThunderBolt 3 cable that came with the monitor, but I also tried a short passive TB3 cable - same results.

It also forgets the arrangement of the display relative to my MacBook's screen when using the wrong resolution; it remembers when it uses the correct resolution.

In 🍏 > About This Mac > System Report... > Graphics/Displays, it has the display connected to the Radeon Pro 550X with the following info:

I'm currently on macOS Catalina 10.15.4, but this also happened on previous versions, including Mojave releases.

It also sometimes turns on HDR mode when using the wrong resolution, which just has the effect of making everything a little darker. I think that started with the Catalina update.

After reading Incorrect external monitor resolution detected, true resolution not available I went into the Color Sync Utility and Verify found one issue, but Repair couldn't fix it:

I also noticed that under Profiles > Computer > Displays there are 4 different "LG HDR 5k" entries. Not sure if that's related or not.

After reading External monitor has wrong resolution I tried resetting the NVRAM / PRAM, but that didn't fix it either.

I also have a Windows PC connected via DisplayPort and it always works at the correct resolution.

Update: It seems to be getting worse. I've only been able to get the correct resolution once since posting this. And it went away as soon as the computer went to sleep.

I tried connecting a CalDigit USB-C Pro Dock (which is actually Thunderbolt 3, despite the name) and then connecting it's DisplayPort output to the monitor. The port on the dock is labeled 4k, but it can actually output the full 5120x2160 resolution - but only at 30hz. The low refresh rate is annoying but better than the fuzzyness of 3440x1440@60hz, so I'm going with it for now. There were a couple of times where I had to disconnect and reconnect the DisplayPort cable to get any image out, but one reconnection fixed it each time, making it far more reliable than the direct TB3 connection.

I've also ordered a generic USB-C to DisplayPort cable, so I'll update again after I've had a chance to try that.

Update 2: USB Type-C to DisplayPort cable behaves about the same as the dock - correct resolution, but only 30hz refresh rate.

Update 3: I got a hold of a Windows laptop with thunderbolt 3, and it worked perfectly on the first try, and again after I disconnected it and reconnected it. So I think that points to a problem with my MacBook.

i have got this same problem. by setting monitor to displayport version 1.2 i was able to run it in native resolution (5120x2160) in 60hz without major problems.

initially when i got the monitor out of the box i was able to run it in native resolution using display port version 1.4. then i installed LG's OnScreen control app on my mac, updated the monitor firmware using the app, the monitor started behaving as you described in displayport 1.4 mode. see the screencaps under about what resolution monitor supports in 1.4 mode and what firmware version im running. 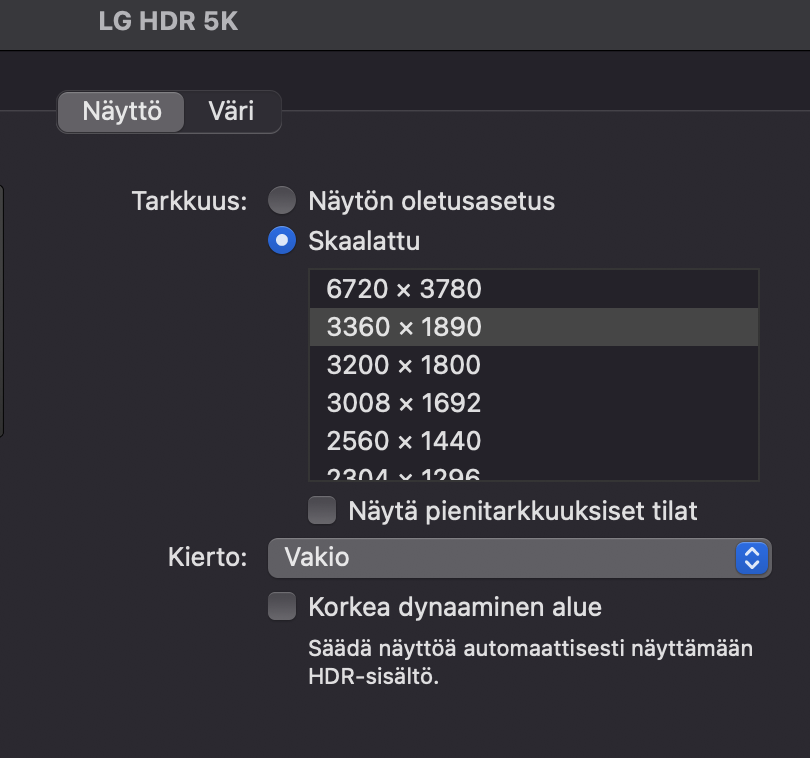 LG support said that this is mac driver problem. i have got no idea how to install any drivers.

im using the DP cable which came with the monitor.

Not the answer you're looking for? Browse other questions tagged macbook-pro display thunderbolt displayport resolution .