I want to completely stop my internal Fusion drive from powering up, since I no longer use it and it is very noisy.

My late 2012 27” iMac came with a Fusion drive, which has long since stopped working correctly. In fact, I long ago began using an external Thunderbolt drive for macOS and documents; now using Mojave 10.14.6.

I no longer use the internal drive(s). I also disassociated the two parts of the Fusion drive and reformatted them as 2 separate drives, one becoming a 120GB SSD, and the other a larger hard disk drive. The Fusion drive is labeled as follows: “Type: SATA Internal Physical Volume” “Device: disk1s2”. The SSD part of the disk still usually mounts. The SATA hard drive only mounts occasionally at start-up, and often dismounts itself after unsuccessfully getting stuck reading. (It will show up for a while sometimes and start to show the hierarchy, before shutting down.)

I prefer not to physically open the iMac to remove the drive (apparently, it's not a simple operation).

My big problem is the noise from the internal disk trying to spin.

I would like to completely disable the internal Fusion drive. I see some suggestions online from many years ago, and many previous versions of macOS, using Terminal commands, but am unsure if they would still work, and I don’t have much experience.

I want to completely stop my internal fusion drive from powering up, since I no longer use it and it is very noisy.

You cannot prevent your mechanical drive from powering up.

It’s a standard 3.5” SATA hard drive with a power connector directly connected to the power supply. There’s no switch or command you can issue that will cut off the power to the drive. Repartitioning it and wiping it clean won’t prevent it from spinning up and doing its periodic reads. 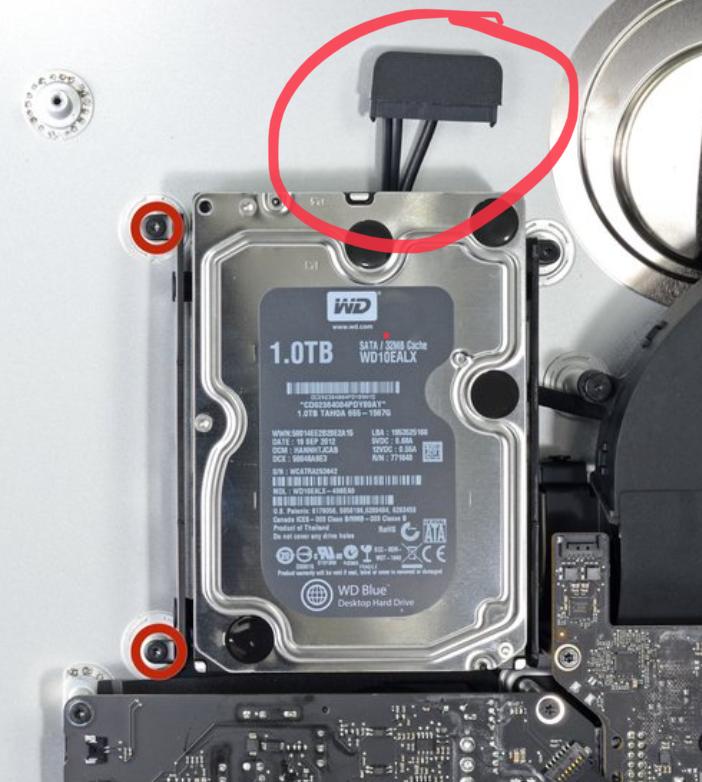 The only solution is to disconnect it.

However, since you have to go through the trouble of cutting through the adhesive holding the glass, you might as well upgrade the drive to an SSD. I’ve done this exact procedure - it’s not difficult, just time consuming.

Not the answer you're looking for? Browse other questions tagged hard-drive imac fusion-drive .

5
Is there room for two drives in the 27" 2012 iMac?
1
Fusion drive is not working although the system can find the SSD
6
iMac 27" late 2012 SSD upgrade
2
Replace Hard Drive in iMac with Fusion
1
Mac Mini 2012: Cant Boot after moving SSD from external USB3 to internal SATA
0
Is it possible to add an SSD module to an iMac 27" Late 2012 model to create a fusion drive on that?
0
Mount a previously internal and encrypted HDD as an external drive
1
iMac 27 How to restore a SSD made invisible after formatting a fusion drive from APFS to HFS+